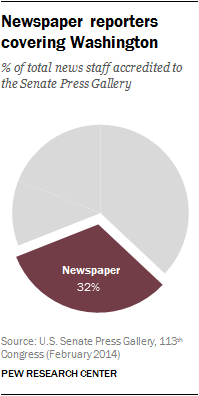 After a period of cutbacks that reached a fever pitch around 2008, the decline of legacy media’s Washington presence didn’t stop. Instead, there continued a quiet retreat, with newspapers reducing their ranks on the Hill and in some cases, closing bureaus.

Total daily newspaper staff declined by 5% between 2009 and 2014; the reporting staff for smaller local papers decreased even more. The staff of mainstream wire services, which provide a large share of local communities’ news about national affairs, remained flat.

Daily newspapers, already cut to the bone, have by no means disappeared from the Washington press corps. But their presence has continued to winnow. According to the Press Gallery, there were 576 daily newspaper staff accredited to the Hill as of 2014, the most recent data available. That is down from 608 in 2009 and from a peak of more than 800 in the late 1990s. Altogether, newspaper staff on the Hill accounted for 32% of all journalists accredited to the Press Gallery in 2014, down slightly from 37% in 2009. 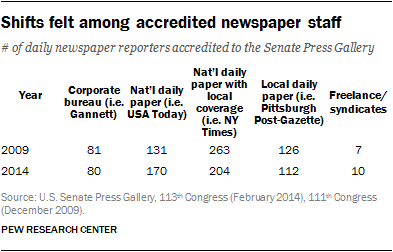 During the most recent five-year period studied (2009-14), newspaper staff declines in Washington were felt slightly more heavily by individual local papers than large national papers. Among these large, primarily national papers – some of which cover chiefly national affairs, such as USA Today – and others that focus heavily on local affairs as well, such as The New York Times, the story was mixed. Some increased their accredited Washington staff, while others scaled back during the time period studied. 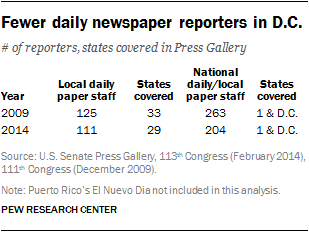 Among smaller daily papers though (referred to in this report as local daily papers), whose correspondents cover Washington on behalf of their communities in the states, the numbers decreased by 11%.2

In addition, slightly fewer states are now served by a local daily newspaper reporter today than was the case five years earlier. In 2009, 125 accredited reporters covered Washington for local daily newspapers in 33 states. By 2014, that number had dropped to 111 reporters in 29 states. In some cases, this meant a Washington bureau of five became a bureau of three or four. But in other cases, a paper ended its presence in Washington altogether. Between 2009 and 2014, 19 local newspapers, together representing 16 states, had disappeared from the Press Gallery list, though in that space of time, eight papers established or reestablished their presence in Washington by sending someone new to the Hill. And since that time, more papers have closed or not filled their bureaus, including The Louisville Courier-Journal and The Orange County Register. Altogether, as of 2014, 29 states had a local newspaper correspondent based in Washington, down from 33 in 2009. 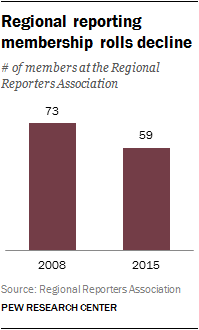 Two other data sources reinforce the strain on local reporting power, traditionally a stronghold of daily newspapers. The Regional Reporters Association (RRA) – an organization for journalists who cover the nation’s capital on behalf of communities outside of Washington – has 59 members on its list as of 2015, down from 73 in 2008. And that number is down from the roughly 200 members that belonged to the group in the mid-1990s.

Hudson’s Washington News Media Contacts Directory has also charted the decline of bureaus in Washington. In 2015, the number of daily newspapers with their own Washington bureau was down to 27 from 39 in 2008, a decline of nearly one-third. The number of states that were served by such a bureau went from 27 to 20 during the same period.

While the decrease in bureaus points to a larger pattern, the necessity of a brick and mortar office space itself is under reconsideration by some Washington correspondents, especially those who operate alone. “I actually do my job, I think, more efficiently from home, because I live on Capitol Hill,” said Mike Coleman, who covers Washington for the Albuquerque Journal.

And while many communities are still served by a newspaper that draws upon a corporate parent’s Washington bureau for coverage, these are fewer in number as well. In 2008, 262 papers were served by the Washington bureau of a corporate parent, according to data from Hudson’s. By 2015, that number had dropped to 198, as companies such as Advance Publications folded their operations.

Mainstream wire services (The Associated Press and Reuters), which provide much of the national reporting that appears in local papers around the country, held steady during the five years studied, with a combined 216 reporters accredited to the Press Gallery. That amounts to 12% of the total number of journalists accredited to the Press Gallery, which is about the same as it was in 2009 when wire services accounted for 13%.

Wire services have maintained a foothold on the Hill and serve a critical role by supplying copy for newspapers and other publishers around the country. This report’s content analysis reveals that, in a sample of eight daily newspapers, wire services accounted for nearly six-in-ten of all stories about national government coverage appearing over a roughly four-month period. The majority, though not all, of the wire content appearing in these papers came from The Associated Press – an organization which, according to the most recent data from the Senate Press Gallery, accounted for 121 of the 1,782 reporters accredited to cover Congress.

What is not clear in the data is the orientation of these journalists – specifically, the extent to which some serve particular states and regions around the country, monitor the committee activities and votes of specific members of Congress, or track the decisions made at specific agencies which might have implications for communities outside the Beltway. The Press Gallery lists include journalists’ names, but not their assignments. Detailed information was not found on the AP’s website. And multiple attempts to obtain information directly from the AP Washington bureau were unsuccessful. There is some suggestion in the content analysis that most are nationally focused, or at least produce nationally oriented coverage, as the vast majority of wire stories carried in the newspapers studied did not contain a local angle.

Whether national or regional in scope, it is clear that at least in local newspapers, they play an outsized role in delivering news about federal government.

Next: 5. Foreign press on the Hill - a slight decline
← Prev Page
Page2Page3Page4You are reading page5Page6Page7Page8Page9Page10Page11Page12
Next Page →

Today’s Washington Press Corps More Digital, Specialized 1. The journalists covering Washington and whom they work for 2. The numbers overall 3. The further rise of niche and digital media
4. Newspapers and wire services: a strained link from Washington to local communities
Daily newspapersWire services
5. Foreign press on the Hill - a slight decline 6. Broadcast news outlets 7. Who provides coverage of the federal government to local communities 8. How it all adds up for the reader 9. The role of wire services Acknowledgements Methodology