Getting a sense of how the presence of television and radio organizations in Washington has changed in recent years requires turning to a different data source than the Senate Press Gallery, which supports the bulk of the analysis above.

Television and radio organizations are instead accredited in the Radio and Television Gallery, which as of 2014 accredited more than 3,500 news personnel. While that is a much larger number than in the Press Gallery or other galleries, its makeup is also somewhat different in that it includes not just reporters but also producers and videographers. Still, the data offer a sense of how the Washington footprint of broadcast and cable news operations has shifted. 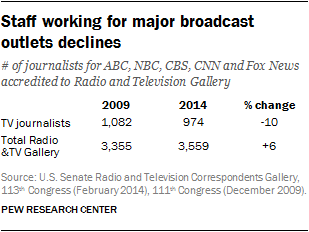 Collectively, national television news operations have pulled back somewhat in terms of total number of Washington staff, according to the data. In 2014, the combined accredited staff for CNN, Fox News, CBS, ABC and NBC (which includes MSNBC) shrunk by 10% to a total of 974, now accounting for just over a quarter (27%) of the more than 3,500 journalists accredited by the Radio and Television Gallery. 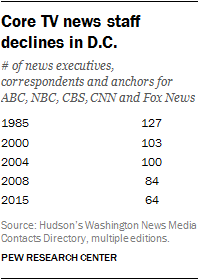 Another source that tracks broadcast entities in Washington, Hudson’s Washington News Media Contacts Directory, measures something different – the number of news executives, correspondents and anchors for the TV news divisions in Washington. Those numbers reinforce the sense of scale-back: Hudson’s listed a total of 64 core TV news staff for these networks in 2015, a number that is down by nearly a quarter from the 84 staff listed in 2008 and half the number of staff that were listed in 1985.3

Local broadcasting with a link to Washington remained relatively stable during the period studied. But in most cases, a Washington bureau serves dozens of stations in multiple states.

Local broadcasters represented by a corporate bureau are still down from their peak in the mid-1980s, but the numbers have held steady over the past number of years. According to Hudson’s, three companies with a Washington bureau provide content to a total of 93 local broadcast and cable TV stations as well as AM radio stations, about the same as the 92 stations served by four parent companies back in 2008. And at least one company has announced it is opening a new bureau. Still, the total number of stations served is down from 146 in 1985.

A few local stations support their own correspondent in Washington, according to Senate gallery data, including Alaska Public Radio and St. Louis Public Radio, whose operations merged with a digital nonprofit, St. Louis Beacon.

Next: 7. Who provides coverage of the federal government to local communities
← Prev Page
Page2Page3Page4Page5Page6You are reading page7Page8Page9Page10Page11Page12
Next Page →

Today’s Washington Press Corps More Digital, Specialized 1. The journalists covering Washington and whom they work for 2. The numbers overall 3. The further rise of niche and digital media 4. Newspapers and wire services: a strained link from Washington to local communities 5. Foreign press on the Hill - a slight decline
6. Broadcast news outlets
7. Who provides coverage of the federal government to local communities 8. How it all adds up for the reader 9. The role of wire services Acknowledgements Methodology