It is one thing to break apart the various kinds of national government reporting and compare them against each other. But ultimately, what is the mix of coverage that a typical reader is getting when all of that reporting is considered in sum? As noted above, in the four local papers with a D.C.-based correspondent, the stories produced by those reporters accounted for just 8% of the total coverage. This suggests that even if the substance or style of their reporting were inherently different, that alone would not lead to a marked difference in the overall style and substance of the news these readers receive. Yet there are ways in which the federal government coverage in the four papers with a reporter based in D.C. looked different than in the four without, differences that go beyond just that 8% of stories from D.C. reporters. 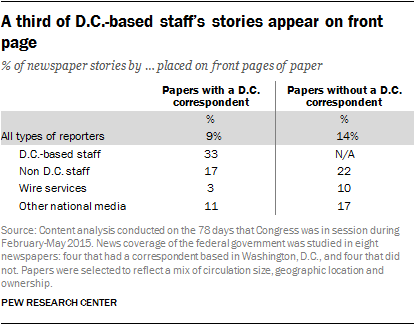 Newspapers with their own D.C. correspondent are likely to showcase that reporter’s work. The stories from D.C.-based reporters are far more likely than other national government coverage to appear on the front page of the paper. A third (33%) of the coverage from these reporters appeared on the front page. That would amount to about nine stories per paper over the time period studied, about twice as common as coverage from non-D.C. staff (17%), three times as likely as coverage produced by an outside national media outlet like the Washington Post and 10 times as likely as wire copy.

Another way of looking at it is to consider the mix of front-page national government coverage across these four months. Here, the greater number of stories from other types of reporters comes through, though coverage from D.C. reporters still weigh heavier than their portion of total coverage. Stories from D.C.-based staff accounted for 28% all front-page stories, which is similar to those from non-D.C. based staff (33%) and national media (26%), while wires accounted for less, 14%.

In papers without a D.C.-based reporter, wires accounted for nearly half, 45%, of all front page stories, while non-D.C. based staff account for 32% and other national media account for 24%.

It is then in front-page coverage– the lead national government story of the day – where most of the difference lies for readers of papers with and without a staff journalist representing them in D.C.

More weight on reporting from the nation’s capital

In that same vein, readers served by newspapers with a correspondent in D.C. get more reporting in total from the nation’s capital.

A clear majority (57%) of national government stories appearing in papers with a D.C.-based reporter originate from D.C. That compares to 45% of stories in papers without someone stationed there.

This is not solely due to the D.C. correspondents. In those papers, 21% of the stories written by staff members not based in Washington still have a D.C. dateline. That is almost twice as much as the 12% of staff-written stories in the papers without a D.C. presence. The difference suggests that a paper supporting a Washington correspondent might be more likely to send other staff to the capital as well to report on a particular story. What’s more, even wire and national media stories that run in these papers are more likely to have been reported in D.C.: 64% of wire stories and 59% of stories from other national media outlets in papers with a D.C. correspondent, compared with 55% and 47% in newspapers without one.

Papers with a D.C.-based correspondent offer no more focus on the local area than papers without

But one result of having a greater presence in D.C. seems to be a greater emphasis on what the news means for federal institutions rather than citizens. 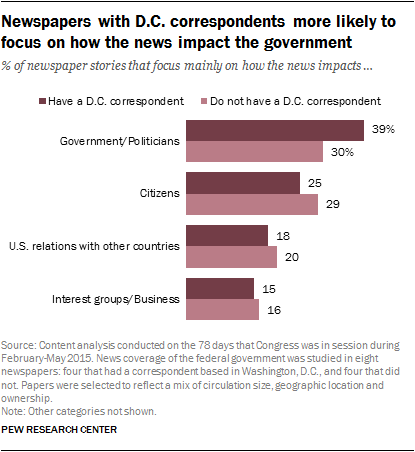 There may well be other aspects not studied here that come through in papers devoted to having an invested presence in D.C. And it was clear in our conversations with several D.C. correspondents that they place a high value in being present in the capital on a day-to-day basis, of the serendipity and intimacy of being in town, even if their interactions with others are increasingly mediated by digital communication technologies.

Mike Coleman, D.C. correspondent for the Albuquerque Journal, argues that being in Washington results in a “less canned” style of reporting. “I think you establish better relationships with the people you cover here. You can get them on the phone, and if you can’t get them on the phone, you can show up and just ask them what you need to ask them,” said Coleman.

The presence of reporters in the halls of Congress might put lawmakers and their staff on the defensive. But according to Marla Romash, former press secretary for Sen. Chris Dodd (D-Conn.) and Vice President Al Gore, there are benefits for both sides. “It was very important to me to be face-to-face with a reporter or a journalist and be able to talk to them in a way that allowed me to really understand how they were receiving the information that I was providing.”

And some lawmakers are out there in plain sight, just waiting for someone to pay attention to them. The Texas Tribune’s D.C. correspondent Abby Livingston described a scene in the House Gallery where reporters flocked to a handful of celebrity House members. Meanwhile, the rest “just walk by and no one ever asks them anything.” In Livingston’s view, reporters are, yes, a necessary organ through which officials communicate with their constituents, but journalists need to hold them accountable by getting in the way. When hundreds of legislators are “walking around as anonymous people at the Capitol,” said Livingston, “that’s sort of frightening.”

At the same time, there was, from many, a recognition of the challenge justifying the funds for a D.C.-based reporter when budgets are so tight and only getting tighter. “If your financial condition as a metro paper is so dire that you can’t afford a local city hall reporter it’s pretty hard to justify a Washington correspondent,” remarked Alexander, former Cox D.C. bureau chief and Washington Post ombudsman. And Shesgreen may have summed it up for many when she spoke of the possibility of the Washington bureau being cut saying, “Especially for regional reporters, that’s the perennial fear.”

Next: 9. The role of wire services
← Prev Page
Page2Page3Page4Page5Page6Page7Page8You are reading page9Page10Page11Page12
Next Page →

Today’s Washington Press Corps More Digital, Specialized 1. The journalists covering Washington and whom they work for 2. The numbers overall 3. The further rise of niche and digital media 4. Newspapers and wire services: a strained link from Washington to local communities 5. Foreign press on the Hill - a slight decline 6. Broadcast news outlets 7. Who provides coverage of the federal government to local communities
8. How it all adds up for the reader
D.C. correspondent given prominenceMore weight on reporting from the nation's capitalPapers with a D.C.-based correspondent offer no more focus on the local area than papers without
9. The role of wire services Acknowledgements Methodology