After several years of buildup, foreign news organizations have leveled off their investment in Washington journalism, and in some areas, have scaled back.

There are two main organizations that provide information on the number of foreign journalists based in Washington. One is the Senate Press Gallery, which accredits journalists working for foreign news organizations specifically to cover Congress. The other is the U.S. State Department’s Foreign Press Center in Washington (FPC), which credentials a wide range and substantially larger number of foreign journalists in Washington, covering issues well beyond Congress. While this report utilizes data from that both sources, the primary source used is the Press Gallery – which provides a figure that is more comparable to the number of journalists for other kinds of organizations, such as daily newspapers. 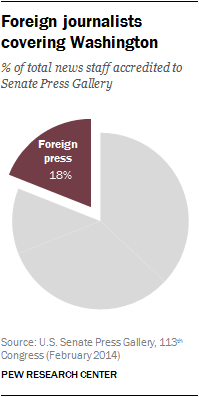 The FPC shows much more dramatic decline in the number of foreign journalists in Washington. In 2015, 1,100 foreign correspondents were credentialed with the FPC in Washington, more than three times the number credentialed by the Senate Press Gallery. Their roster contains a broader array of foreign journalists than is included in the Press Gallery, including short-term visitors and those covering issues and institutions well beyond Congress. That is down by about a quarter (26%) from the 1,490 who were credentialed in the fall of 2008. It is not entirely clear what this steeper decline is tied to, though changes in the news cycle, reporting tours and special programs for foreign journalists tied to the FPC may be factors. 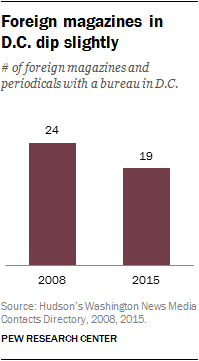 Finally, yet another source – Hudson’s Washington News Media Contacts Directory – paints a similar picture when it comes to foreign magazines and other kinds of periodicals. In 2008, Hudson’s counted 24 such organizations that operated a bureau in Washington. By 2015, the number had inched downward to 19.

Altogether, the data suggest that the foreign media presence in Washington has decreased in recent years, but at least at the Congressional level, the decline has been minimal.

Today’s Washington Press Corps More Digital, Specialized 1. The journalists covering Washington and whom they work for 2. The numbers overall 3. The further rise of niche and digital media 4. Newspapers and wire services: a strained link from Washington to local communities
5. Foreign press on the Hill - a slight decline
6. Broadcast news outlets 7. Who provides coverage of the federal government to local communities 8. How it all adds up for the reader 9. The role of wire services Acknowledgements Methodology