As legacy print media continue to scale back their presence on the Hill, niche and digital media have expanded.

According to analysis of data from the Senate Press Gallery, 662 journalists from niche outlets and broad-interest websites were accredited to the Gallery in 2014, a number that increased by about one-third (32%) from 2009 levels.

Together, those journalists account for fully 37% of the 1,782 news staff accredited to the Press Gallery – a greater portion of the total than either newspapers or wire services.

Some outlets represented in this group are both niche and digital-native, while others are niche with a legacy platform like print, and still others are digital-native with a broad interest focus. Together the group amounts to 662 reporters, but it is also worth breaking this down into the three sub-groups: reporters for broad-interest websites, for niche digital-native and then for niche overall.

Reporters for broad-interest news websites have only emerged in the Washington press corps in recent years. These are outlets such as The Huffington Post and Buzzfeed that publish on a daily basis and aim for a general audience. All told, 73 journalists working for such an organization were accredited to the Press Gallery in 2014 (in 2009, just two journalists who were working for a broad-interest website – The Huffington Post – were accredited to cover Congress). Some of these sites reach tens of millions of visitors per month. The Huffington Post alone increased its accredited staff in Washington to 39 in 2014, operating out of a bureau on Pennsylvania Avenue, across from the White House, after starting out in a row house in Dupont Circle. “I think there’s a bit of a renaissance going on,” said the organization’s Washington bureau chief, Ryan Grim, about the bumper crop of digital publishers that have now planted a flag in Washington. 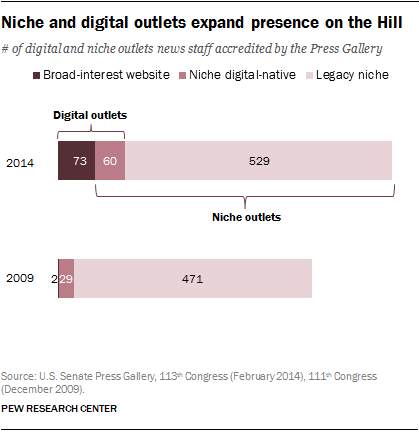 There’s been more growth even since the 2014 Press Gallery was published. The Daily Beast and The Texas Tribune are among the digital publishers that have had staff newly accredited to the Gallery as of 2015.1 Vice Media, while originally launched as a print magazine in 1994, created a digital news brand called Vice News in 2013; its staff members were also added to the Press Gallery after the 2014 list was published.

Another group of digital journalists report for niche digital-native sites – a total of 60 in 2014, double the 29 in 2009. These journalists work for publishers that focus on a single niche topic, yet even among these, most are public facing, such as Kaiser Health News or Inside Higher Ed.

In total then, by 2014, 133 accredited reporters worked for a digital-native outlet, either broad-interest in nature or focused on a niche topic, a four-fold increase from 2009 levels when 31 journalists working for any kind of digital outlet were accredited to the Hill.

There is also another group of journalists not in the Press Gallery at all, but housed within the Periodical Gallery – a separate list compiled by the Senate staff. One notable example here is Politico, which more than doubled its accredited Washington staff from 43 to 112 between 2009 and 2014. Talking Points Memo and Townhall – two politics websites with no accredited staff in 2009 – had a combined 19 in 2014. Newer entrants in the past year include Vox Media, which launched Vox.com at its Washington headquarters in 2014.

For all the additions to the Washington press corps, however, few of these journalists work for digital-native publications whose mission is to serve a local community. Some online publications, many of them nonprofit, have started sending a correspondent to Washington, including MinnPost and Connecticut Mirror and now, The Texas Tribune (The St. Louis Beacon had maintained its own presence in Washington before merging with St. Louis Public Radio). But these amount to a small fraction of the total number of journalists staffing digital news operations more generally, which often focus on national politics rather than the local or regional implications of what happens inside the Beltway.

Another way of looking at the data is to consider the rise of niche outlets as a whole, in which there is some overlap with the digital outlets described above.

As of 2014, there were 589 accredited journalists working for a niche outlet – covering topics such as finance, energy or a specific government agency. This is more than the 500 in 2009 and is up by 76% since 1997, according to our earlier research on this topic. Some work for newer digital outlets, described above. Others are more established legacy organizations. And many work for trade publications, which were discussed in detail in a 2015 article by the Washington Monthly. These publishers continue to fill the Press Gallery with reporters and jockey for market share in a highly competitive environment. In a few notable cases, the big have gotten bigger: Bloomberg News went from having 116 reporters accredited to the Press Gallery in 2009 to 193 in 2014. Even here, though, change continues apace; in 2015, Bloomberg announced staff cuts at its Washington bureau.

Next: 4. Newspapers and wire services: a strained link from Washington to local communities
← Prev Page
Page2Page3You are reading page4Page5Page6Page7Page8Page9Page10Page11Page12
Next Page →

Today’s Washington Press Corps More Digital, Specialized 1. The journalists covering Washington and whom they work for 2. The numbers overall
3. The further rise of niche and digital media
4. Newspapers and wire services: a strained link from Washington to local communities 5. Foreign press on the Hill - a slight decline 6. Broadcast news outlets 7. Who provides coverage of the federal government to local communities 8. How it all adds up for the reader 9. The role of wire services Acknowledgements Methodology