In terms of the numbers of outlets, the largest component of the growing digital news world is the smaller news site. A large majority of them are less than a decade old, about half are nonprofits, most have staffs of five or fewer and many also rely on volunteer and citizen contributors. Their greatest area of focus is local news coverage. 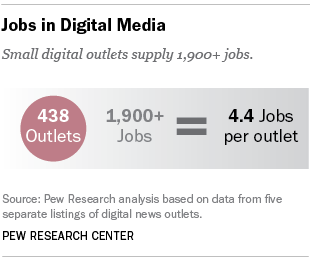 They can be economically shaky, as exemplified by what happened at Patch, the ambitious seven-year-old local digital journalism experiment. In the last year, two major rounds of cutbacks—that by some accounts have reduced the workforce by three-quarters or more—have meant the loss of hundreds of local digital news jobs across the country.

While the small and local nature of these sites makes it impossible to get an absolute tally, many either belong to journalistic organizations or have taken part in surveys. Pew Research used five of the largest compiled lists of these outlets.

One source was the Columbia Journalism Review’s Guide to Online News Startups, which compiled a list of 277 outlets. Another was the membership of the nonprofit Investigative News Network, which includes 73 digital native outlets. In addition, Pew Research compiled data on 172 nonprofit news organizations that were part of its 2013 report on the nonprofit news landscape. We also looked at 117 organizations that are part of the Local Independent Online News Association. Another source was Michele’s list, a collection of 205 digital news organizations amassed by Michele McLellan, a journalist and consultant who has concentrated on the local news environment.

Combining all five sources and eliminating overlapping outlets, defunct and legacy organizations and those outlets for which there were little data available, Pew Research identified a total of 438 digital news organizations that produce original reporting on a regular basis. Of those, Pew Research found staffing data for 329 of them—which combined to produce a total of 1,432 full-time jobs, the vast majority of which are editorial. That comes to an average of 4.4 jobs per outlet. Using that average figure, we then multiplied the other 109 outlets for which there were not staffing data by 4.4 workers. Based on this analysis, Pew Research estimates a total of about 1,900 editorial jobs at the 438 outlets.

The data also indicate that many of these jobs are quite new. Indeed, 29% (120) of the 414 outlets for which there was founding year information have started since 2010. And 56% (230) began in the period between 2005 and 2010. The biggest single year for expansion was at the height of the recession. There were 103 digital native startups in 2009, the same year that the American Society of Newspaper Editors recorded the loss of 5,200 newspaper newsroom jobs. That suggests many small digital organizations were formed to try to fill perceived reporting gaps created by legacy layoffs exacerbated by a bad economy.

This universe of smaller digital news organizations also reflects the growth of the nonprofit business model in news. Of those 402 outlets for which we could ascertain corporate status, about half (204 outlets) were registered as nonprofits, meaning, among other things, that they are eligible to accept tax-exempt contributions and obligated to plow any surplus revenue back into business operations rather than paying shareholders or investors. Slightly less than half the outlets were operated as commercial businesses.

Pew Research’s accounting of full-time jobs also reveals the modest staffs at many of these startups. While the overall average came out to about four full-time staffers per outlet, a large majority of sites (241) had three or fewer employees.

One reality of that environment is that many of these organizations rely on part-time workers and volunteers to help produce content. Of the 93 nonprofit outlets that responded to the 2013 Pew Research survey, more than half reported having part-time paid employees while almost three quarters said they relied, at least in part, on unpaid volunteers, interns or contributors.

On one level this reliance on non-paid workers reflects the lean budgets of many of these outlets. But it also reflects some of the genre’s editorial ethos—that covering local communities or neighborhoods at a grassroots level is best accomplished with contributions from regular citizens.

Next: What the Digital News Boom Means for Consumers
← Prev Page
Page1Page2Page3You are reading page4Page5Page6Page7
Next Page →