In calculating the number of editorial jobs in the expanding digital native news world, Pew Research divided that universe into two main categories. One category encompassed hundreds of outlets with mostly small staffs while the other focused on bigger and more prominent digital news operations with considerably greater job growth, financial resources and reporting capacity.

Combining those two groups, Pew Research was able to account for a total of about 5,000 jobs in the digital news sector. 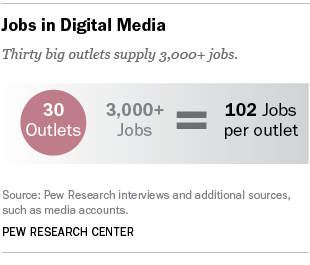 To get a handle on the growth of jobs in the digital news sector, Pew Research reached out to several dozen of the more prominent and larger digital news organizations to ask about staff size and plans for additional hiring and any expansion of the editorial mission. Almost all of these organizations provided information, either via email or a phone interview. In the cases where they did not, information was gleaned from outside sources, including media accounts.

This “Big 30” list of major digital outlets includes a mix of non-profits (seven) and commercial organizations (23), but it tilts far more to the commercial model than does the group of smaller digital sites. Many of these organizations are also young, having sprung up during the economic and media industry recessions. Nearly than half of them—13 of the 30—are six years old or younger. And 23 of them have come into existence since 2005.

Together, they account for a little more than 3,000 jobs, which exceed the combined total for the more than 400 smaller sites by more than 1,000 jobs. Several of them employ hundreds of editorial staffers and many of them employ scores. Perhaps the fastest growing operation is Vice Media, which began 20 years ago as a punk magazine in Montreal and has now expanded into a global news organization. Vice officials estimate their total full-time staff at more than 1,100 full-time employees, although they were not able to separate out the editorial staffers from that overall number. “We have grown exponentially in the last year,” the company told Pew Research. One indication is the 48 new U.S. staffers hired just in the early part of 2014.

The Huffington Post, a digital native veteran that began largely as a content aggregation site in 2005, has expanded its content creation and reports having a total 575 domestic and international editorial jobs. Jimmy Soni, the managing editor of The Huffington Post Media Group, expects the company’s 11 international editions to expand to as many as 15 by the end of 2014. Another one of the larger outlets is Politico. The seven-year-old organization has a number of products, the best known being its 24/7 politics digital outlet. It reports having 186 full-time editorial staffers.

BuzzFeed, which was founded in 2006, says it now has “170 plus” full-time editorial staffers, the vast majority of which were hired in the last year. To provide a sense of this buildup, when Ben Smith arrived at BuzzFeed in January 2012, he was greeted by a managing editor and a half-dozen writers. Now he heads an editorial staff that is about 25 times larger. “Our business side vastly over-performed,” he said, in discussing the rapid build-up of staff.

Another digital organization that has seen substantial growth is 12-year-old Gawker, the irreverent gossipy site that has spawned other brands, such as the sports site Deadspin, the women’s-oriented Jezebel and the tech-focused Gizmodo. In the most recent count, Gawker had 132 full-time editorial employees, nearly triple the 49 it had seven years earlier.

A few years ago, the sports site Bleacher Report was true to its name, relying on fan content with no paid writers. In 2012 it was purchased by the Turner Broadcasting System and now, according to a company official, there are about 50 full-time writers, 45 full-time editors, 20 producers and 16 video editors.

Founded in 2005, Mashable increased its commitment to news with the hiring of Jim Roberts, who has added five more staffers to a news roster that now numbers about 70. One of those hires was a senior science writer from the nonprofit Climate Central to cover environmental issues and Roberts says other big name hires are in the offing to help bolster, among other things, an expansion into entertainment reporting.

A number of the new digital organizations focus on business and technology reporting. Henry Blodget’s Business Insider has grown to 70 news jobs and there are plans to hire as many as 25 more this year. Earlier this year, Blodget, citing digital readership numbers, declared that “Business Insider is now larger than the Wall Street Journal,” although that does not refer to the number of journalists working there.

Re/Code, the new incarnation (launched in January) of Walt Mossberg’s AllThingsD operation at Dow Jones, has 22 editorial staffers. Editor-in-chief Kevin Delaney was the first employee at Quartz in February 2012. The two-year-old outlet from Atlantic Media now employs an editorial staff of about 25. Some 27 editorial staffers work at Tech Crunch. And there are 17 full-timers in editorial at Gigaom.

Some of the better known nonprofit news outlets that focus on investigative journalism have sizable staffs as well. (Some of these organizations pre-date the online journalism world, but they are not part of any legacy news organization and they rely on digital platforms to disseminate their work.) There are 41 full-time news staffers at the youngest of them, ProPublica, the seven-year old investigative outlet founded by former Wall Street Journal managing editor Paul Steiger. The Center for Public Integrity, one of the digital graybeards at 25 years old, employs 38 full-time editorial staffers. And there are 50 editorial employees at the California-based Center for Investigative Reporting, which dates back to 1977.

One nonprofit that has built a reputation for its coverage of state politics, The Texas Tribune, has 23 full-time editorial staffers.

Several of the oldest digital native outlets have traditionally been known for a strong focus on politics and current affairs. Slate, which started in 1996 and was once owned by Microsoft, currently has 50 full-time editorial staffers. Salon, which began a year earlier, is home to 25. TPM (Talking Points Memo), which began in 2000 as a one-person operation, now employs 15 editorial staffers. A newer political site, the four-year-old Daily Caller, has 31 news employees on staff.

One digital news organization created to compensate for the diminishing international reporting in the mainstream media is the five-year-old Boston-based Global Post, which was co-founded by former Boston Globe foreign correspondent Charles Sennott and Phil Balboni, formerly a Boston television news executive. It has 28 full-time editorial staffers, including 13 senior correspondents in various capitals.

Several journalists who operate largely in the digital space represent what New York University journalism professor Jay Rosen calls “the personal franchise model” in journalism. One is Nate Silver, who is building the staff for his new FiveThirtyEight Blog enterprise, which now includes about 19 editorial staffers. The mega-sports channel is also home to another notable digital vertical, Bill Simmons’s’ three-year-old Grantland, which employs 20.

The ultimate personal digital franchise may be Ezra Klein’s eagerly anticipated Project X, designed to produce deep explanatory journalism. Since arriving at Vox Media in January, Klein has been aggressively hiring to fill out a staff that currently numbers about 18 people, according to media reports. First Look Media’s hire of Glenn Greenwald, which created a major buzz around the Omidyar enterprise, represents another extension of the personal franchise model. The initial rollout from First Look occurred with the Feb. 10 introduction of a digital magazine, The Intercept, which debuted with coverage of Edward Snowden’s NSA leaks. First Look executive editor Eric Bates says there are about 20 editorial hires on board already with “very large and robust” hiring planned.

Next: The Smaller Outlets
← Prev Page
Page1Page2You are reading page3Page4Page5Page6Page7
Next Page →