In recent years, a number of legacy journalists—some victims of layoffs or facing the prospect of job loss—have moved to the digital news realm, often at small or medium sized startups.

But the breadth and scope of this migration seemed to change in 2013—and one event in particular emerged as a milestone. That was the July announcement that data wunderkind Nate Silver was taking his FiveThirtyEight blog, a 2012 presidential campaign phenomenon, from The New York Times to ESPN. While the sports network is itself a legacy organization, Silver’s decision to move his popular political blog away from one of the most prestigious print legacy news outlets generated major attention. Then last fall, things really accelerated.

Perhaps the biggest news of October 2013 was the announcement that Glenn Greenwald would join First Look Media, a digital news venture being bankrolled by eBay founder Pierre Omidyar. A number of other journalists, among them former Rolling Stone executive editor Eric Bates, came aboard First Look Media quickly. In February, Matt Taibbi, whose work at Rolling Stone has focused on the misdeeds of Wall Street, was added to the roster along with Andy Carvin, a former NPR staffer known for his prodigious tweeting about the Arab Spring.

BuzzFeed, a site that began branching into more serious news coverage when it hired Ben Smith from Politico in 2012, had already made one significant move in June 2013 when it announced the hiring of the Guardian’s Miriam Elder to oversee an expansion of foreign coverage. Then in October it expanded news operations again, hiring Mark Schoofs—who came from ProPublica after a stint at The Wall Street Journal—to head its new investigative news unit that will include about 10 reporters.

Also in October came the news that Jim Roberts, a former assistant managing editor at The New York Times, was hired as chief content officer at Mashable to oversee a significant editorial expansion there. Roberts said that he doesn’t think the uptick in digital hiring represents the beginning of a legacy media apocalypse, but that it is meaningful. “I still see quality journalists working for legacy journalism,” he said. But “legacy media does need to pay attention” to the shifting bodies, he added. “You’ve got to take this seriously.” 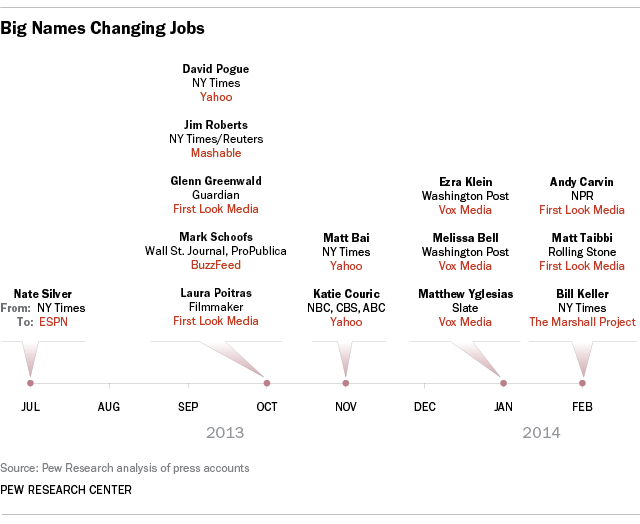 In January 2014, after The Washington Post rejected his proposal for a new journalistic venture at a reported cost of eight figures, 29-year-old Ezra Klein took his Project X concept to Vox Media, a digital native company that also publishes SB Nation and Verve. Among those who quickly followed Klein to his new home were fellow Post staffers Melissa Bell, Dylan Matthews, Max Fisher, Brad Plumer and Sarah Kliff as well as Slate economics blogger Matthew Yglesias.

Then in February, 65-year-old Bill Keller—the former executive editor of The New York Times who still wrote a column there—departed to become editor-in-chief of a digital nonprofit news organization focused on the criminal justice system. A Times article reported that the new operation, called The Marshall Project, would have about a $5 million budget to support a staff of about 30.

And sometimes the competition for talent is between the digital natives themselves as in early March, when the fledgling First Look Media hired away editor John Cook from Gawker, one of the established digital outlets at 12 years old.

If one needed further evidence that digital news is a hot employment market, the flow of job applicants is Exhibit A. A New York magazine story quoted Klein as saying he received more than 600 résumés within three days after announcing Project X. Bates, the executive editor at First Look Media, said that he was so “inundated” with résumés that “I haven’t bothered to count them.”

Ben Smith of BuzzFeed is bullish on the appeal of the digital news sector for job seekers. “I think it’s an incredibly competitive landscape and [BuzzFeed] is investing on a scale that’s very ambitious,” he says. “It’s increasingly difficult [for legacy organizations] to compete for talent.”

Jane McDonnell, the executive director of the 2,100-member Online News Association, said that she sees the shift of bodies from legacy to digital news as “a kind of slow earthquake” and that “legacy media is providing a lot of the talent moving out.” For his part, NYU professor Jay Rosen says newsroom stars “have always left [legacy organizations], but they only went in one direction”—toward big magazine jobs or book writing. Now, he says, the ripening world of digital news beckons.

Next: How Big Is the Digital News World?
← Prev Page
Page1You are reading page2Page3Page4Page5Page6Page7
Next Page →