At a time when print newsrooms continue to shed jobs, thousands of journalists are now working in the growing world of native digital news—at small non-profits like Charlottesville Tomorrow, big commercial sites like The Huffington Post and other content outlets, like BuzzFeed, that have moved into original news reporting. In a significant shift in the editorial ecosystem, most of these jobs have been created in the past half dozen years, and many have materialized within the last year alone, according to this new report on shifts in reporting power. 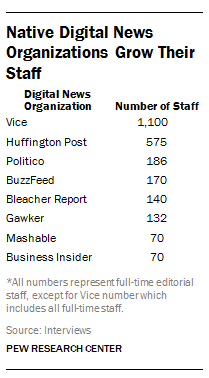 All this movement is merely the tip of the iceberg for a digital native news universe that includes not only dozens of highly publicized national and international organizations, but also hundreds of smaller digital news entities, mainly filling targeted news niches. And it is occurring at a time when print newsrooms continue to shed jobs and when local television news jobs, while holding steady, often are being stretched thinner to produce more content than in the past.

The Pew Research Center made a first effort to put a number on the shifting journalism landscape by using interviews and multiple data bases to account for editorial staffing at 30 major digital news organizations and 438 smaller ones. Those 468 outlets—the vast majority of which started in the past decade—have produced almost 5,000 full-time editorial jobs.1 While that does not represent a complete census of a digital news world, it is a robust a sample as may be possible from a variety of credible sources.

Still, purely in terms of bodies, the growth in new digital full-time journalism jobs seems to have compensated for only a modest percentage of the lost legacy jobs in newspaper newsrooms alone in the past decade. From 2003 to 2012, the American Society of News Editors documented a loss of 16,200 full-time newspaper newsroom jobs while Ad Age recorded a decline of 38,000 magazine jobs, which includes all jobs for the entire consumer magazine sector. Such job cuts continued in 2013 and early 2014—at such big organizations as the Tribune Co. and Time Inc.

The accelerating shift of talent to digital news jobs has significant implications for the U.S. news consumer. Many digital outlets are working to fill reporting gaps created by the strain on resources at traditional outlets—from niche topic areas like education to international coverage to local community news to investigative journalism. One of the larger cohorts—the digital investigative outlets—ranges from the Pulitzer Prize winning ProPublica to the 73 digital news operations in the five-year-old nonprofit Investigative News Network.

Other digital news producers, especially those that have emerged most recently at the national level, are aimed at cultivating new forms of storytelling—from video to crowdsourcing to new documentary styles—and new ways to connect with audiences, often younger ones. A number of legacy outlets are also experimenting with new storytelling and data visualization techniques. But much of the innovation is coming from the digital native sector, with many outlets focused on hiring people with skills and voices “being nurtured online,” as one editor put it.

Some of this coverage, particularly at the local level, can be inexpensive to produce and can require only modest resources. But the question of whether digital news outlets can ultimately replenish the loss of legacy jobs and reporting resources hinges on creating the kind of successful business model or models that have proved elusive. Many native digital outlets are still unprofitable and there is a finite supply of billionaires willing to spend $250 million on a startup. Most analysts say this growing investment in digital news does not mean the industry has figured out a consistent formula for monetizing that news.

Yet even with concerns about the bottom line, many see the rise of digital newsrooms as a significant moment in a transforming media landscape. Not long ago, BuzzFeed content was viewed by some as frivolous click bait. But in a recent speech to Kansas University journalism students, former Wall Street managing editor Paul Steiger mentioned BuzzFeed as “the kind of team I’d want to join,” if he were embarking on a journalism career. Many mainstream journalists may not have even heard of Vox Media before Klein’s Project X alighted there. But when news surfaced last month about 500 across-the-board job cuts at the Time Inc. magazine empire, Slate’s Dave Weigel tweeted, perhaps only half-jokingly: “500 more applications for Vox.”

“This represents something completely new in the journalism ecosystem,” says First Look Media executive editor Eric Bates, who went there in November after a decade at Rolling Stone magazine. “It’s a shifting not only of editorial resources, but a shifting of editorial expertise.”

Have additional data on digital news outlets? Please share it with us to help inform the research.

The data Pew Research used to track the shifting job market in news came from several sources. The staffing data for the 30 larger native digital organizations came primarily from interviews—conducted both via phone and email—with representatives of 28 of the 30 organizations. The staffing information for the remaining two outlets came from media accounts. The staffing data from the universe of smaller sites was derived by merging five lists totaling more than 500 digital news organizations. That figure that was whittled down to 438 when duplicate outlets and sites that were not applicable or about which little data could be found were discarded. The staff numbers for the individual sites came from survey results, information collected by those compiling the lists and staffing levels listed on outlet websites. The job numbers from legacy media outlets came from data compiled by the American Society of Newspaper Editors, Ad Age, the Radio Television Digital News Association and Hofstra University and Pew Research data.

Among the findings in the study:

Next: The Digital Migration Becomes a Stampede
← Prev Page
You are reading page1Page2Page3Page4Page5Page6Page7
Next Page →