While only a minority (38% of tablet news users and 42% of smartphone users during the week) get news multiples times throughout the day, their news habits stand out from those who check in just once a day. And this continuous news consumer group probably carries a good deal of appeal for both news organizations and advertisers. 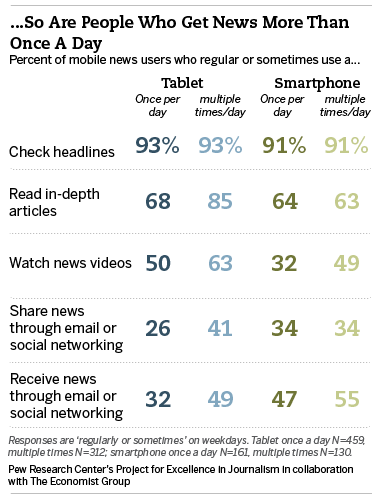 Tablet news users who get news multiple times per day during the week turn to more sources or apps, on their tablet and get news from new sources more often. About a quarter, 27%, turn to four or more sources versus 10% of those who get news just once a day. Instead, a full quarter of once-a-day tablet news users have just once source or app they turn to regularly, and another 11% say they don’t have any regular news sources on their tablet. In addition a full 43% of several-times-a-day tablet news users regularly get news from new sources, compared with just 26% of those who tune in once a day.

Those who get news more often are far more active tablet news consumers. They are more likely to sometimes or regularly read in-depth news articles (85% versus 68%) to watch news videos (63% versus 50%) receive news through email or social networks (49% versus 32%) and to share news with others (41% versus 26%). They are more likely to check headlines daily and when they do so, to end up reading full articles (84% do so at least a fair amount versus 60% of once a day news users).And these multiple-times-a-day news consumers who read in-depth articles are more likely to say they  read articles that they were not initially looking for (80% at least somewhat often versus 67% of one-time-a-day tablet news users) and twice as likely to read back issues of magazines, 44% versus 19%. Heavy majorities of both groups say some or most of the in-depth articles they read are for personal interest, but these multi-time users are twice as likely to read things recommended to them from friends or family (31% versus 16%) and to read things for work (43% say some or most are for work versus 30% of once a day news users).

These several-times-a-day tablet news users also exhibit much more willingness to spend. These more frequent news users are twice as likely to have paid for news on their tablet: 10% versus 4% among those that tend to get news just once a day. Both groups of users notice ads when getting news on their tablet to the same degree but the more frequent users click on the ads they notice more often (26% often or sometimes versus 11% of those who get news one time a day) and end up buying form the ads they click on (26% versus 11%). More frequent tablet users are not more likely to have news subscriptions in general, but they are twice as likely to have a digital only subscription (16% vs. 8%).

Smartphone news users who get news throughout the day during the week show similar tendencies in the range of news activities. They turn to a wider range of sources: 20% regularly turn to four or more versus 6% of once-a-day smartphone news users – 43% of whom turn regularly to just once source. Nearly three quarters, 72%, read in-depth articles regularly or sometimes on their phones versus 57% of once a day news users. They are also more likely share news through email or social networking 41% vs. 31%.

But they don’t exhibit the same greater tendency to interact or purchase things from the ads on their phone or to have digital only subscriptions.

And in what is perhaps the clearest depiction yet of the 21st Century news junky, getting news on mobile devices throughout the day does not make you less likely to turn to print or to your laptop/desktop. Those who get news throughout the day on either the phone, the tablet or both are just as likely to get news on a laptop/desktop and to get news in print as those who use mobile devices once a day for news.