When is the time of day people consume news? (And by implication, when is the best time for potential advertisers, or political actors, to try to reach mobile news consumers?)

Here we find that mobile technology is changing behavior patterns, but in ways that might be more subtle than some might have expected.

To begin with, among those who get news on tablets just once a day during the week, (again just over half of tablet news consumers) the times they check in are fairly traditional ones, similar to those when Americans watched the evening news or read the morning newspaper: 39% get their news on the tablet in the evening between 5 and 9 p.m., while 18% get news early in the morning, before 8 a.m. Another 21% get news on their tablets later in the morning, between 8 a.m. and 12 p.m. Fewer get news late at night, after 9 p.m. (11%).

On the weekend, the one-time-a-day tablet news consumers are split more evenly throughout the morning, midday or evening (with very few consuming news early in the morning or late at night).

However, the behavior of those who check in for news on the tablet multiple times during the day (roughly one-third of tablet news users) is quite different. For these people, the beginning and the end of the day are much more important during the week, perhaps due to the easy, on-demand nature of the devices. About two-thirds of these tablet-based continuous news consumers, 66%, get news in the evening (5 to 9 p.m.) and 56% get news first thing in the morning (before 8 a.m.); 50% check again late at night. And 43% get news later in the morning, between 8 a.m. and noon.

Most of those who get news on the tablet multiple times on a typical weekday also do so more than once on the weekends. But on the weekend, news consumption is spread more evenly throughout the day, though very few check news early in the morning.

The preferred times for smartphone news use are more varied. For those who check in once a day, more prefer sometime before noon to the evening. About a quarter, 24%, of smartphone news consumers who get news once a day do so before 8 a.m., and 30% check in from 8 a.m. to 12 p.m. Far fewer get news in the evening (18%) or late at night (7%). 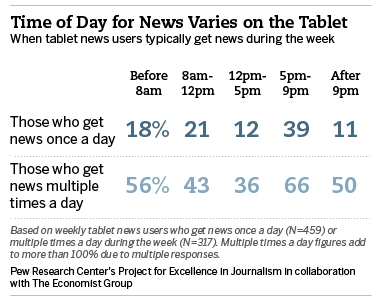 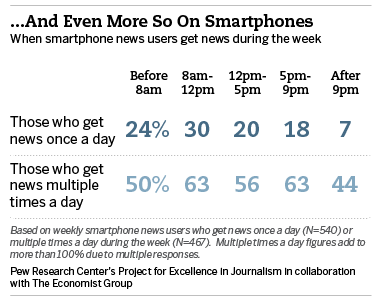 Among those who get news on their phone multiple times per day, the device is a way to start and end the day with news -but not quite to the same degree as with tablets. During the week, half (50%) of these consumers use their smartphones to check in early morning, and 44% do so late at night, but this is smaller than the percent who check in at other times of day (when more than half say they are consuming news). In other words, the smartphone is a way for the continuous news consumer to get the news throughout the day-morning, day and night.

In short, mobile technology is turning news into an activity that can increasingly occur at any time. For more people than not, that still occurs mostly once a day-at least on the mobile devices. But a sizeable number, roughly a third of tablet news consumers and slightly more for smartphone news consumers, are taking advantage of this "always on" feature of mobile devices.