The era of mobile digital technology has crossed a new threshold. 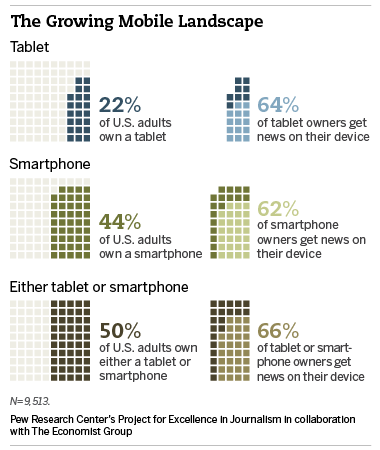 Half of all U.S. adults now have a mobile connection to the web through either a smartphone or tablet, significantly more than a year ago, and this has major implications for how news will be consumed and paid for, according to a detailed new survey of news use on mobile devices by the Pew Research Center’s Project for Excellence in Journalism (PEJ) in collaboration with The Economist Group.

At the center of the recent growth in mobile is the rapid embrace by Americans of the tablet computer. Nearly a quarter of U.S. adults, 22%, now own a tablet device-double the number from a year earlier. Another 3% of adults regularly use a tablet owned by someone else in their home. And nearly a quarter of those who don’t have a tablet, 23%, plan to get one in the next six months. Even more U.S. adults (44%) have smartphones, according to the survey, up from 35% in May 2011.

News remains an important part of what people do on their mobile devices-64% of tablet owners and 62% of smartphone owners say they use the devices for news at least weekly, tying news statistically with other popular activities such email and playing games on tablets and behind only email on smartphones (not including talking on the phone). This means fully a third of all U.S. adults now get news on a mobile device at least once a week.

Mobile users, moreover, are not just checking headlines on their devices, although nearly all use the devices for the latest new updates. Many also are reading longer news stories – 73% of adults who consume news on their tablet read in-depth articles at least sometimes, including 19% who do so daily. Fully 61% of smartphone news consumers at least sometimes read longer stories, 11% regularly.

And for many people, mobile devices are adding how much news they consume. More than four in ten mobile news consumers say they are getting more news now and nearly a third say they are adding new sources.

These findings and others in this report build upon a comprehensive study conducted by PEJ and The Economist Group a year ago that provided an in-depth look at news consumption on tablets among early adopters. The new report, which is based on a survey of 9,513 U.S. adults conducted from June-August 2012 (including 4,638 mobile device owners), probes mobile news habits more deeply across the wider population of users, looks at smart phone use as well, and examines the financial implications of those habits for news.

The survey also finds that consumers have yet to embrace certain features that mobile devices offer. While mobile technology allows people to get news anywhere, and any time, most people get news on these devices when they are at home-and roughly half of mobile news users get news on their device just once a day. Similarly, the use of news apps on mobile devices, which many publishers hoped would be a way to charge for content, remains limited. Most people still use a browser for news on their tablet.

Perhaps most pressing for the industry, the survey shows continued resistance to paying for content on mobile devices. More mobile news users have print-only subscriptions than have digital ones. Just 24% of them are considering exchanging their print subscription for a digital one (though these tend to be younger subscribers, which suggests their numbers will grow).

When it comes to advertising, there are suggestions that ads seeking to deliver a message or reinforce a brand may have more potential than those tied to e-commerce.

Taken together, the data reveal that, even with a broadening population owning mobile devices that offer a range of activities, owners are still drawn heavily to news. What’s more, there is a sizable cohort using mobile devices to broaden and strengthen their news experience, particularly male mobile news consumers who employ both apps and browsers, have a wireless data plan, get news multiple times throughout the day, and across a wide variety of platforms.

Among the detailed findings of the study:

These mobile news users were also asked about their news habits on the conventional laptop/desktop computer. Their responses suggest that even as the population of tablet owners broadens, the idea that we have entered a post-PC era is overstated-at least when it comes to news. The desktop computer remains an enduring part of people’s news consumption-perhaps because during weekdays it is a work tool. Despite all of the convenience of mobile, fully 41% of mobile users who still get news on the laptop and print prefer the conventional computer for doing so. Tablets rank second at 25%, followed by print. The smartphone ranked last. This is a shift from the very early adopters surveyed in 2011 who showed strong passion for their new devices, and it may speak to both the broadening population and a natural settling down as the “newness” factor wears off. 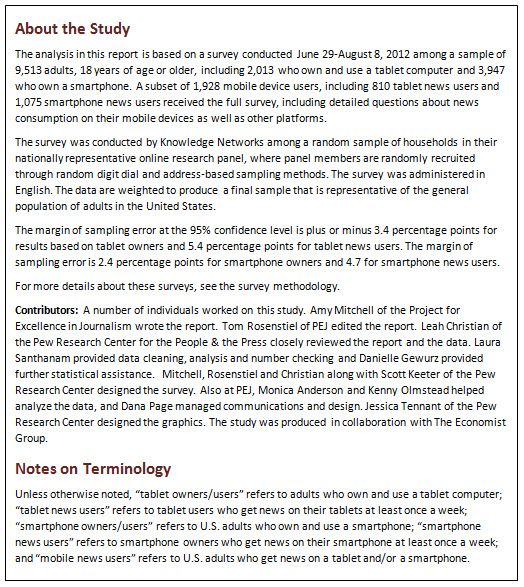 Next: Device Ownership
← Prev Page
You are reading page1Page2Page3Page4Page5Page6Page7Page8Page9Page10
Next Page →