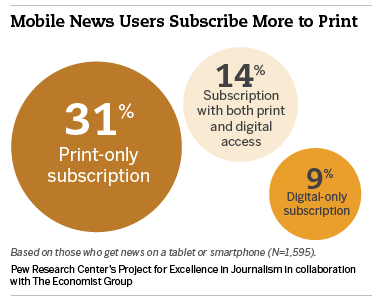 One of the biggest questions about mobile technology-especially tablets-is whether it would establish or re-establish a deeper relationship for consumers with news content. Past research has found that on desktop and laptop computers, people read or watched quickly, even fleetingly.

If the pleasure and convenience of reading on a mobile device that people can hold in their hands and lean back with leads them to stay longer, that might influence people’s willingness to pay for that content. They also might be more likely to notice and even appreciate the advertising accompanying that content.

The survey suggests that the broadening of the tablet universe has not made people more likely to pay for content – or at least to pay for news. Indeed, this broader population of tablet owners was somewhat less willing to pay than the first generation of adopters. Just 6% said they have ever paid for news on their tablet, compared with 14% in 2011.

But the picture is a little brighter when mobile news users (those who get news on a tablet and/or a smartphone) are asked specifically about paying for digital subscriptions.

In all, 19% of mobile news users have some kind of digital news subscription: 14% bundled with print and 9% digital only, with some overlap of those who have both. 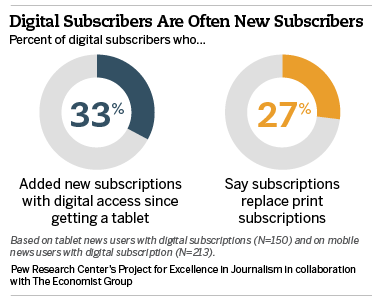 At the same time, though, there appears to be another set of mobile news users who carry a strong loyalty to print news publications. Nearly a third, 31%, of mobile news consumers pay for a print-only subscription, twice the number who said they had paid for a bundled digital print subscription and three times those who pay for digital only, at 9%. The higher print-only rate is true of both tablet news users and smartphone news users. 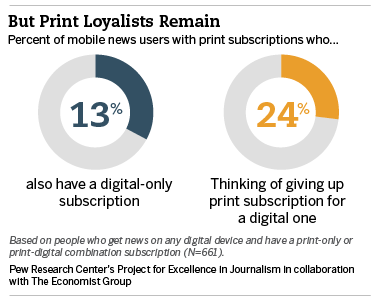 In other words, there are two distinct audiences in mobile, the new digital subscriber and the print loyalist. Mobile is creating new subscribers among the first group and probably increasing the total amount of news consumption of the second. Yet the extent to which the two groups have different preferences and interests represents both an opportunity and a challenge for news organizations.

And increasing the number of new digital subscribers may not be that easy. Of the mobile news users who don’t have any news subscriptions at all, print or digital, only 3% say they are considering paying for one.

Next: Advertising
← Prev Page
Page1Page2Page3Page4Page5Page6Page7Page8You are reading page9Page10
Next Page →