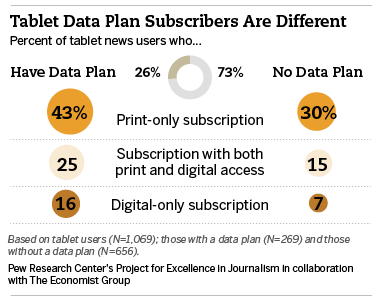 Overall, just 26% of tablet owners have a data plan on their tablet. But this survey was conducted before new "data sharing plans" became available from wireless carriers, which could quickly expand the population that has internet access on their tablet at all times.  It is a population worth watching as their habits stand out in many ways. They are more likely to have iPads than those who do not have a plan (65% versus 48%) and are more likely to get news on their tablet multiple times a day (50% versus 33% for those who don’t have a data plan).

Those with data plans are also more likely to engage in e-commerce through tablet ads. Fully 28% who click at least sometimes, buy things – versus 13% without a plan and 18% overall. Across the wider population this means that 14% of all people with a data plan sometimes buy things from ads they see versus 5% of all those who do not have a plan.

[1] Those with data plans may also have more opportunity to notice different ads. Within many sites or apps, the ads on the page rotate or change for those who are connected to the internet, while those who are not connected see just one static ad or at times, se no ads at all. The same may be true in the ability to click on them.

Next: The App vs. Browser Debate Continues
← Prev Page
Page9Page10You are reading page11Page12Page13Page14Page15Page16Page17Page18Page19
Next Page →