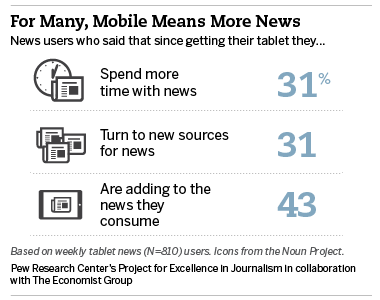 What does the growing expansion of mobile mean for news consumption overall? Are people who own mobile technology getting more news now that they have more ready access to it? Or are they merely replacing one platform with another? Here, the findings are as strong as in 2011, and in some cases even stronger, in suggesting that mobile technology is increasing news consumption.

While most, 55%, of tablet news users say the news they get on their tablet is replacing news they would have gotten in other ways, nearly as many, 43%, say the news they get there is adding to the overall news they consume.  And when we look at those who get news across all four of the platforms we asked about (tablet, smartphone, laptop/desktop and print), a solid majority, 58%, said their tablet news is adding to the overall amount of news they consume.

In addition, almost a third of respondents, 31%, said they are spending more time getting news now that they have a tablet. That is nearly identical to the 30% who responded that way in 2011. Just 12% say they get less news now.

Similarly, 31% say they are getting news from new sources on their tablet. Again, that is nearly identical to 2011, at 33%.

This year, we also asked people to tell us how much time they spent with news on a typical day 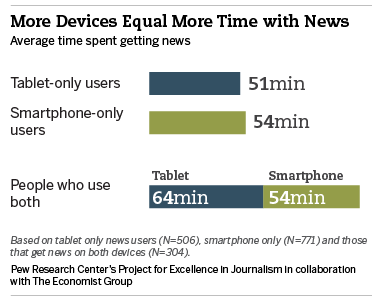 on each device to see how their habits were changing. Asking people to recall time spent on a typical day can be complicated and hard for them to remember.  What we found was that people who get news on multiple devices and platforms reported spending about the same amount of time on each of those platforms as people who just use one. Even if multi-device users are not getting news on all these devices every day, the findings strongly suggested that multi-device users spend more time overall with news.

Even if these recollections are imprecise, the numbers strongly suggest that multiple-device users are spending more total time with digital news.

Next: Revenue
← Prev Page
Page1Page2Page3Page4Page5Page6Page7You are reading page8Page9Page10
Next Page →