Traditionally, the three broadcast networks have not had marked variations in their selection of news. That appears to be changing. In 2011, one network appears to differentiating itself with a more hard news orientation.

CBS, which publicly has announced that it is trying to define itself with a more hard news approach, devoted almost one-third of the airtime studied on its evening newscasts (30%) to two major stories-the economy and Middle East unrest-over the course of the year. That compares with 24% on the ABC’s World News and 23% on The NBC Nightly News. 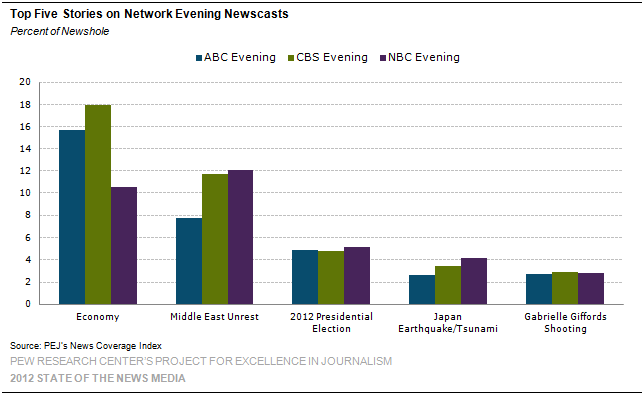 The same basic pattern was also evident in the three networks’ morning news shows. PEJ examines the first 30 minutes of these programs, the period during which producers acknowledge they are most inclined to provide their hard news segments. Again CBS spent more on the economy and Mideast combined (26%) than either NBC (18%) or ABC (16%). 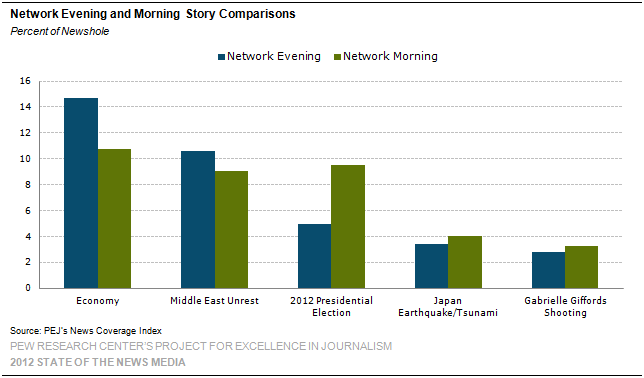 Traditionally, there have been bigger differences in the news agendas of the morning and evening news shows than there have been between the three different networks. Some of those time slot differences remain. The troubled U.S. economy was a significantly bigger story on the network evening newscasts (15%) than on the morning shows (11%). There was also somewhat more attention to the Mideast in the evening (11%) than the morning (9%). The campaign, by contrast, was a bigger story in the morning-twice as big (10%) than it was on the evening broadcasts (5%).

Yet for now, a new pattern appears to be emerging in which the networks, and particularly third place CBS, is appearing to try to brand its newscasts as different than the others in the news they choose to feature.

That new pattern coincides with new management at two of three broadcast news divisions in the last year. At CBS, Jeff Fager, the executive producer of 60 Minutes took the helm as chairman of CBS News with David Rhodes as president while Scott Pelley became anchor in 2011. At ABC, Ben Sherwood took over as news president from David Westin early in 2011.

Next: The PBS Difference
← Prev Page
Page1Page2Page3Page4Page5Page6Page7You are reading page8Page9Page10Page11
Next Page →