Besides looking at just the biggest stories of the year, one advantage of PEJ’s The Year in the News is that it can also categorize all the stories studied during the year by topic to measure the broader agenda-setting influence of the media. What topics got covered and what did not? This probes deeper patterns in news beyond what the biggest breaking news events tended to be.

The jump in coverage of overseas events not directly involving the U.S. (from 11% to 18%) was the biggest change in the year. There was a much smaller increase in attention to international stories that involved the U.S.-10% in 2011 compared with 9% in 2010. 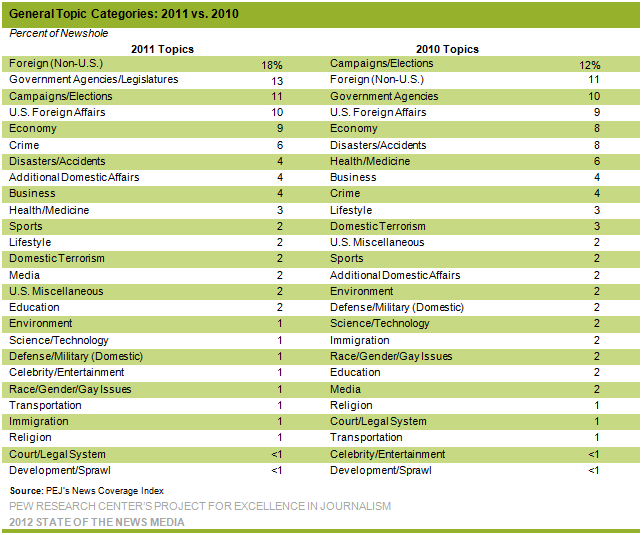 The No. 2 topic category of the year was government itself (other than politics and elections). The workings of government received almost a third more attention than a year earlier (13% vs. 10%). Another topic that received more attention in 2011 was crime, with coverage up 50% (6% from 4%).

The reason that a running news story, such as the faltering economy and the debates over what to do about it, can be the No. 1 story of the year, but not the No. 1 topic is because topic is broader. Many different foreign events can make up the topic of foreign news. Coverage of government, similarly, can encompass a wide range of news events as well, surpassing coverage of the state of the economy when tallied together.

Next: The Year on Blogs and Twitter
← Prev Page
Page1Page2You are reading page3Page4Page5Page6Page7Page8Page9Page10Page11
Next Page →