Barack Obama was the top newsmaker of the year. He was the primary newsmaker (meaning 50% of the story focused on him) in a total of 3,802 stories or 8% of the stories studied-the same percentage as a year earlier. Muammar Gaddafi, the Libyan strongman who was deposed and later killed by rebels, was the second-biggest newsmaker by this measure, the focus of 1% of all stories studied.  Indeed, three of the top 20 newsmakers last year were key Mideast figures who were either deposed or killed-Gaddafi, bin Laden (1%) and former Egyptian president Hosni Mubarak (less than 1%).

Among Republican hopefuls for president, Herman Cain was the most covered candidate in 2011, followed closely by Mitt Romney, Rick Perry and Newt Gingrich, who rounded out the top half dozen newsmakers.

Among elected Republican lawmakers, House Speaker John Boehner was the most covered. Among Democrats other than President Obama, that distinction went to disgraced Congressman Anthony Weiner, who resigned his office after sending suggestive photos of himself to women. 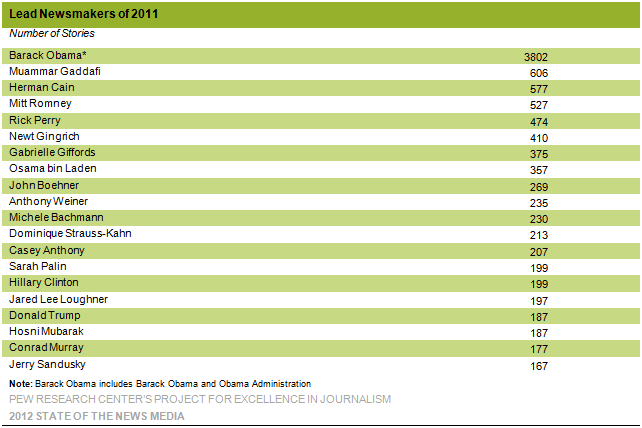 Next: The Cable Difference
← Prev Page
Page1Page2Page3Page4Page5You are reading page6Page7Page8Page9Page10Page11
Next Page →