With different audience bases, different sibling networks and different styles, the three main cable news channels also had different definitions of what constituted news in 2011. Some of the distinctions between the three main channels, in other words, are in story selection, not only style or tone.

The weakening economy, for instance, was a much bigger story on MSNBC (30% of the airtime studied), a sibling of business channel CNBC, than anywhere else. It received the second-most attention on Fox (21%), which also has a sibling channel focused on financial matters, Fox Business. The economy was a much smaller story on CNN (14%). 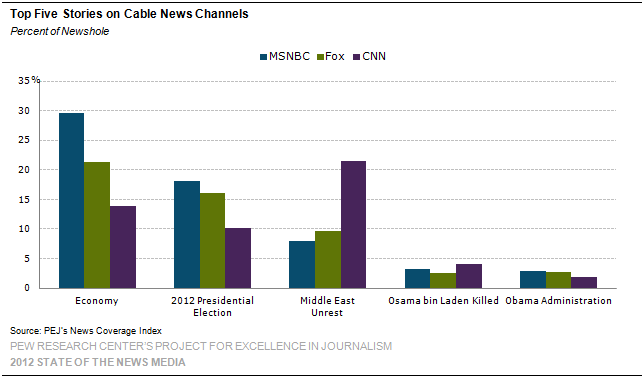 CNN, by contrast, was generally much more international, and it has a sibling international channel. Overall, more than a third of its airtime for the year was devoted to international events and matters that concerned U.S involvement abroad (34%). The percentage was considerably less, 20%, on Fox and even smaller, 14%, on MSNBC. The biggest story of the year on CNN was unrest in the Middle East. It was third on Fox and MSNBC.

The two channels whose evening programming is dominated by ideological talk show hosts, Fox News and MSNBC, were actually more similar in their news agendas generally.

Users can explore these differences in depth in The Year in the News Interactive.