An examination of 2011 coverage also reveals some ways in which the PBS NewsHour differs in its agenda from the rest of the media, particularly in what viewers can find elsewhere on television.

The most striking difference is that the NewsHour offered more than one-third more coverage of international events over the last year than the media overall, including all other forms of television news (cable, morning and network evening). In total, 40% of the time on the NewsHour was devoted to foreign events and U.S. foreign policy, compared with 28% in the media sample generally, 23% on cable news, 24% on the network morning news shows and 24% on the network evening broadcasts. 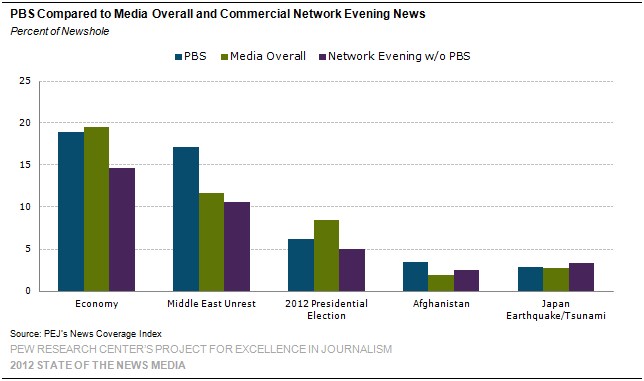 The NewsHour is probably closest as a rival to the network evening news-the programs appear opposite each other and all offer an evening summary of the day’s events. Here the contrasts are even clearer. The NewsHour spent a third more time covering government than the commercial network evening newscasts (12% vs. 9%), more time on the election and politics (7% vs. 5%), much less on crime (2% vs. 6%), less on disasters (4% vs. 9%), and on lifestyle (2% vs. 5%).

Users can explore all of these comparisons for themselves using the Year in the News Interactive, as well as comparing different kinds of radio news, such as NPR vs. Talk Radio or even top of the hour radio headlines.

Next: Interactive
← Prev Page
Page1Page2Page3Page4Page5Page6Page7Page8You are reading page9Page10Page11
Next Page →