This past year was also distinguished by the number of times that key breaking news events thoroughly dominated the news.

Five different times during the year, a news event filled more than half of all the newshole studied in a given week, a rarity in our years of charting news coverage. 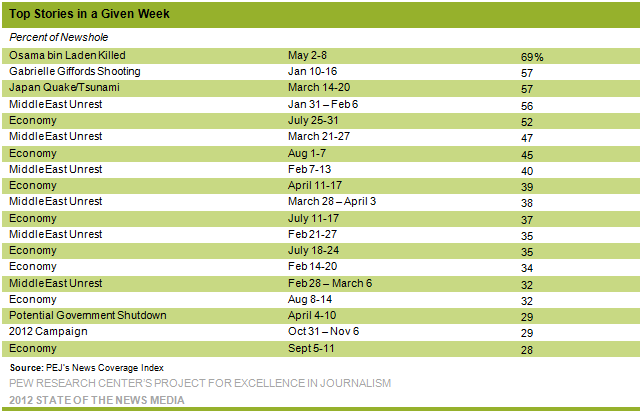 The biggest one-week story of the year was the killing May 1 of Osama bin Laden by Navy Seals. That week, the story filled 69% of the newshole, making it the biggest weekly story PEJ has measured since January 2007. The previous biggest story, (also at about 69%,) was the 2008 presidential campaign from August 25-31, 2008, when Democrats nominated Barack Obama at their Denver convention and John McCain introduced Sarah Palin as his surprise running mate.

But four other subjects also surpassed the 50% mark in a week in 2011-the Tucson shooting spree that wounded Congresswoman Giffords, the Japanese quake and tsunami, Mideast turmoil, and the U.S. economy.

That is the first time since PEJ began studying the news agenda that we have seen more than one story break the threshold of filling a majority of the news in a week. The race for president broke that threshold eight times in 2008. But outside of that election, we have never before seen different stories in the same year of such magnitude. Indeed, other than the 2008 election, there have only been three one-week stories that were so big and they were spread across three different years-the Virginia Tech massacre in 2007, the U.S. economy in 2009 and the midterm elections in 2010.

Next: All News By Topic
← Prev Page
Page1You are reading page2Page3Page4Page5Page6Page7Page8Page9Page10Page11
Next Page →