TWO WHO NEVER GOT OUT OF THE STARTING GATE

There have been two clear losers in the early GOP media primary, former House Speaker Newt Gingrich, who is still in the race, and former Minnesota Governor Tim Pawlenty, who ended his brief campaign on August 14.

Both men had the worst ratios of positive to negative coverage in the GOP field.

Neither man, moreover, had much respite from the critical narrative that dogged them. Gingrich has had just one week out of the 23 studied when the narrative about him was more positive than negative. It was the same story for Pawlenty. Every week he was a candidate, negative coverage about him exceeded positive by at least 14 percentage points.

There was one significant difference in coverage between the two men. Gingrich generated more than twice as much coverage as Pawlenty. Much of that attention occurred in May and June when the press focused on a series of campaign missteps and problems, including the June 9 resignation of top staffers.

Gingrich and Pawlenty were pounded in the blogosphere as well.

Overall, Gingrich registered as the No. 5 newsmaker among Republicans. He was a dominant newsmaker in 6% of all the campaign stories. [1] But much of that came early. Indeed, in May and June, he attracted more attention than any of his GOP rivals, although much of it was unwelcome. 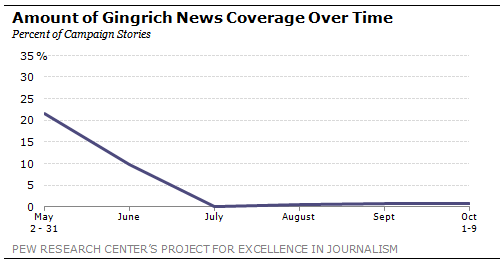 And overwhelmingly that coverage tended to be more negative than positive (in all 15% positive versus 35% negative and 50% neutral).

Almost immediately after his entry into the race on May 11, Gingrich made news he probably regretted with one of his trademark controversial comments-angering conservatives by criticizing Wisconsin Republican Paul Ryan’s proposed Medicare overhaul as "right-wing social engineering." And his biggest week of coverage occurred after the mass staff desertions on June 9, an event that followed what many saw as an ill-timed vacation by the candidate.

After June, his coverage virtually vanished. From July on, he generated less coverage than any other Republican. 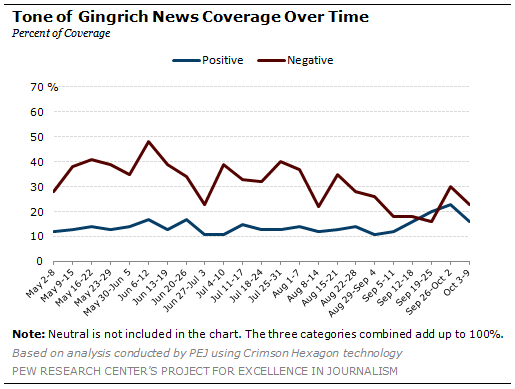 When candidates have problems that play into pre-existing negative perceptions in the media, the result can be challenging. A well-known public figure, Newt Gingrich entered the race with a reputation for having a nimble mind, but perhaps not the requisite discipline needed to run an effective campaign.

On May 15, only four days after entering the race, Gingrich reinforced that notion by launching the attack on Paul Ryan, who is widely respected by many conservatives.

Media reaction was swift and largely negative, with a Kansas City Star columnist calling it an "astonishing political pratfall" in a piece headlined: "The amazing political suicide of Newt Gingrich." 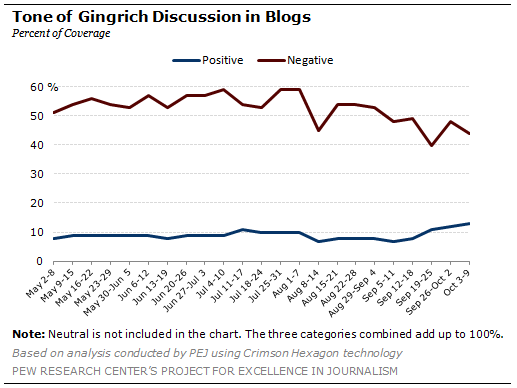 Less than a month later, there was the near fatal blow of the June 9 staff walkout. "Newt Gingrich is nonetheless vowing to remain in the race for president," the AP reported. "But whether the former House Speaker remains a viable candidate is now in serious doubt."

Gingrich never really recovered from those early blows in the media narrative and the only week of positive coverage (20% to 16% negative) did not occur until September 19-25, the week of the Florida debate.

Gingrich fared even worse in the blogosphere. In terms of generating attention on blogs, he ranked No. 6, (with about 58,000 assertions). And negative discussion about him outstripped positive by 6-1 (9% positive, 53% negative and 38% neutral). 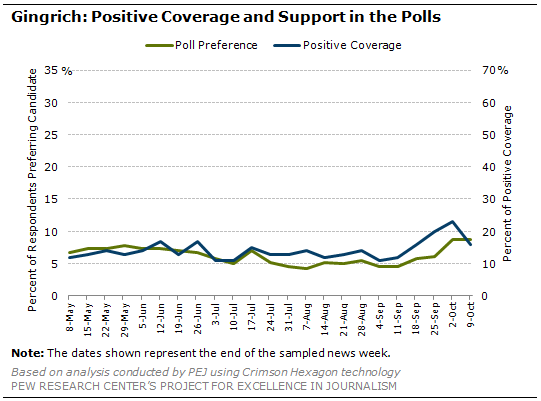 Gingrich’s campaign problems clearly helped fashion a negative narrative in the news media, but those missteps were magnified by bloggers, who not only repeated those events but offered their opinions on them as well.

In the immediate aftermath of Gingrich’s June 9 staff defections, for instance, "the zxbe collection" blog published the candidate’s statement that, "There is a fundamental strategic difference between the traditional consulting community and the kind of campaign I want to run," before adding this sarcastic response:

"Is that difference that they wanted to run a campaign to win it, as opposed to doing everything possible to lose it?"

He registered as the No. 6 Republican newsmaker during the course of his campaign, which lasted about three months. In May, the month he declared his candidacy, he finished as fourth-leading newsmaker.[1] 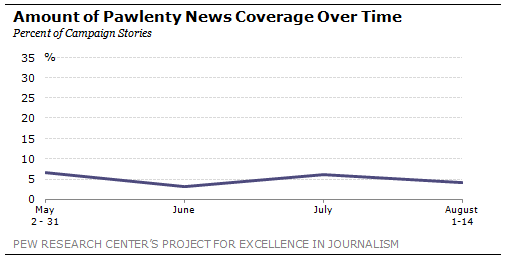 But Pawlenty’s campaign never did better than that. Even in leaving the race after a disappointing third-place showing in the Ames straw poll, Pawlenty had trouble attracting press attention, overwhelmed by the news of Perry’s entrance.

In terms of tone, Pawlenty hardly did better. Overall, 12% of the coverage of him was positive, 30% negative and 58% neutral. (This study examined the tone of Pawlenty’s coverage from May 1 through August 14, the day that he dropped out of the race.) 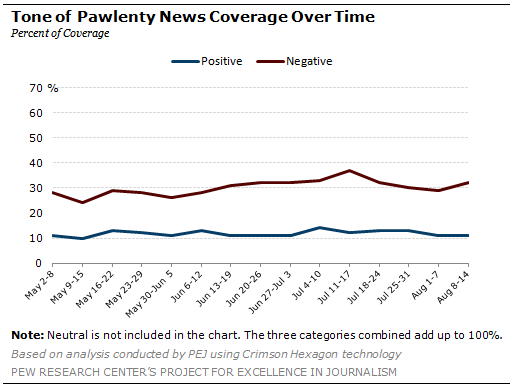 One of Pawlenty’s worst weeks of coverage (11% positive, 31% negative) followed the June 13 CNN debate where many pundits deemed him to have been too unaggressive, particularly when he failed to follow up his earlier attacks on the health care program Romney instituted as Massachusetts governor.

Typical of the response was this analysis from the liberal online publication Salon, which declared that Pawlenty “struggled to gain traction [and] showed why on Monday, when the moderator—CNN’s John King—dared Pawlenty to attack ‘RomneyCare’ to Romney’s face [and] Pawlenty stumbled around before dodging the challenge and filibustering.”

And when he exited the race after a disappointing showing in the Ames straw poll, the obituaries were pretty simple and to the point. An August 14 Reuters story said, “Pawlenty touted a record of balancing the budget, cutting spending and down-sizing government in Minnesota, but his ‘nice guy’ image failed to gain traction….”

Pawlenty didn’t generate all that much attention on blogs either, generating about 33,000 assertions, which put him No. 6 among the 10 Republicans during his shortened campaign. He also found the blogosphere acting as a megaphone to amplify the issues about his viability that arose in the news media. Overall 11% of the opinions studied about him on blogs were positive, 40% negative and 50% neutral. 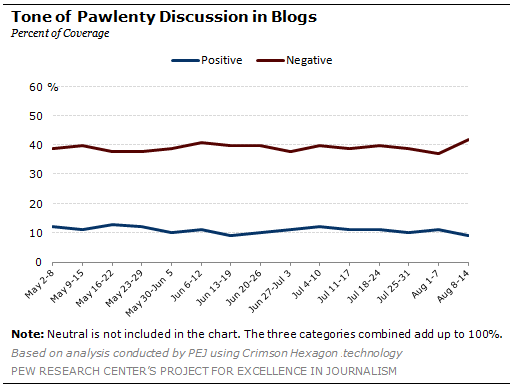 Many traditional reporters commented on his reluctance to attack Romney in the June 13 CNN debate.  But under a post bluntly headlined, “TPaw Chokes,” the Library Grape blog went considerably further in essentially writing Pawlenty’s political epitaph.

“This sort of [debate] format requires some level of flexibility with dissemination of talking points. Pawlenty has none,” the blog asserted. “It looks as though he’s afraid to hit Romney when he’s in the room…Pawlenty simply isn’t a top tier candidate.”