Taken overall, businessman Herman Cain’s campaign narrative in the news media does not reflect his current standing in the polls. From May to October, Cain was the No. 7 newsmaker among Republicans, finishing ahead of only Santorum, Paul and Huntsman. And the tone of that coverage was moderately more positive than negative. 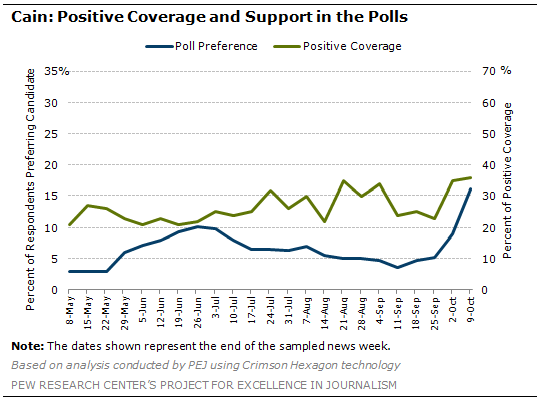 But starting in August, the tone of his coverage began to improve noticeably, beginning a stretch of nine out of 10 weeks of positive coverage. And in September, he generated more news coverage than he had the previous four months combined.

Put simply, the research indicates that Cain is on a roll, a man who seems to have surprised the media with his strength in the race and whose narrative changed markedly for the better before he began to rise in the polls.

If he enters the primaries as a second major contender alongside Romney, he will share another characteristic with the former governor of Massachusetts. They were the only Republicans whose treatment in the blogosphere matched the tone of their narrative in the news media. And along with Paul and Romney, he was one of three candidates to have an overall positive tone to the conversation about him in blogs.

In the race for exposure, Herman Cain was a dominant newsmaker in 3% of the campaign stories studied, thanks to a significant jump of coverage in September when he won a straw poll in Florida and his campaign picked up momentum in public surveys.[1] 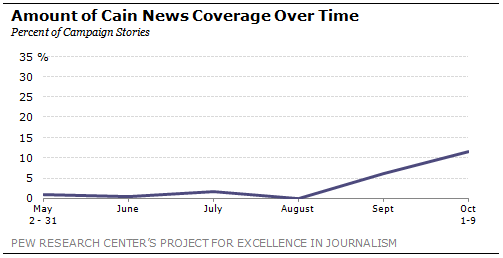 Cain was virtually ignored by the media from May through August, generating less coverage than any other candidate in those four months—including Ron Paul.

But that changed dramatically in September, when he registered as the No. 4 newsmaker and a dominant newsmaker in 6% of the coverage—behind only Perry, Romney and Bachmann. Then, in early October, he generated more coverage than anyone other than Perry.

The tone of Cain’s coverage told a tale of two campaigns.

In the first 13 weeks studied (May 2-July 31), his narrative was negative in 11 of those weeks. But from August on, his coverage was more positive than negative in every week but one, and often by substantial margins.

What happened to turn it around?

Certainly one major event was the September 24 Florida straw poll victory. “In one of the more stunning upsets in recent political history, Herman Cain won the straw poll, swamping favorites Rick Perry and Mitt Romney in a blowout of breathtaking proportions,” declared the News-Press in Fort Myers. 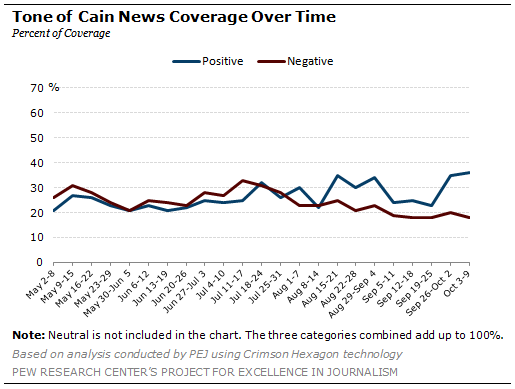 But Cain’s ascent in the media narrative began weeks earlier. The more positive turn coincided with the August 13 Ames straw poll, the entrance of Perry in the race, and the decline of Bachmann in polls and coverage.

Cain’s fifth-place finish in Ames did not exactly have the media anointing him as one of straw poll success stories. But he helped shape his narrative by pronouncing himself satisfied with the results and forging ahead. And his message seemed to resonate on the campaign trail, where his energetic campaign won praise.

An August 22 story in the Las Vegas Review-Journal reported on his early organizing efforts for the Nevada caucuses. “David Damore, a political science professor at the University of Nevada, Las Vegas, said Cain’s strategy is smart,” the story noted. “He said the former CEO of Godfather’s Pizza could surprise Romney, U.S. Rep. Ron Paul, R-Texas, and other candidates who haven’t laid early groundwork.”

But it was the Florida straw poll that altered the way political insiders viewed him. The day after his Florida triumph, a piece on the conservative Town Hall site offered a political reassessment of the pizza magnate.  “I am no longer dismissive of the idea of President Cain,” the writer declared.

And the week following the straw poll, Cain had his best week in the media yet, with 35% of his news coverage being positive, versus 20% negative (and 45% neutral or straight factual reporting). He followed that even with even better numbers from October 3-9 (with positive doubling his negative 36% vs. 18%).

One question is whether Cain can sustain his rise or whether his trajectory in time will look like Bachmann’s. For now, he has not seen the kind of vetting that Bachmann did which led to a change in tone. But unlike Bachmann, who suffered when Perry joined the race, the field now appears set. And Cain’s improved coverage is already two months old.

Quantity and Tone of Cain in Blogs

Cain wasn’t among the most talked-about Republicans in the blogosphere—he ranked No. 7 in terms of generating attention (almost 52,000 assertions tracked). But he played much better among bloggers than many of his competitors. Overall, 28% of the assertions about him studied on blogs were positive, 24% negative and 49% were neutral—virtually the same numbers he had in the news media. In the ratio of positive opinion versus negative opinion of him measured among bloggers, only Ron Paul did better. 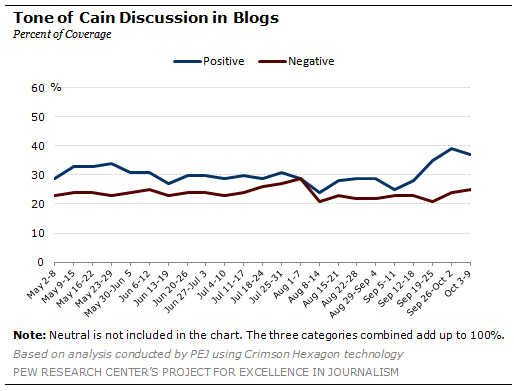 People appeared to come down firmly on one side or the other about the former CEO of Godfather’s Pizza.

One post on the Conservative Blogs Central site lauded his clear stands on the issues. “He seemingly came out of nowhere and not many really gave him a snowballs chance of getting anywhere… But the unmistakable and undeniable fact of the matter is, everything he has said makes perfect sense, and the people of America are listening to him.”

Liberal bloggers saw him very differently. After Cain’s expressed his support for a community’s right to ban mosques, StreetWisePundit responded: “If you support Herman Cain, you are a Theo-con and no amount of tea, nor red white and blue shirts, nor slogans about how you love the Constitution will ever be able to cover over your hypocrisy.”