To a large degree, Mitt Romney’s coverage in the news media reflected a simple narrative: He does not inspire tremendous passion or excitement with Republican voters but he has always been considered viable. That narrative has been sizable in quantity, consistent over time, and evenly divided.

Overall, Romney was the second most-covered candidate. And the tone of that coverage in the news media was decidedly mixed.

That divided quality might contradict the idea that the mainstream media are inclined to favor a more traditional or establishment candidates considered to be moderate. Only Newt Gingrich and former candidate Tim Pawlenty, two men who faced an unrelenting barrage of bad press, had a higher percentage of negative coverage than Romney overall. And in16 of the 23 weeks studied, his coverage was either split or with a margin between positive and negative coverage of no more than three percentage points.

That tone was mirrored in the discussion about Romney in the political blogosphere.

In the race for exposure, Romney trailed only Perry. Overall, he was a primary newsmaker in 13% of all the stories about the campaign in that period. [1]

With the exception of June, when he was the top newsmaker, there always seemed to be candidates getting more attention. In May, he was overshadowed by coverage of Newt Gingrich and to a lesser degree, Sarah Palin. In July, Bachmann was a bigger media draw. In August Perry generated about three times as much coverage. In September, Perry still enjoyed a roughly 2-1 margin. 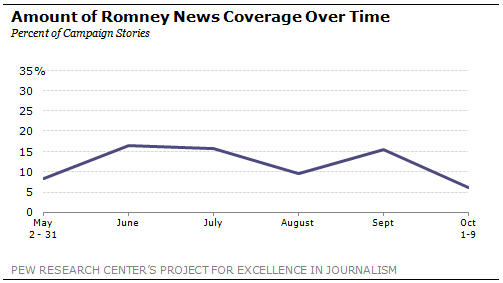 Romney did have some big weeks of attention, most notably from May 30-June 5 when he announced his candidacy. Even his announcement failed to completely win him the news agenda, however. The same day he announced he was running at a New Hampshire farmhouse, he had to share the spotlight with Palin, whose highly-publicized bus tour happened to take her to the Granite State as well.

Overall, the tone of Romney’s coverage in the news media was 26% positive, 27% negative and 47% neutral—a split that stands in contrast to most of the candidates studied.

Romney’s toughest stretch of coverage in the news media occurred from early May into mid June when he had six straight negative weeks. To a large degree this early negative period reflected the media exploring the presumption, which he has not shaken, that he was a candidate who had ideological problems with the GOP’s conservative base.

Romney’s “basic political problem is that he comes from the Northeastern wing of the party,” declared the influential conservative magazine, the Weekly Standard, on May 13.

When Romney broke with most of his GOP rivals by saying he was convinced that global warming was real and that human activity contributed to it, Politico declared that, “conservatives trying to digest Romney’s evolving views on climate change are not very pleased with what they’ve heard over the years.” 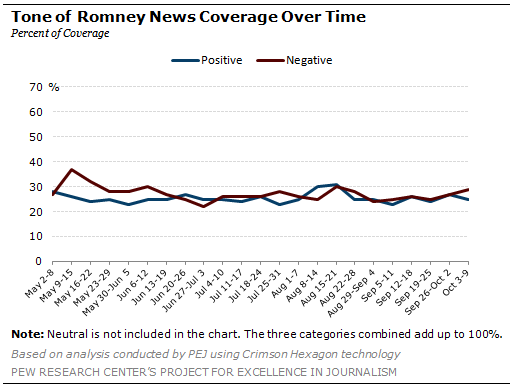 The tone of Romney’s coverage began to improve a week after his poll numbers climbed and in the wake of a widely lauded showing in the June 13 CNN debate. The week of June 20, Romney saw the first week of press coverage that was more positive than negative, though it was still closely divided (27% positive vs. 25% negative).

Romney also generated positive attention in the press because of his ability to raise money. On July 16, for example, an Associated Press story reported that he “leads all Republicans in the contest for campaign cash, cementing his front-runner status among contenders hoping to take on President Barack Obama in 2012.”

But when Perry entered the race in August and shot ahead of Romney in the polls, some of the horserace narrative that had helped him earlier now turned on the ex-Massachusetts governor. Yet even with the quick Perry start, the media perception that Romney would remain a formidable Republican contender and that he might be the GOP hopeful most likely to defeat Obama, continued to generate some positive coverage.

When Perry slipped during the September 22 Fox News debate, triggering an increase in the Texas governor’s negative coverage, Romney did not benefit much in the media narrative. Instead his coverage remained mixed. From September 19 through October 9, his positive coverage ranged between 24% and 27% while his negative ranged between 25% and 29%. While many pundits now foresee a clearer path to the nomination for Romney, the divided narrative that he began his candidacy with persists.

Quantity and Tone of Romney in Blogs

For those who think of social media as a hotbed of ideological passion, Romney might have seemed a candidate who might suffer there. Yet the data suggest something else. The former Massachusetts governor generated plenty of interest from bloggers, ranking as the second-leading Republican in terms of attention, with about 123,000 opinions tracked.

But the tone of the discussion of Romney in the political blogosphere was as divided as it was in the news coverage. Over the course of the five months examined, 34% of the opinions expressed about him in blogs were positive, 33% were negative and 32% were neutral or a recitation of straightforward facts. 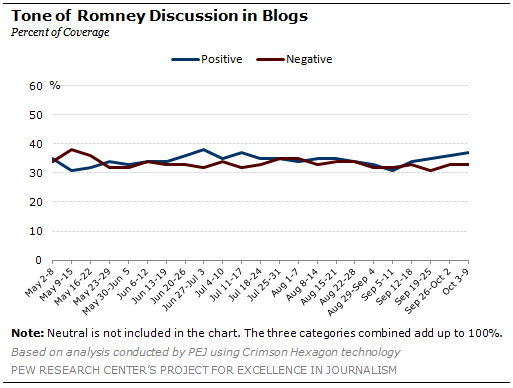 If the basis of his positive treatment in the news media was Romney’s perceived political viability, those numbers suggest that at least some bloggers are concerned with the same thing.

Romney scored points among bloggers for being a more mainstream candidate than some of his rivals. “He is the best choice for the GOP,” stated a June 2 post on the Independent Internationalist blog.  “Sarah Palin, Michele Bachmann, Ron Paul, Herman Cain, and Rick Santorum are all sideshow candidates. Romney has the quality of being the adult in the room.”

And much of the unflattering commentary about Romney in the blogosphere has homed in on an issue that his political opponents often raise—whether he changes positions for political expediency. This July 5 posting on the Fired Up! blog ran under the headline, “Mitt Romney and his summer flip flops.”