Even with his poll numbers beginning to drop in mid-September and his campaign losing momentum, Texas Governor Rick Perry stands as the candidate who fared best in the early Media Primary. He emerged as the dominant newsmaker as soon as he entered the race. And the margin by which his positive coverage exceeded his negative coverage was higher than for any GOP candidate studied. He also had only one week in which his coverage was more negative than positive.

That favorable media attention began well before he joined the race, moreover, and it continued after he began to lose altitude in the polls.

There was also a major difference between how Perry fared in news coverage and on blogs. In the blogosphere, the tone of the conversation about him was almost twice as negative as positive.

Once Perry made his intentions known on August 13, no other Republican hopeful matched his ability to generate coverage. Even after receiving minimal press attention in May, June and July, the coverage he generated after he entered was so heavy that he was the leading newsmaker among Republicans for the five months covered by the study.

To measure quantity of exposure, researchers had two metrics. The first was to measure the number of stories in which a candidate was mentioned at least 50% of the time, a metric we call lead or primary newsmaker. Over the five months, Perry was the primary newsmaker in 17% of campaign stories examined. From July on, researchers also began to code a broader measure of exposure as well—whether a candidate was mentioned in 25% percent of a story. Perry was the top newsmaker by either measure. [1]

In August, Perry was a primary newsmaker in roughly three times as many stories as his closest GOP rival, Mitt Romney. And in September, he generated more than twice as much attention as the No. 2 newsmaker, again Romney. 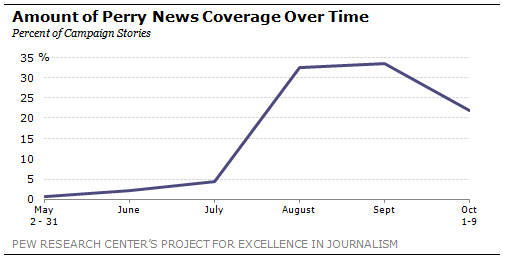 One factor in Perry’s knack for making news was his strong rhetoric. On August 15, two days after entering the race, he created a furor by bluntly warning that if Federal Reserve Chairman Ben Bernanke guy “prints more money between now and the election,” that would be “treasonous in my opinion.” That week, Perry dominated campaign news. The next week, after he jumped into the lead in several GOP presidential primary polls, Perry was the dominant newsmaker in close to half of all the campaign stories.

From that point on, he was at center stage in the campaign narrative. He ended up being a primary newsmaker in 33% of all the campaign stories in August and 34% in September.

While much of the coverage was fueled by his poll numbers, a series of controversial statements—ranging from his characterization of Social Security as a “Ponzi Scheme” to accusing his GOP rivals of failing to have a “heart” on immigration policy—also kept him in the headlines.

From May through early October, 32% of the news coverage of Perry was positive, 20% was negative and 49% was neutral or straight factual reporting, according to the analysis conducted by PEJ using the computer technology developed by Crimson Hexagon.

In some ways, Perry was the candidate the press was waiting for.

He began to emerge as a possible candidate the week of May 23, when he said he would consider running. Yet in every one of the 12 weeks between when Perry hinted at a run and when he actually joined the race, on August 13, he enjoyed more positive coverage than negative in the news media. Indeed, in all but one of those 12 weeks that positive-to-negative gap exceeded nine points. 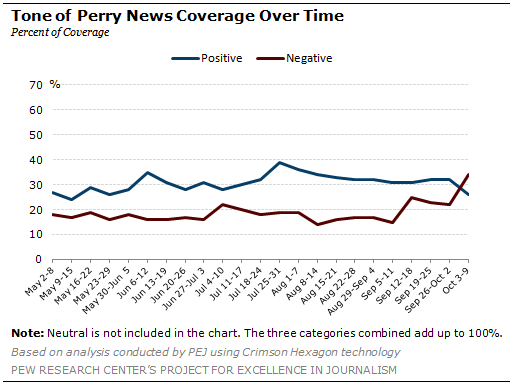 One trigger for the storyline that the Texas Governor would be a welcome entrant was the early problems afflicting Newt Gingrich’s campaign. After the former House Speaker lost many of his top campaign aides, a June 10 Reuters story concluded that given “a lackluster Republican field that has not inspired activists hungry for an exciting outsider candidate,”  there is  “a major opening for perhaps the last person who could shake the very foundations of the presidential contest, Texas Gov. Rick Perry.”

And the drumbeat kept getting louder. In one of Perry’s best weeks of coverage—July 25-31 when his narrative was 39% positive and19% negative—the smart money was already shifting to the candidate-in-waiting.

“At the betting market Intrade, Texas Gov. Rick Perry has overtaken Mitt Romney and is now considered the most likely person to win the Republican presidential contest,” wrote the New York Times’ Nate Silver on July 26.

Even in the week of the Ames Iowa straw poll, which did not include Perry, he was a presence in the narrative. “While Perry continued to reap attention with his lengthy political tease, rivals were left to sweat in the Iowa sun, shaded only by his long shadow,” The Dallas Morning News wrote August 11.

Once Perry was in, the press focused explicitly on his impact on the polls. The last week in August, when a Gallup Poll had him vaulting to a 12-point lead over Romney, the August 24 headline on The Daily Beast, was one of hundreds: “Perry Takes Lead Nationwide.”

Fairly quickly, some in the press raised questions about Perry’s ideas and record—including some stories that bluntly raised the issue of his intellectual heft. “Is Rick Perry Dumb?” Politico headlined a story on August 29.

But questions about Perry’s readiness for the presidency did not become magnified enough in the media to be measurable across the broad swath of news coverage and commentary studied here until the week of September 12-18—the first time since he entered the race that a quarter of the coverage about him was negative.

That pattern continued the next week, when during a September 22 debate in Florida, he was deemed to have made several stumbles. The next day, the Washington Post asserted that Perry’s debate performance “did little to put to rest the idea that he’s not quite ready for primetime. Or at least, primetime debates.” At the same time, Perry came under attack for being insufficiently conservative on issues ranging from his program to provide schooling to the children of illegal immigrants and his mandating HPV vaccinations for young girls in Texas.

The polling averages compiled on the Real Clear Politics site show that the numbers for Perry began to drop on September 13, the same week his coverage began to be less positive.

Even then, however, Perry enjoyed more positive than negative coverage the last three weeks in September and the first few days of October. It was just not quite as positive as before. And he was still leading all other GOP contenders in the polls until the first week of October. Perry did not have a week in which his news coverage, across the broad spectrum of outlets was overall more negative than positive until the week of Oct. 3-9, when 26% of his coverage was positive, versus 34% that was negative.

Quantity and Tone of Perry in Blogs

If the news media largely treated Perry as an instant frontrunner enlivening a lackluster field, bloggers had a different view of him. While he was the leading newsmaker among Republicans in the news media, for instance, he only ranked No. 4 among the most-discussed candidates in the blogosphere. (Over the course of those five months, the data found about 100,000 opinions asserted in blogs about Perry. By comparison, Palin was the most talked about candidate in the blogosphere with about 137,000 opinions offered).

Those opinions among bloggers, moreover, tended toward the negative. Only 21% of the conversation about Perry tracked by the software was positive and 40% was negative, while 39% were mainly factual or neutral. That ratio is a little better than Michele Bachmann and Sarah Palin, but markedly more negative than Mitt Romney, Herman Cain and Ron Paul. 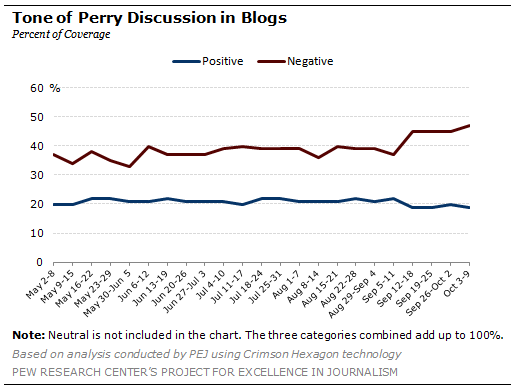 A good deal of the criticism of Perry among bloggers focused on his ideology and philosophy. A post on the Secular News Daily site went after his role in organizing a major August 6 prayer event in Houston. “Why Texas Gov. Rick Perry and his prayerfest doesn’t understand America: It doesn’t matter whether someone is Christian, Muslim, Jewish or subscribes to no faith at all; we are all a part of this country.”

Some of the criticism was just people airing their views and offering their distaste for Perry, not necessarily making a specific argument. A few days after his entry into the race, for instance, someone posted a picture of an anti-Perry bumper sticker affixed to a car in Texas on theLivereal.org blog with the comment: “Proof that there are some sane people in Texas.”

Some of the praise of Perry in the blogosphere stemmed from the same factors that drove his upbeat narrative in the news media—a swift rise to the top of the pack.

“Rick Perry has only been in the Republican race for president for less than two weeks, and he is already the frontrunner—by a lot,” declared the Opposing Views blog on August 24. “The latest Gallup poll released on Wednesday shows Perry with 29% of the vote, crushing the former perceived frontrunner Mitt Romney by 12 percentage points.”

1. PEJ describes a candidate who is mentioned in at least 25% of a story as having a “significant presence” in that story. From July through mid October, Perry was a “significant” newsmaker in 41% of campaign stories, making him the No. 1 newsmaker by that metric.