Each of these men generated relatively little news coverage between May and October, ranking No. 7 and 9 respectively among Republicans in that category. And the tone of each of their narratives was mixed, with positive coverage essentially balancing out negative coverage.

Indeed, their coverage patterns seemed to reflect the same fundamental dynamic. The media considered them longshot candidates to win the GOP nomination, partly based on poll results, and consequently they received considerably less coverage than such figures as Perry, Romney, Bachmann and even Palin.

In terms of tone, their coverage resembled the mixed quality of Mitt Romney, though there was much less of it. Still, they have fared considerably better than Newt Gingrich and Tim Pawlenty.

Both Huntsman and Santorum did poorly in the blogosphere, however. The conversation on blogs ran 2-1 negative against Huntsman and was even more unflattering, 5-1 negative over positive, for Santorum.

Huntsman was a primary newsmaker in 3% of all the campaign stories studied in the five months included in this report.[1]  And about three-quarters of that coverage came in June, the month he made his candidacy official. The week of that announcement (June 20-26), he was the top campaign newsmaker among Republicans. But without showing any significant growth in the polls, he was unable to sustain coverage in the summer months. 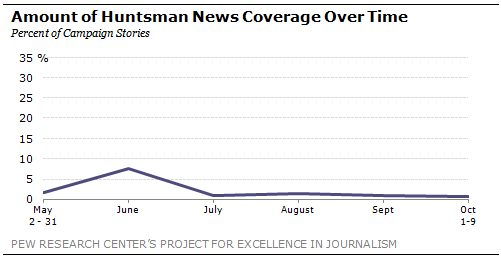 When it came to tone, Huntsman had a slightly higher amount of positive coverage (21%) than negative (17%) with a large neutral component (63%). And that narrative was very consistent. His coverage was positive in the 20 of the 23 weeks studied.

Huntsman’s challenge in the media was to overcome the perception that as an ideological moderate who was Barack Obama’s former ambassador to China, he was running a quixotic campaign.

One of Huntsman’s worst weeks was May 23-29 (positive 19% and negative 31%) when he found himself fending off doubts about his candidacy during a campaign swing through New Hampshire. "Aside from Utah, who are you?" asked one voter quoted in an AP story that described Huntsman as the "little known former Utah governor." 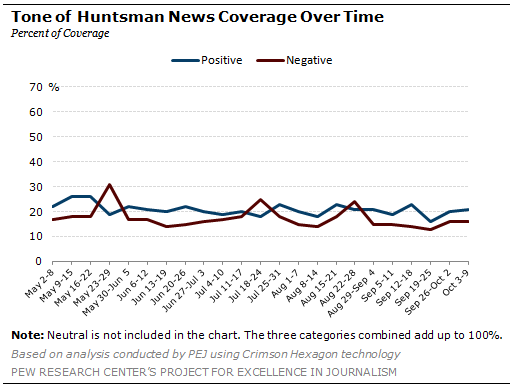 Huntsman generated some positive responses in the media narrative for his ideas. In early September, one columnist lauded him as the first Republican to "unveil a detailed jobs plan," even while noting that "he is polling in low single digits among primary voters."

Perhaps emblematic of those problems with GOP primary voters is the fact that the Huntsman admirer and author of the column was a deputy field advisor for Obama in 2008.

If the treatment in the news coverage of Huntsman was polite but insubstantial, the narrative in the political blogosphere was far less friendly and even more insubstantial. Huntsman finished dead last among Republicans when it came to the quantity of attention on blogs, generating only about 31,000 assertions, less than one-quarter of Palin’s total.

Although much of the discussion was neutral (55%), when bloggers offered opinions they were negative by a ratio of 2-to-1 (15% positive and 30% negative). That put him in the same rough neighborhood as Perry, Palin and Bachmann.

Some of that disapproval in the blogosphere, as might be expected, came from conservatives critical of his reputation for moderation, both in style and substance. 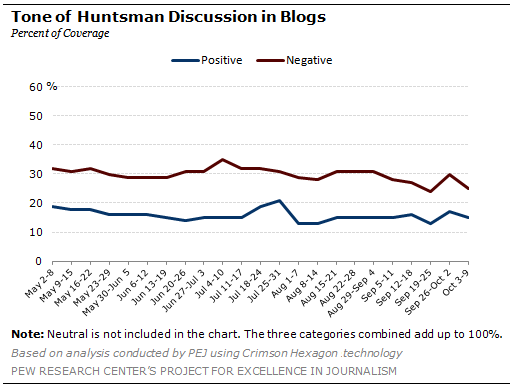 "If you want a wishy-washy candidate who is going to be soft on the issues, then yeah, Huntsman is probably your guy, but I don’t think he has much shot in getting the nomination," wrote a blogger on Carolina Politics Online July 11. "Republican primary voters [are] looking for someone who is going to fearlessly act to slash government intrusion and spending to the extreme and Huntsman is just not that guy." 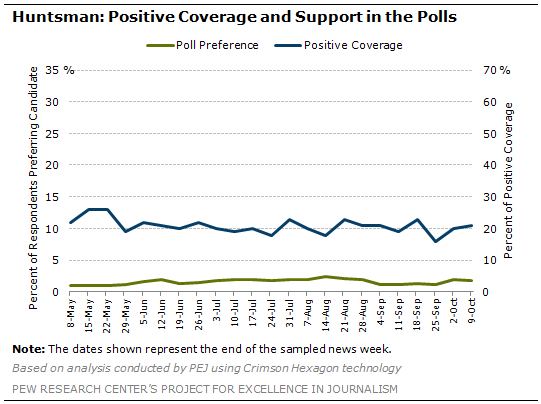 Santorum was a prominent newsmaker in only 2% of all the campaign stories from May 2 through October 9. The arc of that coverage followed the same pattern as for Huntsman. He generated some press attention in the spring-May and June-but failed to stay in the headlines as his campaign showed little traction in the polls. 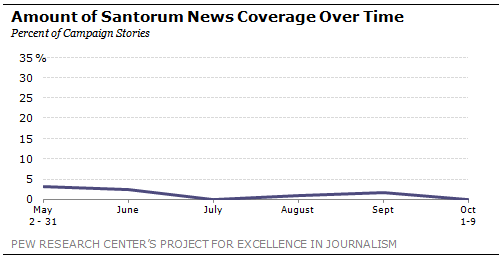 The overall tone of Santorum’s coverage was almost evenly split between positive (23%) and negative (26%), with the majority (51%) being neutral. But that average is influenced by the fact that his most positive week, when he entered the race in early June, was also the week of his heaviest coverage. Over the length of time, and in 21 of the 23 weeks studied, his coverage was mixed or more negative than positive. 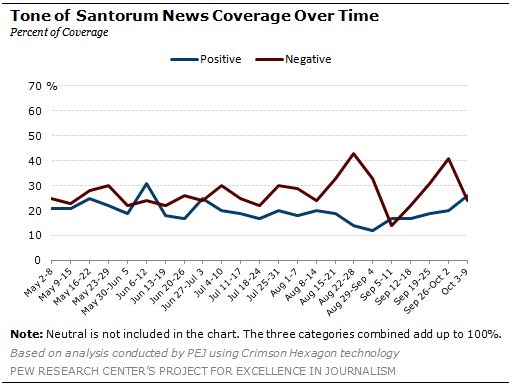 Some of the coverage the week Santorum did enter the race suggested his staunch conservatism on cultural issues would play well with GOP voters. A June 6 New York Times story stated that the "social issues are the ones that fire up the segment of the Republican primary base to which Mr. Santorum most appeals."

Yet, very little of Santorum’s coverage indicated that he would find a path to the Republican nomination. And the poll numbers were very discouraging.

On August 30, NBC, reporting on a CNN-Opinion Research Poll that had Santorum and Huntsman both at 1%, stated that neither man "has been able to break through despite full-fledged, on-the-ground campaigning."

A few weeks later, a New Republic story that examined 50 hours of Fox News Channel coverage to see which Republicans were being taken the most seriously, offered this telling observation about both Gingrich and Santorum: "each [was] granted a single, respectful, prime-time interview and were otherwise mercifully left on the cutting-room floor."

And the blogosphere was even harder on Santorum. First off, he received only minimal attention-finishing behind every Republican besides Huntsman in the number of assertions (about 35,000). 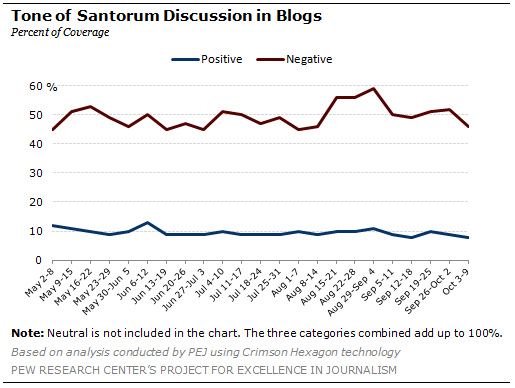 And with the exception of Newt Gingrich, no one was treated more harshly by bloggers. Of the conversation in the blogs about his candidacy from May through October, 10% was positive while 50% was negative. Another 40% of the conversation was neutral.

And while some of that criticism came from ideological foes, even those bloggers more inclined to share Santorum’s philosophy acknowledged that he had never really gotten lift-off in the campaign. After his fourth-place finish in the Ames straw poll, the Pirate’s Cove blog sounded the death knell.

"Rick Santorum – put a fork in him, he’s done. He’s a great guy with great ideas, but, just too dull to catch fire." 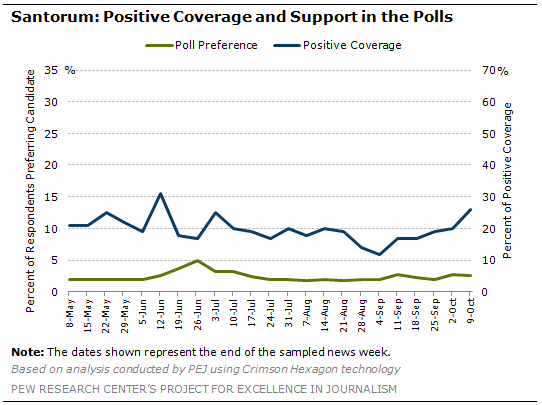