While Barack Obama may not have been formally campaigning for re-election, he was by far the leading newsmaker in the past five months. And the coverage of him during that period has been unrelentingly negative, worse than any of his potential Republican foes. He fared better, but only slightly, in the blogosphere.

Several factors were likely responsible for that critical tone. In many stories, Obama was the target of not only the whole roster of GOP presidential contenders. He was also being criticized in often harsh terms by Republicans in Congress. Added to that, members of his own party began criticizing him on both policy and strategy grounds, particularly as his poll numbers fell. And for much of this period, the president’s coverage reflected the biggest problem on his watch-a continual flow of bad news about the U.S. economy.

From May to October, Obama generated about six times more coverage than the leading Republican newsmaker.

He was the top newsmaker in 16 of the 23 weeks examined in this study and he never registered lower than the second leading newsmaker in any of those weeks-and this is compared to all people in the news, not just other contenders for his job.

Much of the coverage of Obama stemmed from his role as the central figure in the biggest story over those months-the economy. From May 2 through Oct. 9, the economy filled one-fifth (21%) of the newshole studied by PEJ, compared with 9% for the 2012 presidential campaign. And nearly half (46%) of the stories in which Obama was the primary newsmaker in that period were directly related to the economy.

His coverage built steadily through the summer, accelerating in July, when the media turned its focus to the bruising partisan debt ceiling negotiations. It reached its high point in September, when the president unveiled his $447 billion economic package, which triggered another Beltway battle. 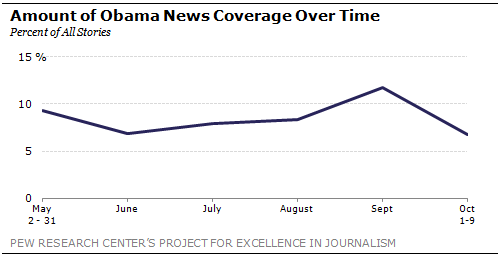 And while he may have been unable to positively influence the tone of his coverage, Obama’s actions directly affected the level of coverage. Three of his biggest weeks of media attention during these five months occurred when he embarked on his mid-August jobs tour, when he delivered his September 8 speech on job creation and when he offered a September 19 deficit reduction proposal that included raising taxes on the wealthy.

Several things are striking about the tone of Obama’s coverage during these months. Using the computer assisted analysis, only 9% of the coverage about Obama was positive while 34% was negative. The majority of the coverage (57%) was neutral or primarily factual in nature. Even the two Republican candidates with the most unflattering narrative-Pawlenty and Gingrich-had more positive treatment at 12% and 15% positive respectively.

Overall, Obama’s ratio of negative to positive coverage was nearly 4-1.

What also stands out is how static the coverage was. In the 23 weeks studied, his positive coverage ranged only between 8% and 10%.

Not only did the president’s positive coverage in any given week never exceed 10%, but it also only reached 10% in four weeks during those five months.

There were a number of forces that fueled Obama’s difficult media narrative and no event or dynamic changed the tone of the president’s coverage, not even briefly.

Even the week of May 2-8, immediately after the raid that killed Osama bin Laden, Obama’s coverage was overwhelmingly negative. One reason is that many of the references to his role in the hunt for bin Laden were matched by skepticism that he would receive any long term political benefit from it. Another was that the bin Laden news was tempered with news about the nation’s economy. 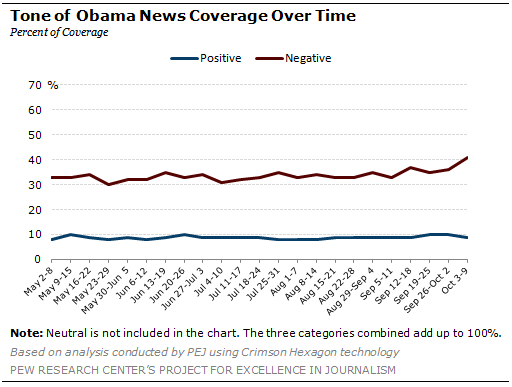 "A nation surly over rising gas prices, stubbornly high unemployment and nasty partisan politics poured into the streets to wildly cheer President Barack Obama’s announcement that Osama bin Laden, the world’s most wanted man, had been killed by U.S. forces after a decade-long manhunt," stated a May 2 AP story. "The outcome could not have come at a better time for Obama, sagging in the polls as he embarks on his re-election campaign."

The president’s coverage was often marked by combination of bad economic news and potential opponents eager to seize on that storyline. A CBS scene-setting story about the June 13 CNN debate was an example. "On the eve of the second Republican presidential debate of the season, President Barack Obama continues to see his poll numbers on the economy slipping, and those Republicans who want to be president are on the attack this weekend."

The economy remained a theme that hurt Obama throughout the summer, even when he tried to change the narrative. As he began his August bus tour about jobs, an Associated Press story declared: "President Barack Obama launches a political counteroffensive this week, weighed down by a stunted economy, wilting support among some of his most ardent backers, and a daily bashing from the slew of Republicans campaigning for his job."

Quantity and Tone of Obama in Blogs

Obama did fare a little better among bloggers, but not much. In all, 14% of the conversation about him was positive and 36% was negative during these 23 weeks, while 50% was neutral.

As was the case with news coverage, Barack Obama was far and away the top newsmaker on blogs, generating almost 1.3 million assertions in the five months studied, almost 10 times the amount of any of the Republicans. And the tone was only slightly better than his news coverage.

Much of the criticism aimed at Obama by bloggers centered on the economy, such as this June 2 post on Finance Geek: "As the president works on his golf game, the economy is coming apart again. Housing is taking another leg down, job gains seem to be tailing off and a fiscal iceberg lies just ahead. Will someone sound the alarm?" 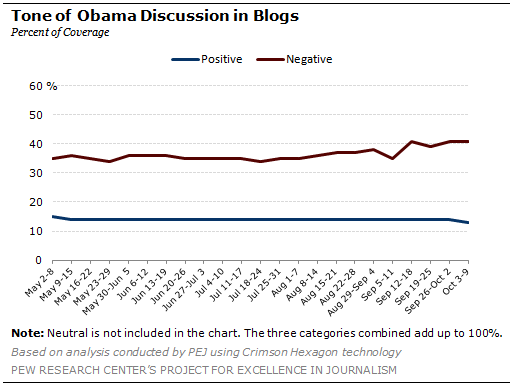 Obama also took heat from the left in blogs as with this September 3 post on the greenreflection site taking issue with his move to ease off environmental regulation under the headline: "Not a good week for Barack Obama, or the environment."

"The decision to kill the EPA’s new rules on smog is making a lot of supporters angry. Michael Tomasky calls Obama A President Adrift in the Daily Beast."

Many bloggers are staunch foes of Obama and deeply suspicious. On September 29, the New Trommetter Times site warned that the president might try to "manufacture some crisis, and "October surprise," just before the 2012 elections," to ensure re-election. "But I’ve got a message for Barack, you’re no George Bush," the post continued. "You’re certainly no Ronald Reagan. The only President you can be compared to is failed, one-term President Jimmy Carter."

Next: Methodology
← Prev Page
Page2Page3Page4Page5Page6Page7Page8Page9You are reading page10Page11Page12
Next Page →