Texas Congressman Ron Paul and his supporters have complained that he is being ignored by the traditional media. PEJ’s data finds that he ranked last,No. 10, among the Republicans whose coverage was examined in this study,appearing as a primary newsmaker in only 2% of all election stories.[1]

Since July 1, however, Paul has moved up slightly, generating more coverage than Gingrich. 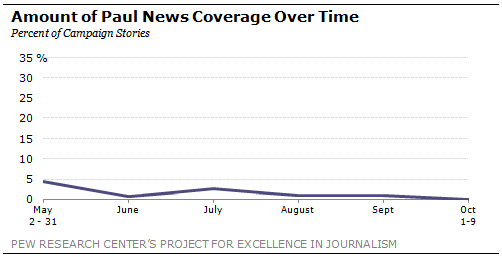 The tone of Paul’s coverage was fairly divided. It resembled the coverage of another candidate whose chances were treated in the press as slim, Jon Huntsman. In all, 21% of the coverage of Paul was positive, 17% negative and 62% neutral.

The arc of that coverage was also very consistent. Paul enjoyed a narrow edge in which positive coverage slightly outweighed negative every week except one. Ironically, that one negative week, and it was also closely divided (15% positive and 17% negative), occurred from August 8-14, the same week he registered a strong No. 2 showing in the Iowa straw poll. 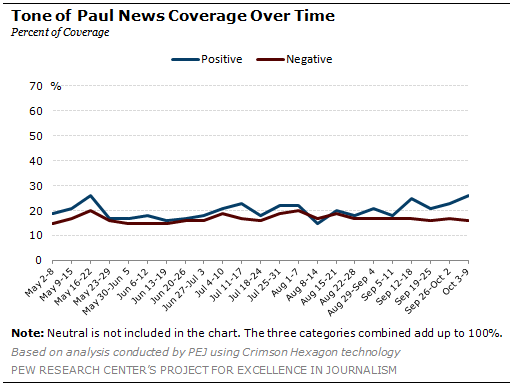 Paul is the field’s only strict libertarian, in that he believes in a limited government role in both domestic and foreign/military policy, a stance that may also limit his electoral appeal. But some of his positive coverage cited his principled stands and enthusiastic supporters.

"Paul is the kind of conviction politician America needs," wrote an analyst for the Hill, critical of what he called the "contemptuous treatment he receives from the mass media."

An example of less-than-flattering treatment,was this August 16 column in the Los Angeles Times by conservative commentator Jonah Goldberg:"Ron Paul’s second-place finish [at the Iowa straw poll] proves that it’s in no meaningful way a real poll, as his supporters are akin to ‘Battlestar Galactica’ loyalists at a ‘Star Trek’ convention, incapable of winning many converts and themselves unwilling to switch teams."

That helps explains why Paul’s strong showing at that Ames event did not elevate his narrative in news media.

Paul’s media base lies elsewhere—in the blogosphere. Paul has demonstrated a core of support in that media space that no other candidate can touch. 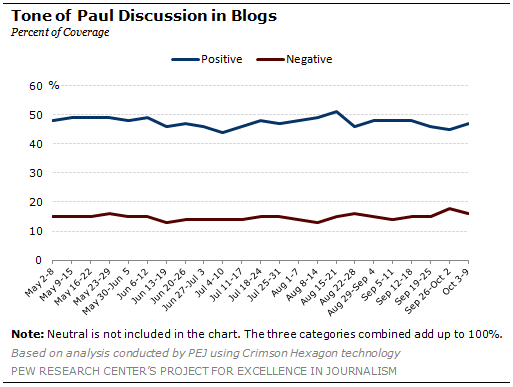 Paul generated a good deal of attention on blogs, registering as the fifth most-discussed candidate with more than 89,000 opinions tracked about him.

Moreover, he and his candidacy fared better than any other candidate in the tone of that conversation. In all, 48% of the blogging conversation about Paul was positive compared with only 15% negative and 38% neutral. The next highest positive rating for any Republican was 34%, for Romney, and the next lowest negative rating was 24%, for Cain.

In the ideology-driven blogosphere, a major wellspring of Paul’s support is the idea that he is the candidate least likely to shift his thinking to fit political realities.

In early August, for example, the Insights blog reported on a poll showing Paul with an impressive 16% support in the GOP primary field, and found another nugget in the data.

“An interesting side is as Rasmussen points out, 49% of people who would vote for Ron Paul, will not vote for anyone else in the Republican Party…I’m not surprised at all. Why would anyone who values the Constitution, free-markets and a non-interventionist foreign policy, cast a vote for any of the others?”

Added a writer on the The President blog: “In my humble opinion, Ron Paul is the only candidate running for president who hasn’t compromised his principles due to political pressure…Paul cannot be bought off and never caters to narrow special interest groups.”