Though she never entered the race, Sarah Palin did relatively well with the news media she often criticizes. She generated a good deal of attention, and a good deal of it was positive.

Overall, she was the No. 4 newsmaker among Republicans. And while the majority of that came in May and June, Palin made news whenever she hinted about getting in.

Over those five months, moreover, she enjoyed the second-best tone of coverage of any GOP figure studied in the news media, slightly ahead of Bachmann.

The data also suggest that Palin shared one other characteristic with Bachmann, as well as with Perry, two other candidates associated with the Tea Party movement. She had a far tougher go in the blogosphere than the news media.

With the majority of her coverage coming in May and June, when she trailed only Gingrich and Romney in that category, Palin was a primary figure in 7% of all campaign stories studied, enough make her No. 4 in the competition for coverage among the GOP candidates.[1] That put her ahead of Cain, Gingrich, Huntsman, Paul, Pawlenty and Santorum. 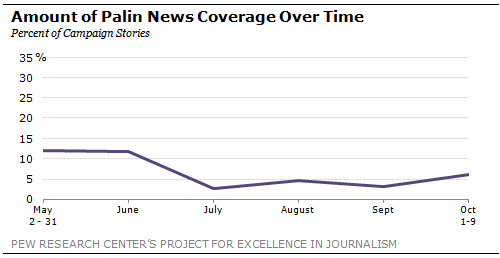 The week of May 23-29, she was the top GOP newsmaker because her bus tour and a report of her buying a $1.7 million home in Arizona triggered speculation about her running. The following week (May 30-June 5) Romney announced his candidacy and appeared as a dominant newsmaker in 43% of the stories about the campaign. But Palin was close behind (37%) thanks to her showing up in New Hampshire on Romney’s big day and also for a mini-controversy she ignited by offering an unusual historical account of Paul Revere’s midnight ride.

As more candidates launched their campaigns and Palin remained on the sidelines, her coverage diminished. But it never disappeared and she seemed able to trigger a new round seemingly whenever she wanted. When she told Fox News’ Sean Hannity, that “I am still considering” a run for president on August 12, she managed to cut through the clutter of Iowa straw poll week and emerged as a dominant newsmaker in 7% of campaign stories.

Two weeks later (August 29-September 4) Palin was a dominant newsmaker in 12% of the campaign stories when word surfaced that she would be speaking in two states with early 2012 electoral tests—Iowa and New Hampshire.

With a few exceptions, the tone of Sarah Palin’s coverage in the news media was upbeat. Overall, 31% of the coverage and commentary about her was positive and 22% was negative while 48% of the discussion was neutral.

In what may seem like a circular narrative, moreover, Palin’s ability to generate attention became a significant source of that positive coverage.
There was, for example, the buzz generated back in May amid news of a new documentary film, “The Undefeated,” that painted a glowing portrait of Palin. One story about that movie reinforced the idea “that Palin has transformed herself into an aspiring queen of all media.” 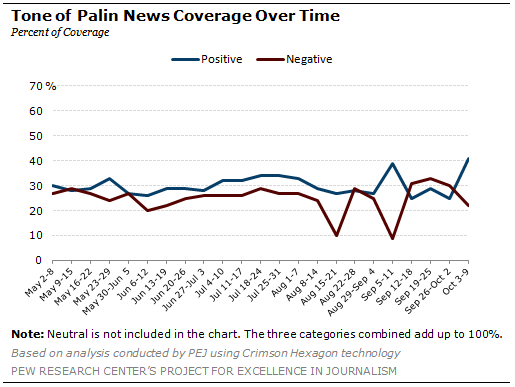 Another example of Palin-centric media generating positive press coverage occurred in mid-August when she released a video of her visit to the Iowa State Fair. As an August 19 Los Angeles Times story stated, the video not only “is certain to fire up yet another round of will-she-or-won’t-she speculation about a presidential bid,” it also portrayed her in a very positive light with “Iowans praising Palin as ‘down to earth,’ a ‘normal person’ and ‘solid.’”

Her best overall week of coverage in terms of the ratio of positive to negative assessments—September 5-11, at 39% positive and only 9% negative—was driven by her star power among conservative supporters. After her Labor Day appearance before a Tea Party rally in New Hampshire, one of the headlines was “Palin draws double the size crowd as Romney.” That came on the heels of a September 4 story in the Des Moines Register about an Iowa appearance that began: “Thousands of people who waited through hours of steady rain cheered wildly and blew air horns when Sarah Palin took the stage Saturday afternoon.”

Some of the negative coverage, meanwhile, included stories critical of her failure to commit after an extended flirtation with running. An August 25 story in the New York Daily News, for instance, declared that “to those who want to unite behind one strong GOP nominee, she is becoming a distraction, one that hurts the Republican Party’s chances of beating President Obama.”  The sentiment was echoed in the Wall Street Journal’s conservative opinion pages, which ran the damning headline “Palin Fatigue” in early September.

For the most part, the treatment of the Palin in the news media was also fairly consistent. Positive coverage about her outweighed negative coverage in 17 of the 23 weeks studied.

The tone of Palin’s media narrative did turn negative, however, in mid-September and remained so for the next three weeks. That was due in part to publicity focused on allegations about her in Joe McGinniss’s controversial book, “The Rogue,” which came out that month.

At the end of that stretch, she finally declared herself a non-candidate, generating her second-best week of coverage during the five months studied—41% positive versus 22% negative.

Quantity and Tone of Palin in Blogs

As much of a draw as Palin was in the news media, she proved to be an even hotter topic in the blogosphere. According to the analysis using Crimson Hexagon technology, there were almost 138,000 opinions tracked about the former Alaska governor in the blog posts examined between May and October. That made her the most-discussed Republican on blogs.

But much of that discussion was negative. Only 19% of the online conversation about Palin was positive compared with 45% negative and 36% neutral. (Those numbers closely matched Bachmann’s 19% positive, 44% negative, and 37% neutral). 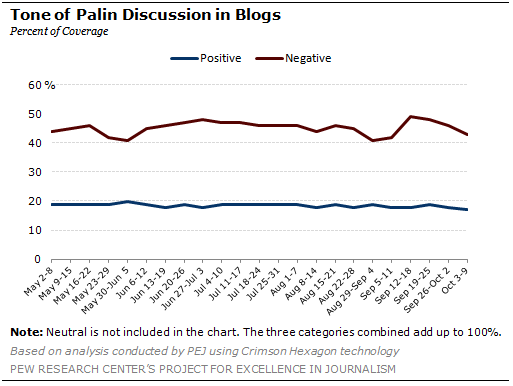 Some of the criticism was about her fame. After she appeared on the cover of Newsweek this summer, The Reaction blog chastised Palin and the media for covering her. “She’s not serious about politics and certainly not serious about a presidential run. But she has to tantalize both her supporters and the media, as well as much of the political establishment, with the prospect of a run in order to keep her name out there, to keep all of us talking about her, to be able to push that egotistical cause as far as possible.”

For Palin’s supporters in the blogosphere, however, any hint of a run was invigorating. An August 31 posting on Marathon Pundit announcing Palin’s appearance at a New Hampshire Tea Party rally quoted the event chairman’s declaration that “she is an electrifying figure in conservative politics and a hero to the tea party movement.”