No candidate had more of a roller coaster ride in the 2012 campaign media narrative than Minnesota Congresswoman Michele Bachmann.

In five months, Bachmann went from a long-odds outsider to a surprise top tier candidate to long shot again. In between, she was subjected to one of the modern pitfalls of a suddenly rising candidate—a hurried and partial media vetting of resume and personal life that often produces unflattering coverage. 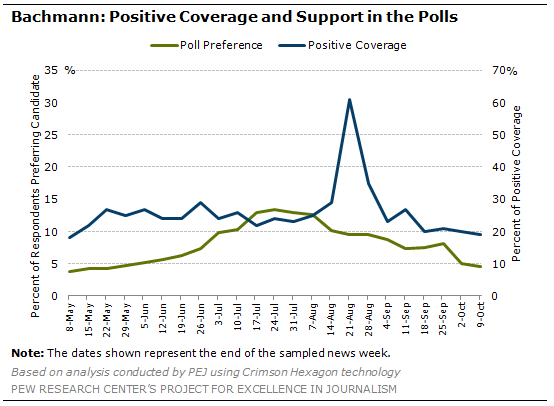 The other feature of Bachmann’s candidacy that stands out thus far is that it has received better treatment from news outlets than from social media. For a candidate aligned rhetorically with the populist Tea Party movement, she has not been as popular with political bloggers where negative commentary outstripped the positive by more than 2-1.

Over the course of the five months from May to October, Bachmann trailed only Rick Perry and Mitt Romney in the competition for media attention. Overall, she was a primary newsmaker in 9% of all the stories about the campaign. [1] She started small. In May, Bachmann trailed five other GOP figures in the level of attention received—including Romney, Gingrich, Palin, Pawlenty and Paul.

That changed dramatically in June after what was perceived as a strong performance during the June 13 CNN debate. For the month of June overall, she was the second leading newsmaker among the Republican hopefuls behind Romney. 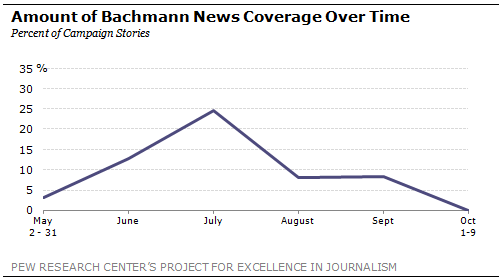 And in July Bachmann was the most covered candidate of all, as the media began subjecting her to closer scrutiny.

Bachmann’s lead in the race for exposure, like her lead in the polls, was short-lived. In August, as the media gravitated to the race’s newest entrant, Texas Governor Perry, Bachmann became the third candidate, figuratively in the political calculus and literally in the amount of coverage received. For the month, she was a primary figure in 8% of stories. September was the same story. Bachmann again ranked No. 3 in coverage (at 8%), trailing Perry by about a 4-1 margin.

Tone of Bachmann in News Coverage

All in all, Bachmann enjoyed the third-best coverage of any candidate when it came to tone in the coverage and commentary in the news media from May to October. She tied with Palin and was close to Perry in the amount of news coverage that was clearly positive at 31% (Perry was 32%), but she received more negative coverage than both of them—23% (versus Perry’s 20% and 22% for Palin). Another 46% of that treatment of Bachmann was neutral or straight factual accounting of events about her, which was the lowest percentage of neutral coverage of any candidate studied.

The trajectory of Bachmann’s coverage was also bumpy. She had distinctly good weeks and bad weeks. The good ones simply outnumbered the bad.
The good weeks began early. From May 9 through June 26, Bachmann enjoyed seven consecutive weeks during which her coverage was more positive than negative, though some of those were fairly evenly divided. 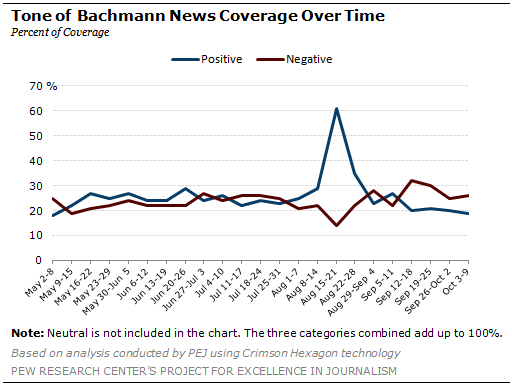 The period included, but was not initiated by, her June 13 debate performance. According to the numbers, her best week in this early phase was from June 20-26, when the media linked the   debate with a rise in the polls.

“A national poll of Republican voters after the debate found Bachmann had surged into second place at 19 percent behind Romney,” thanks in part to her “combative style in the CNN debate,” declared the political website Capitol Blue, less than a week after that debate.

A week later, however, the last week in June, coverage tilted toward the negative again (24% positive and 27% negative, and 49% neutral), as the media took a closer look at her as a major contender. Then, in July, Bachmann had three weeks of negative coverage.

The tone changed in part because the media began to focus on more personal matters—including her health and her husband, Marcus. One element was the accusation that Marcus operated a counseling practice that tried to convert homosexuals to heterosexuals through prayer. Some coverage also focused on reports that Bachmann suffered from debilitating migraines—raising questions about her ability to function.

Columnist Kathleen Parker saw a suspicious link between the migraine story and the progress of Bachmann’s campaign, writing that her “migraine problem mysteriously hit the news cycle just in time to coincide with her moving ahead in the polls.”

Then the tone of the narrative about Bachmann changed again, this time for the better. The week after she won the August 13 Ames straw poll, she had her best week of coverage (61% positive, 14% negative), and in many media accounts, the Iowa win affirmed her status as a surprise serious candidate.  The Washington Post concluded for example, that “her victory in Saturday’s straw poll cemented her status in the upper ranks of the GOP field.”

But that cement did not hold. After the week of August 22-28, Bachmann would have only one more week in which positive treatment in the media outweighed negative, Sept. 5-11.

Some of it was her own doing, including her remarks—that she said were a joke—that the recent hurricane and earthquake on the East Coast were warnings from God to U.S. politicians. That re-opened questions about Bachmann’s religious beliefs and whether her views were outside the U.S. mainstream.

The other momentum stopper was a series of polls reacting to Rick Perry’s entrance in the race. On September 1, for instance, Fox News released a new poll showing Perry the preferred candidate of 26% of GOP primary voters and Bachmann plunging to 4%.

A few days later, top Bachmann advisor Ed Rollins was quoted downplaying Bachmann’s chances by saying that, “The Perry-Romney race is now the story, with us the third candidate.” Rollins would soon have a much reduced role in Bachmann’s campaign operation.

Coverage and Tone of Bachmann in Blogs

Bachmann got more attention than any Republican other than Sarah Palin and Mitt Romney in the blogosphere. There were almost 119,000 opinions tracked by bloggers about her over those five months.

But that doesn’t mean she was treated well.  From May 2 through October 9, only 19% of the conversation on blogs about her was positive compared with 44% that was negative and 37% neutral. That put her among several prominent Republicans perceived to be potentially exciting to the party base—including Sarah Palin and Rick Perry—whose negative treatment in blogs far exceeded the positive.

Many Bachmann critics in the blogosphere attacked her for high-profile gaffes she made during the campaign, using that as a proxy to challenge her intellect. After she incorrectly stated that the actor John Wayne had been born in her hometown of Waterloo Iowa, when it was actually serial killer John Wayne Gacy, the Truth Wins Out blog posted a fairly typical comment.

“Given Bachmann’s anti-intellectual style, it is not surprising that she either makes things up or fudges the facts,” the post asserted.  But, one would think that by now—the day she launches her presidential bid in Waterloo, Iowa—she would have hired competent staff to fact check her speeches and public statements.”

Other ideological foes of Bachmann painted her as an extremist, like the Mills River Progressive blog, which asserted that Bachmann “apparently wants to have herself a little ol’ Theocracy, based on conservative Christian principles.” 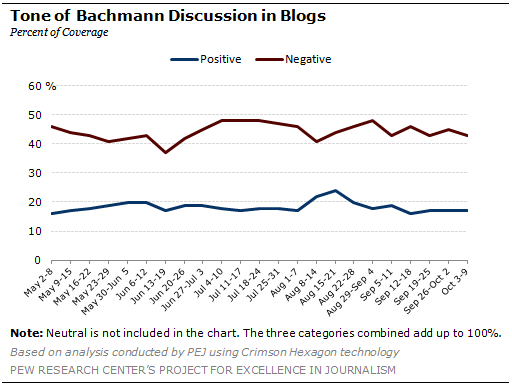 And much as was the case in the news coverage, a good deal of the positive conversation about Bachmann in the blogosphere were posts that linked to news about her rise in the polls and her emergence as a potentially serious candidate with lots of support from the party’s conservative wing.

“Sarah Palin was supposed to be the Tea Party’s choice for Republican presidential candidate,” declared the Death by 100 Papercuts blog on July 22. “But now it has a new darling—Michele Bachmann. Bachmann’s hard-right conservatism is winning over evangelical Republicans. She now leads the Iowa straw poll.”