The NetView data does not breakdown the behavior patterns like time spent or return visits for the various demographic groups. It would be interesting to know, for example, if women tended to return more times over the course of a month or if younger cohorts stayed a shorter amount of time than their older counter-parts.  Nevertheless, at the more summary level, some interesting differences emerge among the top 25 sites when compared with Internet users overall. [1] 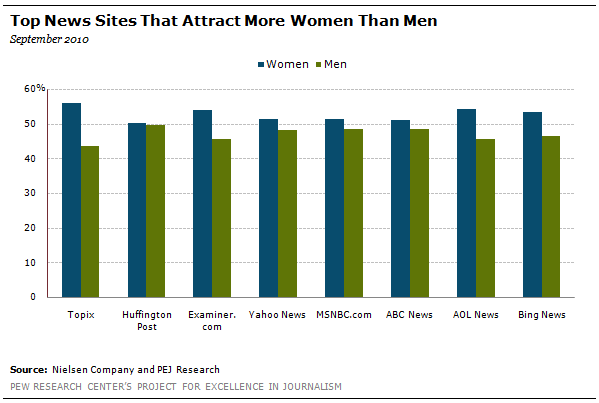 The most striking differences occur in gender. While usage of the Internet overall is roughly equal among men and women, [2] this is not the case for the top news sites. Some of the top news sites clearly appeal more to men while others attract more women. On eight of the top 25, sites women outweigh men and on four of the sites by more than five percentage points.  On the 17 other sites, the reverse is true.

One split occurs in the Websites that offer their users a host of services. AOLNews.com, YahooNews.com and BingNews.com draw a heavier female audience while more men turn more to Google News.  On Google News, men outweigh women by 10 percentage points, 55% to 45%. But at Aolnews.com the reverse is true, 54% women to 45% men.  YahooNews.com, another multi-service provider, is more evenly split but attracts more women (51%) than men (48%) as does Microsoft’s search engine BingNews.com.

Men, on the other hand, tend to dominate the business-oriented news sites on the list. The starkest difference is on Reuters.com, which has nearly twice the percent of men as women, 64% versus just 36% for women.  Similarly, on the Wall Street Journal (WSJ.com) and SFGate.com men outnumber women, 60 to 40%. 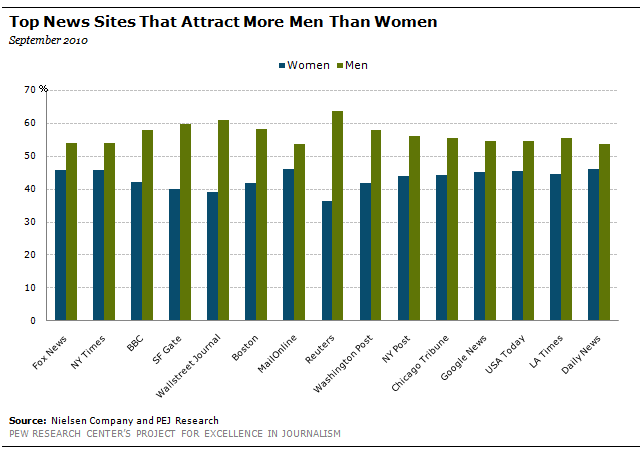 Huffingtonpost.com had the greatest proportion of younger adults (18- to 34-year-olds. Fully a third (32%) of its users fell in that group.  Google News brought in the greatest portion of the very young, 2-to-11 year-olds. The site with the oldest cohort was FoxNews.com, with 15% of its audience over the age of 65.

Overall, the audiences to these top news sites break down fairly similarly to Internet users overall.

That stands in contrast to news consumption patterns in older legacy media platforms like network tv, where news consumption tends to skew heavily toward older Americans. This might bode well for the future of news.

Education fits a similar pattern with online news users tending to be more educated than Internet users overall. On the top news sites, those with a bachelor’s degree make up between 25% and 29% of the audience, compared with roughly 21% of general Internet users.

FOOTNOTES:
1.The demographic data analyzed here are from Nielsen’s NetView database from September 2010 and are derived from the same panels that are used to gather audience data.

Next: About the Study
← Prev Page
Page4Page5Page6Page7Page8Page9Page10Page11You are reading page12Page13Page14
Next Page →

Navigating News Online The Top 25 Who Drives Traffic to News Google Drives Most Users Facebook Is Becoming Increasingly Important Drudge Report: Small Operation, Large Influence Twitter How Users Interact With News Where Users Go When They Leave Google: Parasite or Provider? The Importance of the Home Page
Demographics
About the Study Topline