Within each of the larger topic areas, there were specific news events or storylines, as well.

The largest of these, the No. 1 technology story from June 1, 2009, to June 30, 2010, was the practice and danger of texting while driving. And the higher amount of coverage of the subject did not stem from one main event or big week of news. Instead the stories were spread out over the course of the year as new research emerged and 23 states considered banning the practice.

Many news organizations reported on a study published in July 2009 that showed that truck drivers who texted while driving increased their risk of a crash 23 times. Dialing a cell phone increased the risk of collision about six times in cars.  On Good Morning America on July 28, 2009 Chris Cumo reports “A new study finds texting behind the wheel may be more dangerous than drunk driving.” 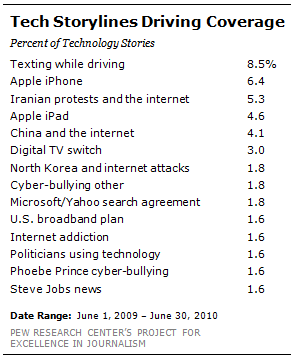 The New York Times even won a Pulitzer for a series it ran in the summer of 2009, called “Driven to Distraction.” The series examined “the dangers of drivers using cellphones and other electronic devices, and efforts to deal with the problem.”

On a more local level, a Seattle Times story on March 4, 2010, discussed how the Washington state House of Representatives passed a law barring teenagers from texting while driving or using cell phones of any kind behind the wheel.

The subject even got a dose of celebrity coverage when in October 2009 the gossip website TMZ posted a video of Maria Shriver, the wife of California Governor Arnold Schwarzenegger, breaking the state’s law prohibiting the use of cell phones while driving. Schwarzenegger responded by sending a Twitter message to TMZ editor Harvey Levin saying, “Thanks for bringing her violations to my attention. There’s going to be swift action.”

Newspapers and radio headline news gave particular attention to the subject. The radio headlines stand out in particular as they fall during “drive time”–perhaps aired as a cautionary note to all those listening.  On a May 24 2010, on the ABC Radio headlines during the afternoon rush hour, Sherry Preston of ABC news echoed this idea  “If its driving instead of riding your prefer, transportation secretary Ray LaHood says the government is committed to cracking down on distracted driving.”

While the dangers of texting while driving are clear, the topic received far more attention than a number of other significant tech subjects that also impact millions of Americans. For example, texting while driving received more than five times the amount of attention as legislative stories such as the National Broadband Plan for the United States and more than six times the number of stories as the controversy over net neutrality, a legal decision that could have a large impact on the future of the internet.

The second and fourth biggest stories from mid- 2009 through mid-2010 involved new offerings from Apple. With the releases of the iPhone 3GS in June 2009 and the release of the iPhone 4 in June 2010, the iPhone was the second-largest storyline with 6% of the stories covered. However, a number of Apple-focused stories received attention. In fact, four major storylines of the year involving Apple (the iPhone, the iPad, news about Apple’s CEO Steve Jobs and the Apple App store) combined to make up 14% of the overall tech stories.

While newspapers stood out for their attention to the practice of texting while driving, they stood out here for largely opting out of Apple coverage.  The iPad accounted for just 3% of the front page technology stories and the iPhone 1%.

Next: Technology is a Global Topic
← Prev Page
Page1Page2Page3You are reading page4Page5Page6Page7Page8Page9Page10
Next Page →