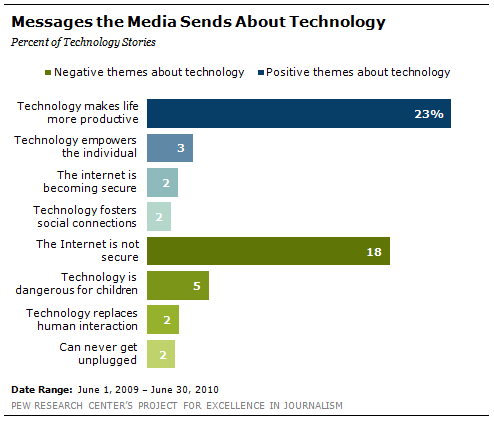 The general topic areas of coverage alone reflect some of the dual sense about technology that came through in the media, a sense of unease and excitement. To probe further, the study also looked at how the stories were explicitly written, in addition to what they were about.  We examined each story for central themes about the role of technology in our lives. What we found reinforced the media’s mixed portrait.

There were eight clear narratives or themes reflected in the coverage, four that were positive and four that were negative: The positive themes were that technology empowers the individual, fosters social connections, makes life more productive and that the internet overall is becoming more secure. On the negative side was technology replacing human interaction, being dangerous for children, unsecure for personal or national information and the sense that with technology today we can never get “unplugged.”

A sizable minority of stories, 43%, did not strongly convey one theme or another; they were basically straight news accounts of an event that was neutral in nature.  [1] But most, 57%, did reflect one of the eight narratives.

In those stories that contained a theme, the mix of positive and negative messages was pretty even.

In the overall sample, about 30% of the stories were positive compared with 27% negative.

The theme identified more than any other was the idea that technology makes life more productive, fosters creativity, and can facilitate the dissemination of information. About a quarter of the stories studied (23%) reflected this notion.

These stories were wide in scope, from the announcement of a product that will give users new capabilities, to the role of Twitter in the Iranian protests, and, as in this Los Angeles Times story, that the increasingly wired world can be an aid for child development.

But nearly as prevalent was a counter idea. The sense that technology and the internet are not secure for personal or government information was the second largest theme, at 18%. The subjects of these stories varied as well, from personal identity theft to the security of government information online.  A CNN Live From story on February 8, 2010, for instance, discussed the FBI’s request that internet service providers maintain traffic reports on their users for up to two years.

Another 5% of the stories aimed this cautious note specifically at the youth in this country—suggesting that technology, and specifically the internet, can be a dangerous place for children and teenagers.  These stories, often short, appeared most in daytime cable and in radio headlines.

The radio headlines summarized recently released research on the topic, like this story from CBS Radio on June 24, 2009 on sexting.

The other themes examined were much less prevalent in the coverage. On the positive side, the sense of the internet empowering individual citizens came through clearly in just 3% of the stories studied—primarily in coverage about the Iranian protests. And technology’s ability to foster social connections and the idea that some organizations are taking steps to make the internet and technology more secure were even less present.

On the negative side, concerns about technology replacing human interaction emerged in 2% of the stories.   One such story was this ABC News radio headline about a psychologist saying that he is seeing more people who are dangerously addicted to Facebook.

1. For a story to be counted as having a theme, 25% or more of the story had to specifically portray that message.

Next: Texting While Driving – The MSM’s Biggest Tech Storyline of the Year
← Prev Page
Page1Page2You are reading page3Page4Page5Page6Page7Page8Page9Page10
Next Page →