In the battle among the tech titans, Apple Inc. won the title in the last year for press appeal.  The 34- year-old company attracted more coverage from the mainstream press than any other technology company – and the bulk of it was positive. Its popular devices and orchestrated PR strategy helped it even outpace Google Inc. 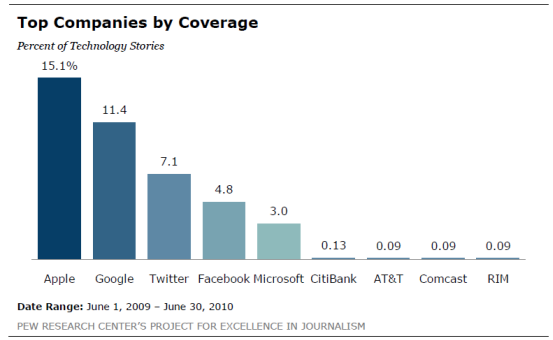 From June 2009 through June 2010, 15% percent of the technology stories focused primarily on Apple, versus 11% about Google.

The two social media platforms, Twitter and Facebook, came next (7% and 5%). Twitter’s coverage during this time period largely centered around its communication role during the Iranian protests in the summer of 2009. Attention to Facebook was largely focused on the service itself and its interaction with its users.

Microsoft, on the other hand, received little press at all. After being arguably the most important technology company, even as recently as five years ago, run by the richest man in the world and the world’s most powerful monopoly, Microsoft has, at least for now, fallen off the mainstream media’s radar. It received just one-fifth the coverage of Apple, less than a third the coverage of Google and less than half the attention of Twitter. The one area of attention came in the search agreement with Yahoo in which Yahoo searches are now run on the Bing search engine. As this July 29, 2009, Wall Street Journal article explains, “Under the deal, Yahoo will make Microsoft’s Bing search engine the search provider on its Web sites, licensing its own search technology to Microsoft to integrate if it chooses.”

But the media paid little attention to any other technology players. No other company, including technology giants such as Amazon, Best Buy or Yahoo, registered more than 1%. And in covering these companies, the mainstream press focused heavily on the positive.

The media’s take on Apple from June 2009 through June 2010 would make Steve Jobs proud. More than 40% of the stories about Apple suggested that its products are innovative and superior in quality. [Note: stories may carry more than one thread so the totals may not add up to 100.]

In this June 23, 2010, USAToday.com review of the iPhone 4, the author asserts, “The new iPhone….demonstrates once again why Apple’s handset is the one to beat, even as it faces fierce competition from phones based on Google’s Android platform, among others.”

Another quarter of stories, 27%, highlighted the company’s loyal fan base. Often this had to do with announcements of new products, such as this June 7, 2010, USAToday.com article about the imminent announcement of the iPhone 4: “It doesn’t matter that the iPhone is now in its third year and that what is likely to emerge is merely an update. Legions of tech geeks, Apple competitors and ordinary consumers will be hanging on Jobs’ every word.”

And what about problems like ineffective touch screen, poor connections or limited user freedoms? Hard to find in this media coverage—just 17% suggested the products are overhyped, and less than half that, 7%, portrayed the company as too controlling with its products.

In Google’s case, positive themes governed the coverage as well, though not quite to the same extent as Apple. Half as much of Google’s coverage as Apple’s, (20% versus 42%), portrayed its products as innovative and superior. In this May 11, 2010, MSNBC Live clip CNET analyst Maggie Reardon says that “One key difference that techy geeks talk about is multitasking, something that you are able to do on an Android phone that you can’t do on an iPhone.”

But even more stories, 25%, emphasized Google’s help in navigating the Web by making content more searchable and easier to find. However, the third most prominent thread about Google was a negative one.

The theme that gave Google the most trouble is one that often accompanies a fast-growing, dominant company within any industry. The idea that the company has too much information and too much power appeared in 19% of the stories about Google (the third most-mentioned thread overall). This idea appeared in a story on Fox News Live about a scandal where Google streetview cars were accidentally collecting personal information.

Google was largely off the hook in the media’s eyes, however, when it came to accusations that the company steals others’ content, including the news media’s. This theme emerged in just 2% of the stories.

For the two most written about social media networks, Twitter and Facebook, fewer distinct themes have emerged at this point. The two competing ideas surrounding Twitter are that the network helps disseminate information and connect people and that communication there is often pointless and self-centered. In this coverage, especially centered on Twitter’s role in Iran, the positive influence heavily dominated. More than two-thirds of stories (68%) highlighted its role as a disseminator of information, while just 4% focused on the pointless nature of posts.

Facebook received largely positive press as well, though it suffered some from controversies surrounding its privacy settings. Most stories, 36%, articulated the value of Facebook in fostering communication; another 17% extolled its related role in bringing people together. But more than a quarter, like this AOL story from May 26, 2010, discussed users’ dissatisfaction with Facebook’s privacy changes and Facebook’s attempt to alleviate those concerns.

For more information Google, see PEJ’s “Who Owns the News Media” database of the top media companies in the U.S.