The Media’s Double Vision about the Digital Age

The mainstream news media have offered the American public a divided view of how information technology influences society, according to a new study by the Pew Research Center’s Project for Excellence in Journalism.

Over the past year, messages about the promise of technology making life easier and awe about new gadgets have vied in the news with worries about privacy, child predators, shrinking attention spans and danger behind the wheel.

The most prevalent underlying message about technology’s influence has been upbeat—the notion that technology is making life easier and more productive. Nearly a quarter of all technology stories studied from June 1, 2009, to June 30, 2010, conveyed this idea. But that was closely followed by the sense that with that convenience comes risk—to our privacy and particularly to our children—which made up nearly two-in-ten stories, according to the study. [1] 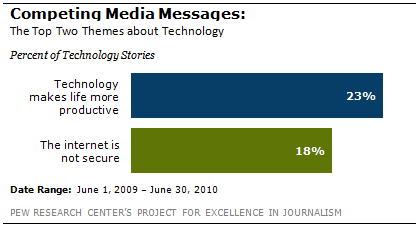 These are some of the findings of the PEJ study of 437 technology-related stories appearing in the lead sections of 52 different news outlets: front pages of 11 newspapers, three cable and three network news channels, 12 websites and 10 radio programs. [2] The study was designed to examine the media coverage that occurs when technology news crosses beyond technology-oriented outlets or news sections to the top of the American news agenda—to front-pages, the national nightly news, cable prime-time and other general interest news outlets. It did not delve into specialty publications or sections.

The biggest single event or storyline during the year involved the perils of technology: the hazardous yet compulsive practice of texting while driving. Nearly one-in-ten technology stories were about this subject, more than five times the coverage of either the U.S. plan for broadband access and six times the coverage devoted to the debate over net neutrality. [3]

The second-biggest storyline addressed a more positive development: the launch of the latest Apple iPhones. Attention to the release of the iPad was not far behind.

While the mainstream press had a split vision of technology, social media reflected a different set of attitudes. An examination of blogs, social media sites and Twitter posts found more excitement about technological advancements and the businesses behind the developments. And the concerns, when there were some, focused on obstacles to technological freedom, such as pending court cases, which might get in the way of progress.

The study also examined which technology companies generated the most media attention in these venues. Apple, with its flashy press events and often drawn out releases of new products, narrowly outpaced Google in total coverage. Twitter and Facebook ranked third and fourth. Microsoft, on the other hand, once the feared technology behemoth, fell far behind—attracting just a fifth of the coverage of Apple and less than half that of Twitter.

Among the other findings: 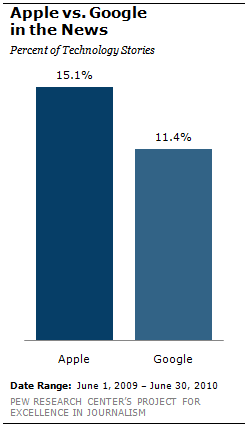 The findings suggest that in the mainstream media, particularly on front pages and general interest programs, the press reflects exuberance about gadgets and a wonder about the corporations behind them, but wariness about effects on our lives, our behavior and the sociology of the digital age.

Social media, on the other hand, suggests that people who are on the cutting edge of technology are not only more interested in discussing the topics, but more positive in general about specific advancements, like new versions of smartphones or new social networking sites.

How much do you know about technology and the media? Take PEJ’s new quiz to find out.

Footnotes
1.General technology threads are the concepts or impressions that form around technology as a whole in a given story. For a story to be coded as containing a thread, it had to be prevalent in at least 25% of the story.

2.There were 953 technology stories in total over the course of the 13 months. PEJ staff then selected every other one in each program or newspaper, 437 in total, for further coding analysis.

3.Net neutrality is the concept that all traffic on the internet should be treated equally. Under the principle of net neutrality, internet service providers would not be allowed to favor certain sites or services over others.

Next: Social Trends and New Devices Garner Greatest Attention from the MSM
← Prev Page
You are reading page1Page2Page3Page4Page5Page6Page7Page8Page9Page10
Next Page →