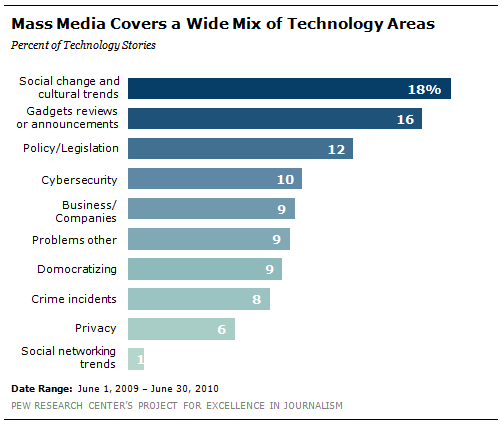 If all the topics covered in technology in the past year are taken together, they fall into a handful of categories. A host of explicit problems—from cyber-security, to privacy concerns, crime incidents and more—made up a nearly third (a combined 32%) of the technology coverage. The combination of stories about social and cultural trends and the democratizing power of technology made up one quarter of all stories (26%).  These stories embodied both promise, and sometimes concerns. Reviews about the release of new gadgets and products made up 16%. And a combination of corporate news and policy legislation stories filled another 22%.

The single biggest topic of coverage was the discussion of social and cultural trends.  These stories, which made up a fifth of the coverage (18%), included technology’s positive effects on human interactions, like parents’ texting with their children and the opposite effects of less face-to-face connections.

In many cases, these were enterprise or newsroom initiated pieces not tied to a national event. On August 9, 2009, for example, the New York Times ran a story about high schools that are encouraging teachers to use technology such as PowerPoint presentations and videos in their classrooms rather than traditional textbooks. And on April 29, 2010, ABC’s World News Tonight featured a report about high school students posting creative videos on YouTube to ask out dates to their senior prom.

The second most popular subject area dealt primarily with positive advancements. Reviews and announcements of the latest technology gadgets accounted for 16% of all stories studied. The majority of this focused on the large-scale personal devices, like the Apple iPad and iPhone and to a lesser degree Google Chrome.

“Just when we thought our handheld electronics could do everything, Apple rolls out a new one it says can do everything and more,” CBS Evening News anchor Katie Couric announced on January 27, 2010, leading into a story about the unveiling of the company’s new tablet device.

Click here to watch the shorter version of the story on cbsnews.com

And the democratizing power of the web, particularly in the context of conflicts like the Iranian elections or American politics, filled 8% of the coverage during the 13 months studied.

Of the explicit problems with technology, cyber-security was the biggest topic (10% of stories). Much of this coverage dealt with specific events in the news, such as the July 2009 security breach of South Korean and American websites that was thought to have originated from hackers in North Korea.

Specific crime incidents made up 8% of the coverage. One such event led the Wall Street Journal on December 22, 2009. “The Federal Bureau of Investigation is probing a computer-security breach targeting Citigroup Inc. that resulted in a theft of tens of millions of dollars by computer hackers who appear linked to a Russian cyber gang.”

A variety of other problems associated with technology, from identity theft, to stalking and cyber-bullying, made up another 9%.

Finally, coverage of public policy debates over technology, led by legislative efforts to limit texting while driving, made up (12%). Net neutrality and U.S. broadband policy made up relatively little of that (less than 2%).  Corporate news (other than reviews of new technology) made up 9%.

Next: Technology Aids Life but with Risk Attached
← Prev Page
Page1You are reading page2Page3Page4Page5Page6Page7Page8Page9Page10
Next Page →