Americans’ relationship with news is changing in dramatic and irreversible ways due to changes in the “ecology” of how news is available. Traditional news organizations are still very important to their consumers, but technology has scrambled every aspect of the relationship between news producers and the people who consume news. That change starts with the fact that those consumers now have the tools to be active participants in news creation, dissemination, and even the “editing” process.

This report is aimed at describing the extent of the transformation and the ways in which news serves a variety of practical and civic needs in people’s lives. It focuses on those who receive and react to news and asks questions that are rarely asked about how people use the news in their lives, especially by exploiting the internet and cell phones. The report draws from a national phone survey of adults (those 18 and older) that documents how people’s use of new technologies has disrupted the traditional flow of news to consumers and in communities.

The overarching narrative here is tied to technological change, generational differences, and the rise of a new kind of hybrid news consumer/participator.  These shifts affect how people treat the news, relate to news organizations, and think of themselves as news makers and commentators in their own right. 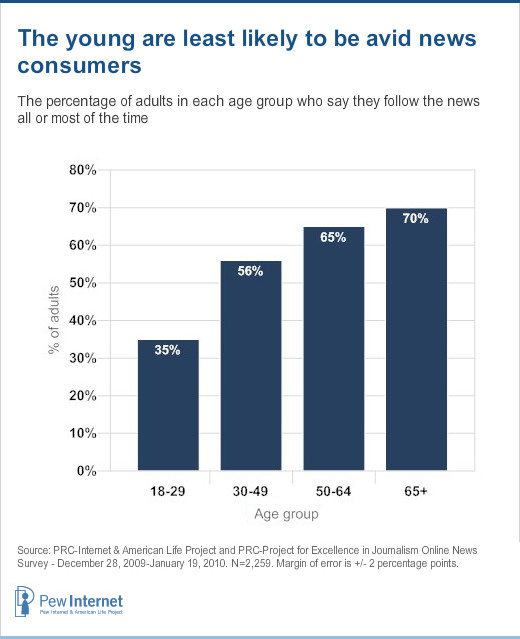 Most people use several platforms as they search for news.

On a typical day:

In addition to exploring people’s use of these six platforms, we asked them about getting news on their cell phones. We found that 26% of Americans get their news from time to time on their handheld device. However, when we isolate the segment of people who access the internet via their phones, we find that 88% of this group gets news at least occasionally on their mobile device.  Complete details about these mobile news consumers are contained in Part 5 of this report.

It is also instructive to compare people who get news from a variety of sources on a given day with those who use only a few sources. Some 46% of Americans use between four and six of the media platforms cited in the bullets above on any given day. Another 46% use two or three platforms and 7% use just one platform. The notion that people have a primary news source, one place where they go for most of their news, in other words, is increasingly obsolete.

Six in ten Americans (59%) get news from a combination of online and offline sources on a typical day, and the internet is now the third most popular news platform, behind local television news and national television news.  While 61% of Americans get news online on a typical day, some 71% get news online at least occasionally and there is a detailed analysis of who they are, what they do, and what they like, in Part 4 of this report.

While people access news on a medley of different platforms during the day, the story of their behavior on the internet is modest. As is the case with the general news ecology, most people do not express loyalty to one primary online news source, nor do they branch out to gather news from a wide array of websites.  Most online news consumers (57%) say they use between two and five online news sources and 65% say they do not have a single favorite website for news. These findings are discussed in detail in Part 4 of the report on the internet and news.

The number of media platforms a person uses turns out to be a strong indicator of people’s news-seeking behavior and attitudes about news and it will be used throughout this report as an analytical tool. For purposes of this introductory material, it is useful to note that those who use 4-6 platforms on any given day are 35% more likely than other Americans to say they follow the news all the time or almost all the time.

On the traditional platforms, here are some of the salient demographic details:

National broadcast and cable TV news:  These are some of the demographic groups that are particularly likely to watch national broadcast and cable TV news on a typical day when compared with other adults: African-Americans, those over age 50, and those who have premium broadband plans that provide extra-fast connections. As is the case with local TV news, Independents are less likely than Republicans or Democrats to get news from a national TV newscast.

Radio news: Looking at those who are most likely to listen to radio news either at home or in the car on a typical day, several demographic groups stand out: those between ages 30-64, college graduates, and those who use the internet and cell phones. Interestingly, those who are online are more likely to get radio news: 57% of internet users get radio news regularly, compared with 44% of non-users. Similarly, 53% of the cell-only population (those who have dropped their landline and rely exclusively on their cell phone) get radio news on a typical day, compared with 39% of those who rely exclusively on landlines.  Radio news is also a major draw for Republicans and conservatives, compared with Democrats, moderates and liberals.

Print version of local newspaper: Those who are particularly likely to read news in a printed version of their local paper on a typical day include: whites, those over age 50, and people who do not own cell phones. Paradoxically, non-internet users and those who have premium internet services are more likely than others to read local newspapers. Those who use text messaging and those who use social media sites like Facebook and Twitter are less likely to read the print version of local newspapers on a typical day than those who do not use those tech applications.

There are some subjects that notable numbers of Americans would like covered more.

Americans may complain about the mix of news stories they get across the variety of platforms, but a majority still think that topic by topic there is sufficient coverage. There is interesting variance across the topics, though, as significant majorities say there is enough coverage of such subjects as: sports and athletes; business and finance; music and the arts; international news; technology; U.S. domestic policy (see table below).

There are five subjects about which noteworthy pluralities of Americans say they would like more coverage. In some of these instances it is interesting to note that younger adults lead the pack in wanting more coverage:

Political Independents differ somewhat in their news tastes from Democrats and Republicans.

Independents are currently the largest political group in America today, representing 34% of U.S. adults.  People who identify as Independents show their distinctiveness in several of these news categories. They are more likely than partisans of either the Democratic or Republican parties to say they want certain topics to get more attention from news organizations. Their distinctive wish list includes more coverage of science, health and medicine, their local communities, U.S. domestic policy, and international news. 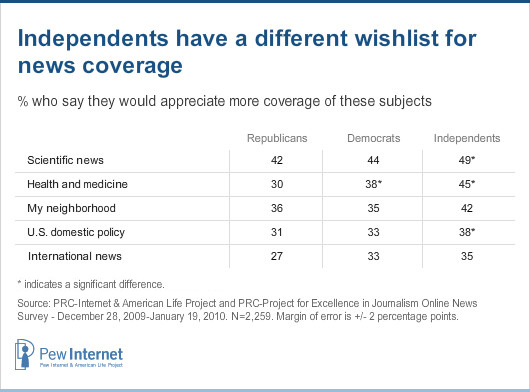 Next: How people use the news and feel about the news
← Prev Page
Page1You are reading page2Page3Page4Page5Page6Page7Page8
Next Page →

Understanding the Participatory News Consumer
The news environment in America
How people use the news and feel about the news News and the internet News on the go – wireless access News gets personal, social, and participatory Methodology Topline