Mobile tech devices, such as laptops, cell phones, smartphones and other handheld devices, are dramatically changing the way Americans access information in their lives. [1] Currently, 53% of adults access the internet wirelessly either through a laptop or a cell phone, BlackBerry or other handheld device.  Pew Internet studies have shown that wireless internet users are different from other online adults in important ways: they are 36% more likely than wired internet users to access the internet on a given day, and they engage in virtually all online activities (including email, social networking, and blogging) at higher rates than other internet users.

To understand the impact of wireless mobility on news consumption, the current survey asked owners of cell phones, BlackBerries and other handheld devices about different ways they might get news on the go.  Overall, 26% of American adults say they get some form of news via cell phone – that amounts to 33% of adult cell phone owners and 88% of adults who have mobile internet. To arrive at that figure we asked the 80% of American adults who own cell phones if they access the internet or email by phone; some 37% say they do.  Among this subgroup of internet-using mobile phone users, we found that the vast majority get some kind of news online:

Overall, cell users under age 50 are almost three times as likely as their older counterparts to get news on the go (43% v. 15%), and they engage in all cell-based news consumption activities at higher rates than older cell phone users. 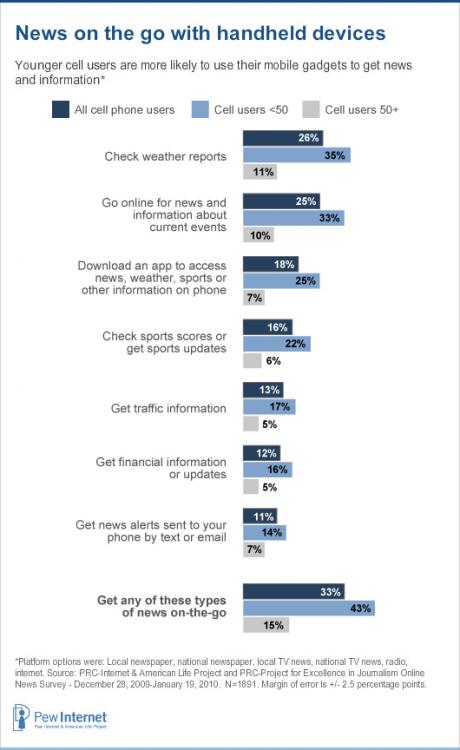 On-the-go news consumers:  Who are they?

The typical on-the-go news consumer is a white male, age 34, who has graduated from college and is employed full-time.  Given their younger profile, it is not surprising that 40% of this group are parents of young children (compared with 30% of the general adult population), and 32% have never been married.  One in three (32%) live in households with incomes of $75,000 or more. As a subset of the broader mobile internet population, on-the-go news consumers reflect many of their characteristics (see table below).

Not surprisingly, on-the-go news consumers maximize their cell phone use.  They are 67% more likely than other cell phone users to text message, more than twice as likely to take pictures with their phones, and four times as likely to use their phones to instant message.  They are also especially heavy internet users—80% of this on-the-go group are online on a given day, compared with just 67% of other internet users—and they engage in activities such as blogging (20% v. 11%), using social networking sites (73% v. 48%), and using status update sites like Twitter (29% v. 14%) at significantly higher rates than other internet users. 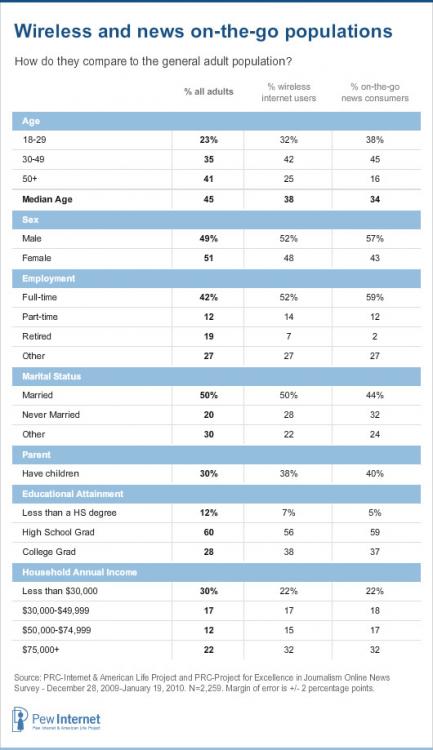 Moreover, the majority of on-the-go news consumers (62%) get news from at least three different online news sources on a typical day, including one quarter (25%) who use at least six different online sources in a typical day.  These mobile newsies use each of the 13 different types of online news sources asked about at higher rates than other online news consumers.  Asked how many websites they routinely rely on for news and information, 60% say they use 2-5 and another 16% say they use 6 or more.

In addition to using multiple news platforms, on-the-go news consumers are interested in a wide variety of news topics.  With the exception of health and medicine, they are more likely than other online adults to use the internet to get news or information about every one of the twelve topics asked about in the survey.  Half of on-the-go news consumers (49%) use the internet to get information about at least nine of those twelve topics, compared with 35% of other internet users. 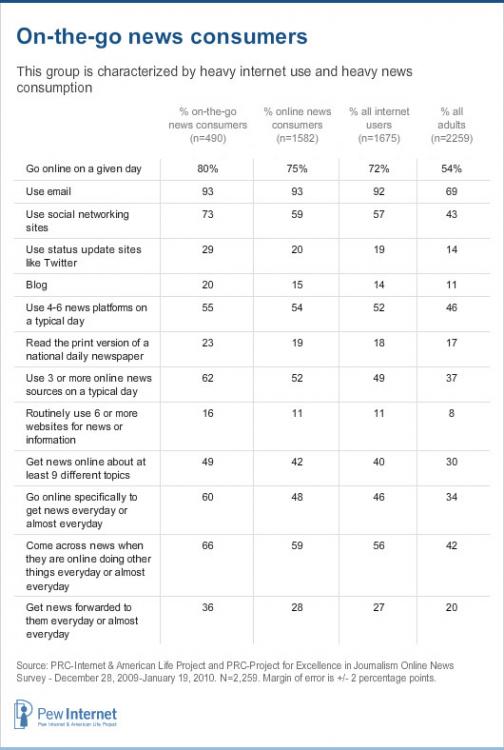 On-the-go news consumers who follow the news at least now and then tend to put the information they find online to practical use.  In this sense, they are the most instrumental news consumers, twice as likely as other regular news consumers to say they need to follow the news for their jobs (30% v. 15%).   They are also slightly more likely than others to say that they find information in the news that improves their lives (66% v. 59%) and that they enjoy talking about the news with their friends and family (77% v. 70%).

It is no surprise that two out of three mobile news consumers (65%) say that it is easier to keep up with news and information today than it was five years ago.  Only 14% of this group believes it is harder to keep up with news today.  On-the-go news consumers are slightly more likely than other adults, however, to see bias in most news sources today (78% v. 69%) and to say the statement “I only follow news about specific topics that interest me” describes them very well (34% v. 26%).

On-the-go news consumers are excited about the advanced features of today’s online news sites, and are consistently more likely than other online news consumers to say features such as interactive material, links to related information, being able to comment on stories, and being able to easily share content are important to them.  They are particularly more likely to value portal news sites and being able to easily share content as the most important features they look for in a news site.

In addition to seeking out advanced features in their news sites, on-the-go consumers are also especially likely to contribute material or actively share it with others. Almost half of on-the-go news consumers (46%) are what we term “news participators”– a group that is examined more fully in Part 6 of this report. News participators engage in one of the following activities:

By comparison, 31% of all other internet users (those who are not on-the-go mobile news consumers) are news participators.

A third of the on-the-go news user group is constantly “on alert” for updates and headlines.

Compared with other on-the-go news consumers, this on-alert group is even more likely to:

Next: News gets personal, social, and participatory
← Prev Page
Page1Page2Page3Page4You are reading page5Page6Page7Page8
Next Page →

Understanding the Participatory News Consumer The news environment in America How people use the news and feel about the news News and the internet
News on the go – wireless access
News gets personal, social, and participatory Methodology Topline