News meets a mixture of social, civic, personally-enriching, and work-related needs in people’s lives. The 93% of Americans who say they follow the news at least occasionally report a variety of reasons for doing so.  Surprisingly, the most popular reasons for following the news do not relate to personal entertainment or professional motivations. Instead, they have to do with social interaction and/or a sense of civic responsibility:

There were not many differences among demographic groups in terms of the functions the news plays in their lives. Women in this news-consumer cohort are more likely than men to say they get information from the news that improved their lives. College graduates are more likely than those who have no college experience to cite all the uses as important to them. And some differences are tied to race and ethnicity: 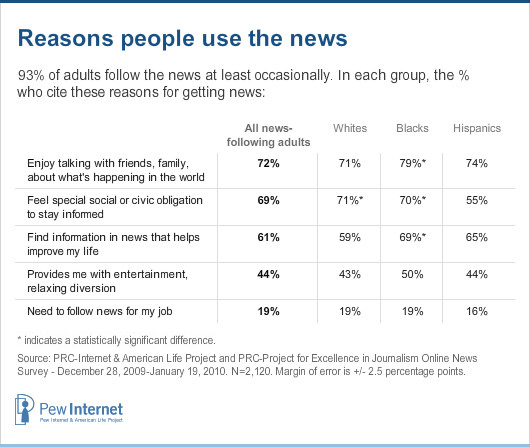 Americans have a love-hate relationship with the new information environment and news organizations’ performances.

We asked respondents to react to several statements about the performances of news organizations and the general information environment, and found several paradoxes.

There is a significant amount of cultural concern expressed in media coverage, scholarly commentary, advertising and marketing professionals who lament message “clutter.” There is also concern among mental health professionals who fret that information overload is a rising problem for Americans. We asked survey respondents a question about how the volume of news might play into this: “Compared with five years ago, do you think it is easier or harder to keep up with news and information today, or is there no real difference compared to five years ago?” Some 55% say it is easier, only 18% say it is harder. One quarter (25%) feel there is no difference between now and five years ago.

Yet even as they say it is easier to keep up with current events, Americans still feel overwhelmed. Some 70% agree with the statement: “The amount of news and information available from different sources today is overwhelming.” One quarter (25%) “completely agree” and another 45% “mostly agree.” Among those most likely to say things are overwhelming are people who use the most media platforms: 73% of those who use 4-6 platforms daily agree it is an overwhelming environment, compared with  55% of those who only use one platform who say they feel that way.

When it comes to the quality of coverage itself, respondents give correspondingly mixed signals. Just under two-thirds (63%) agree with statement that “Major news organizations do a good job covering all of the important news stories and subjects that matter to me.” Yet 72% also back the idea that, “Most news sources today are biased in their coverage.” Some of the explanation for this dichotomy seems to be rooted in the views of partisans. Liberals and Democrats are more likely to say the big news organizations do a good job on subjects that matter to them, while conservatives and Republicans are the group most likely to see coverage as biased. 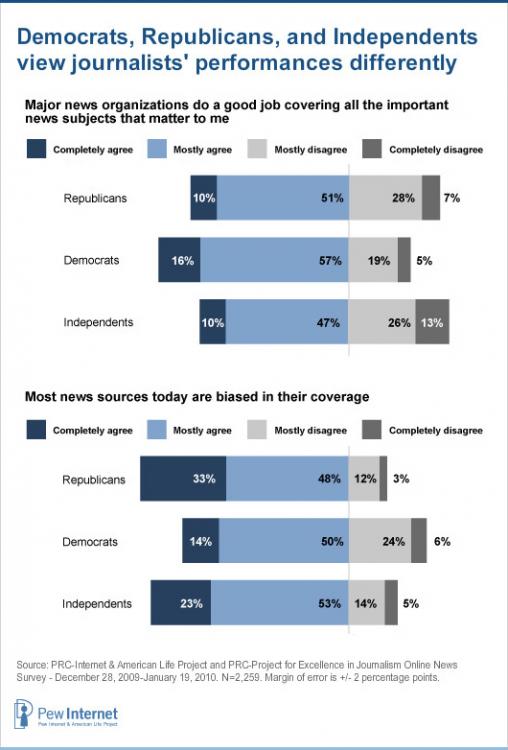 People have different approaches to news: Some like it straight, some like it with a point of view.

The people who are more likely than others to prefer sources with no point of view include: internet users who get news online, whites, and those with higher levels of educational attainment. Those without strong partisan ties (i.e. Independents) or ideological connections (i.e. moderates) are also more likely than partisans to want their news straight.

There is no notable technological element to the preference for news that matches one’s own views – heavy tech users, light tech users and non-tech users are relatively close in their preferences. Broadband and wireless news seekers are no more or less likely than others to want to find news sources that share their viewpoint.

People’s approaches to the news are driven by specific story subjects and a hope for learning by serendipity. Social networks act as alert systems for the most engaged news consumers.

When asked a series of questions about their personal posture towards the news, people express a variety of approaches.  Majorities of American adults identify at least somewhat with each of the three postures we asked about: whether they like to come across news they have not thought about much before; whether they only follow news about specific topics; and whether they rely on people around them to keep them informed. 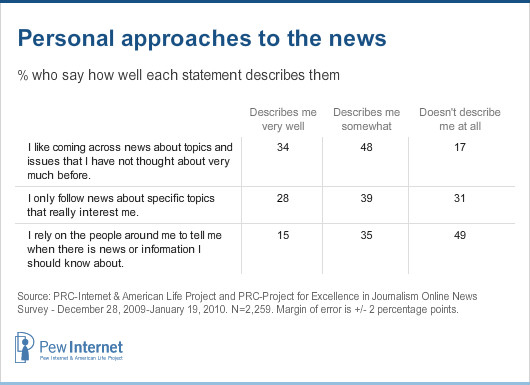 Who are the 34% of respondents who most appreciate serendipitous encounters with news items? They are disproportionately composed of those who are avid news followers, those who use several news media platforms on a typical day (especially the internet), and those with college degrees and higher levels of household income.

How about the 28% who most identify with only following specific news topics? This group is skewed towards those who prefer news sources that share their point of view, men, minorities, and those under age 30. Interestingly, there are no significant differences in the answers to this question that align by ideological viewpoint or party identification.

Next: News and the internet
← Prev Page
Page1Page2You are reading page3Page4Page5Page6Page7Page8
Next Page →

Understanding the Participatory News Consumer The news environment in America
How people use the news and feel about the news
News and the internet News on the go – wireless access News gets personal, social, and participatory Methodology Topline