Home-sharing services are perhaps the classic example of a “sharing economy” platform. These services provide a platform for matching people who are looking for a place to stay for a period of time with other people who have some sort of space available that they are willing to rent. Typically this space is a home, apartment or extra bedroom, but could be anything – from a couch in a common area to a private island.

In many ways, these services function as an internet-enabled version of the boarding houses and bed and breakfasts of an earlier era, albeit on a far grander scale: Airbnb alone represents as much as 17% of available short-term room occupancy in several major cities across the globe, and offers more rooms to the public than many major hotel chains. As a result, questions such as the rights of customers and how these services are regulated have taken on greater salience in recent years. This chapter of the report examines Americans’ usage of and attitudes toward these home-sharing services.

11% of American adults have used an online service such as Airbnb, VRBO or HomeAway to stay overnight in a private residence, but half have never heard of these services before

In total, roughly one-in-ten American adults (11%) say they have stayed overnight in a private residence that they booked using a home-sharing site such as Airbnb, VRBO or HomeAway. Some 34% of Americans are familiar with these services but have not actually used them, and around half (53%) have never heard of these services before.

As was the case with ride-hailing apps (see Chapter 2 of this report), usage and awareness of home-sharing platforms are especially high among college graduates and the relatively affluent –groups that are more likely than less-well-off Americans to take regular trips or vacations in the first place:

Also in contrast with ride-hailing apps, where there were no significant differences across racial or ethnic groups, whites are more likely than blacks to use home-sharing services (13% of whites have done so, vs. 5% of blacks). And while urban and suburban residents use home-sharing at higher rates than rural residents, this difference is much less dramatic than was true of ride-hailing.

One key way in which home-sharing services differ from traditional hotels is that they give users the option of booking a shared space in someone’s home. These shared spaces might range from a separate bedroom in an otherwise-occupied home to a couch in someone’s living room. In fact, services like Couchsurfing promote their “hosts” (in other words, homeowners) as quasi-tour guides who can help guests live like a local while on vacation.

At the same time, not all users who stay in shared spaces are completely unconcerned about doing so: 48% of those who have done this indicate that they worry about staying with someone they have never met before, although 52% say this is not something they worry about. And while men are more likely than women to stay in a shared space, men and women who use home-sharing services in this way express similar levels of concern about staying with a stranger (45% of men who use home-sharing services in this way say this is something they worry about, as do 51% of women).

Most home-sharing users are not following the regulatory debate over these services particularly closely; those who are following this issue tend to not favor hotel or lodging taxes for owners 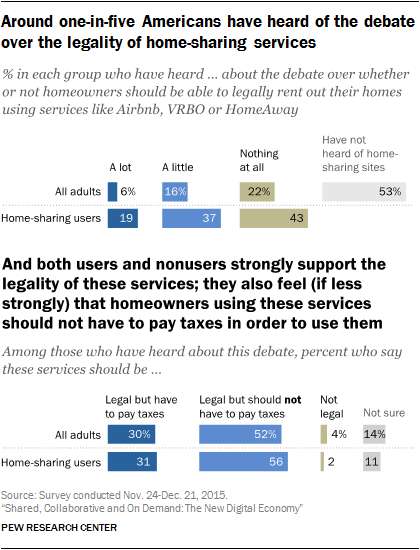 Like ride-hailing apps, home-sharing services have been the subject of much legal and regulatory scrutiny in recent years. Officials in New York City have been in a long-standing battle over the legality of these short-term rental services, with the New York state attorney general estimating that more than 70% of available rentals on these services are in fact illegal – either for failure to collect and report occupancy taxes or for violating the state’s “multiple dwellings” law. And in California, the Santa Monica City Council recently passed a law severely restricting the city’s short-term rental market, while voters in San Francisco recently defeated Proposition F, which would have similarly restricted home-sharing services in that city.

As with ride-hailing apps, the specific regulatory issues at play in these debates vary from city to city. But in most cases, this controversy centers around two major questions: first, whether it should be legal for residents to rent out their homes using these services in the first place; and second, whether they should be legally required to pay some form of hotel or occupancy tax in order to do so. 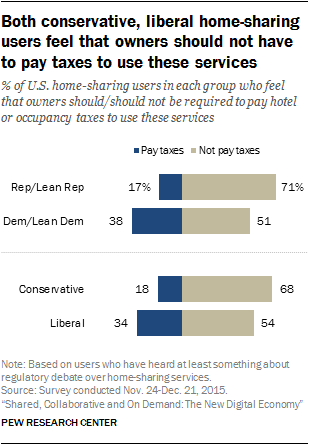 As might be expected, users who are ideologically conservative, along with those who identify with or lean toward the Republican Party, feel overwhelmingly that people renting out their homes on these services should not have to pay any sort of taxes in order to do so. But this view is also held – albeit to a lesser degree – by users of these services who are to the left of the political spectrum. Users who are Democrats or lean Democratic believe (by a 51% to 38% margin) that homeowners who use these services should not have to pay taxes as a condition of doing so, and liberal users take an anti-tax stance by a similar margin (54% to 34%).

Users view home-sharing as a good option for people who travel as a group, as well as for homeowners looking to supplement their income; relatively few view these services as risky to use 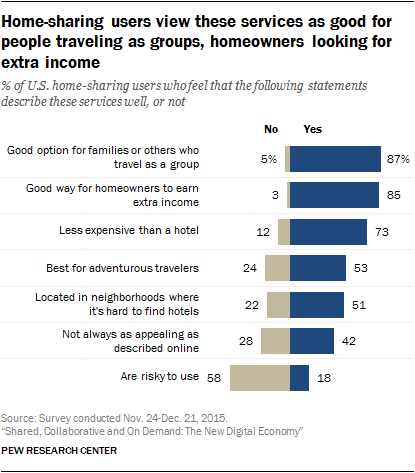 Younger users are especially likely to view home-sharing services as best suited for adventurous travelers – fully 67% of users ages 18-29 feel that this statement describes home-sharing well, compared with 51% of users ages 30-49 and 48% of those age 50 and older. This difference might be related to the fact that younger users are more likely than older adults to use these services to stay in a shared or common space in someone’s home: 66% of home-sharing users who have stayed in this type of shared space feel that these services are best for adventurous travelers.

At the same time, there are other aspects of home-sharing to which older users are particularly responsive. For instance, 92% of users ages 30-49 and 89% of users ages 50-64 believe that home-sharing sites are a good option for families or other groups – substantially higher than the 77% share of younger users who agree.

And as was the case with ride-hailing apps, men and women do not differ dramatically when it comes to their perceptions of home-sharing services and user safety. Male and female users have nearly identical views on whether or not these services are risky to use (17% of men and 18% of women feel that this statement describes these services well), or whether they are best for adventurous travelers (53% of both women and men agree).

Nonusers6 tend to have mixed views about the relative merits of home-sharing services, although a substantial majority of nonusers view these services as a good way for homeowners to make extra income: Fully 65% of nonusers feel that this statement describes home-sharing services well, while just 5% believe this does not describe home-sharing well. The only attributes on which nonusers respond more strongly than users pertains to issues around user safety: nonusers are twice as likely as users to feel that these services are risky to use (36% vs. 18%).

Most users view home-sharing services as software platforms, not hospitality companies, yet expect these services to play a prominent role in managing various aspects of the overall customer experience 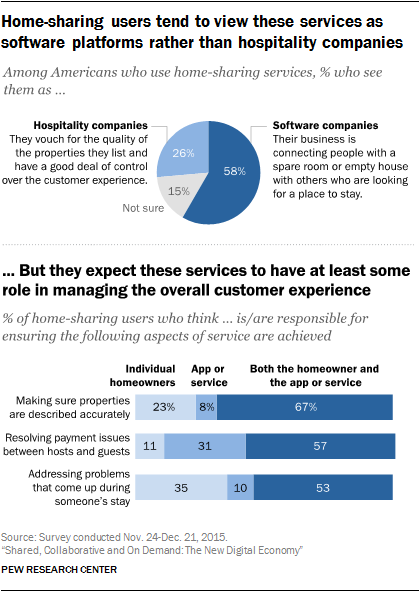 Much like ride-hailing services and traditional taxi services, the way that home-sharing platforms are structured differs dramatically from traditional hotel services. Despite providing listings for a vast number of properties, these services do not own, maintain or otherwise exert physical control over any of the properties involved. As a result, consumers might not always know whom to turn to when problems ranging from payment issues to abusive hosts, injuries or even death emerge during their stay.

In general, users of home-sharing services tend to feel that these services are software platforms rather than traditional hospitality companies. When presented with two alternative descriptions of home-sharing services, some 58% of users indicate that they see them as software companies whose business is simply connecting people with a spare room or empty house with others who are looking for a place to stay; meanwhile, 26% view them as hospitality companies that vouch for the quality of the properties they list and have a good deal of control over the customer experience.7

And as was true in the case of ride-hailing, home-sharing users expect these services to play a relatively substantial role in managing specific aspects of the day-to-day user experience when presented with specific follow-up examples:

Overall, home-sharing users’ views on this question are relatively consistent across various demographic categories, although there are some differences by gender, age and educational attainment. Male home-sharing users are more likely than female users (by a 66% to 53% margin) to view these services as software platforms rather than as hospitality companies. Similarly, 66% of users with a college degree view these services as software platforms, compared with just 46% of users who do not have a college degree. But despite these differences in their abstract views, men and women – as well as those with higher and lower levels of educational attainment – tend to place similar levels of responsibility on these services to help manage different aspects of the customer experience.

In addition to these differences around gender and education, younger users tend to place more responsibility on the app or service when it comes to making sure listed properties are described accurately, and on resolving payment issues between guests and hosts. Some 37% of users ages 18-29 feel that payment issues are solely the responsibility of the app or service (just 22% of users over the age of 50 agree). Meanwhile, 19% of users ages 18-29 feel that these services are obligated to make sure that properties are described accurately (a view that is shared by just 6% of users ages 30-49 and 4% of those 50 and older). 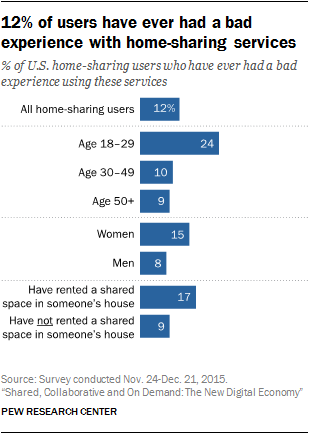