Along with commercialized sharing and on-demand access, collaboration is a third hallmark of the new digital economy. Thanks to a proliferation of open digital platforms, people around the world can join together to take part in a variety of collaborative activities – from creating and circulating government petitions to supporting journalistic endeavors or helping to collect and share information during natural disasters or other major events. The survey focused on one particular type of collaborative online platform: “crowdfunding” sites, which offer anyone the ability to start their own fundraising initiative, that others can contribute to and that supports a specific cause or goal. These findings are discussed in more detail below.

As is true of many of the services discussed in this report, crowdfunding is particularly popular among college graduates and those with relatively high household incomes, and relatively rare among those 65 and older.

The vast majority of crowdfunding users have contributed to a handful of projects, with most making relatively small contributions 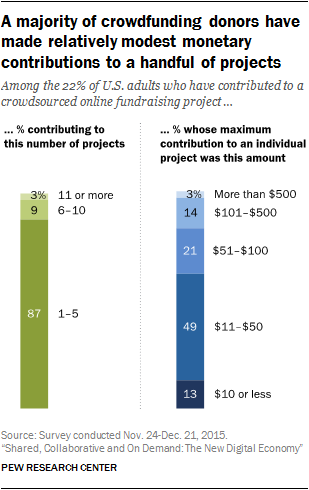 High-tech inventions like the Pebble Time or Coolest Cooler (which have raised $20 million and $13 million in Kickstarter funding, respectively, at the time this report was published) tend to dominate news stories about crowdfunding, as well as the “most-funded projects” lists on many of these platforms. But Americans who use these sites are especially likely to say that they have donated to a project geared toward helping someone in need. Some 68% of crowdfunding users report having contributed to a project to help an individual facing some sort of hardship or financial challenge. 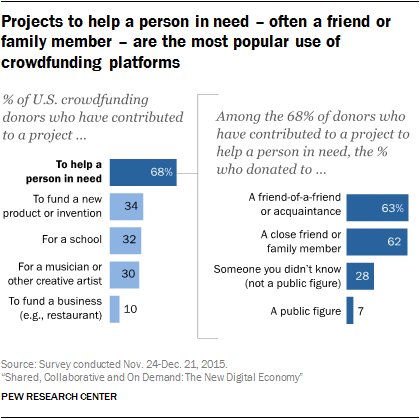 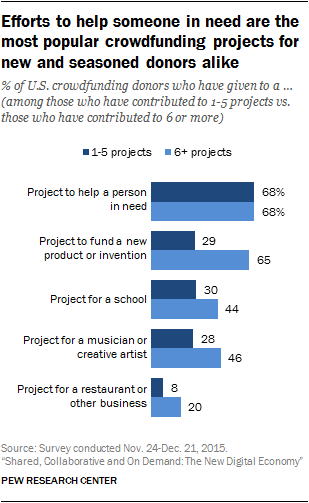 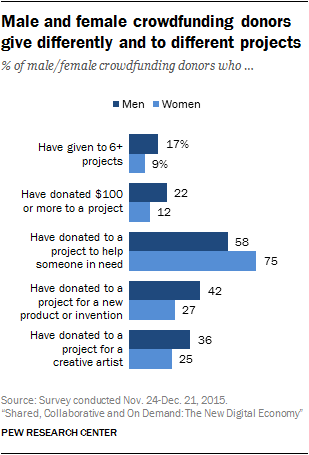 Overall, women are a bit more likely than men to donate to a crowdfunding project of any kind: 24% of women and 19% of men have done this. But among project contributors, men are much more active than women – both in terms of the number and type of projects they fund and the size of the contributions they make.

Looking within the male donor population, younger men in particular stand out for their interest in funding projects relating to new products or inventions. Nearly half of men ages 18-49 who have contributed to a crowdfunding project (48%) have given to a project to fund a new product or invention – a figure that is substantially higher than the share of similarly aged women (31%), older women (20%) or older men (27%) who have done so. By the same token, younger male donors (that is, those ages 18-49) are substantially less likely to have contributed to a project to help someone in need – just 54% have done so, compared with 75% of younger women, 74% of older women and 67% of older men. 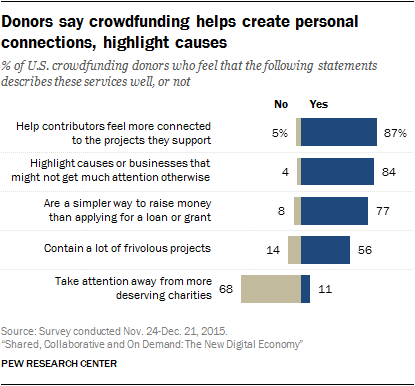 When asked about potential attributes that might describe crowdfunding platforms, users respond especially strongly to the notion that these services foster personal connections between donors and causes, and offer a space to highlight businesses or projects that are not widely known. Fully 87% of crowdfunding donors believe that these platforms help contributors feel more connected to the projects they support (just 5% think this is not the case), while 84% believe that these platforms are a good way to highlight causes that might not get much attention otherwise (4% do not think this describes crowdfunding well). And around three-quarters of users (77%) believe that crowdfunding is a simpler way to raise money than applying for a loan or grant.

In terms of negative perceptions, a slight majority of users (56%) believe that crowdfunding platforms contain a lot of frivolous projects. At the same time, most users don’t think these services take attention away from more-deserving charities – just 11% of users believe that this statement describes crowdfunding services well, while 68% feel it does not describe them well.

Users’ views on the merits of crowdfunding show relatively little variation based on the demographic characteristics of donors, although there are some differences in the attitudes of younger and older donors. Compared with older users, crowdfunding donors under the age of 50 are more likely to feel that these services contain lots of frivolous projects (60% vs. 46%), but also to feel that they are a simpler way to raise money than applying for a grant or loan (80% vs. 70%).

By the same token, crowdfunding users tend to have similar views about these services regardless of the quantity or level of their donations. However, users who have donated more than $100 to an individual project are especially likely to indicate that these services are a good way to highlight lesser-known causes or businesses – 94% of these donors believe this statement describes these services well.

3% of American adults have created their own online fundraising project

The share of Americans who created a fundraising project of their own using a crowdfunding platform is relatively small, with 3% saying they have done so. Many of these project creators are themselves donors to other projects; fully 72% of these project creators have made their own contributions to other people’s projects (looked at a different way, 10% of crowdfunding donors have also created a project of their own).

Creating one’s own online fundraising project is a relatively rare occurrence across a range of demographic groups, but certain groups are a bit more likely to do so than others. In particular, some 6% of women ages 18-49 have created their own online fundraising project, compared with 3% of similarly aged men and just 1% of Americans ages 50 and older (regardless of gender).

‘In their own words’ responses from project creators

In addition to asking whether they had created a project of their own, the survey also asked respondents to describe a specific project they had created, including the goals of the project and whether or not they reached their monetary objective. A selection of their responses is included below.

Many responses mentioned starting a project in order to pay for medical, veterinary or other personal expenses (either for themselves or for someone else). In a number of instances these projects were designed to appeal to a relatively small group of friends and family, rather than to a wider audience:

I held a fundraiser for a friend who was diagnosed with stage 4 cancer. We raised over $5,000 in one month. We exceeded our goal.

“I have to see a specialist in Florida from Maryland. There were expensive tests that I had to pay out of pocket, traveling expenses and 10 days hotel costs. Yes, I met my goal. Support was mostly from family & friends.”

“I held a fundraiser for a friend who was diagnosed with stage 4 cancer. We raised over $5,000 in one month. We exceeded our goal.”

“I’m a teacher and used GoFundMe to get updated technology (Chromebooks) for my classroom. I met the goal relatively quickly through donations by parents and other community members.”

“To raise money to help my mother in law pay for a seeing-eye dog. We met the goal.”

“A good friend had just gotten engaged and was moving to live with his fiancée. He couldn’t afford to go on our annual guy’s boat trip so we all chipped in via GoFundMe to pay for his trip and make it his bachelor party.”

“I created a profile on GoFundMe today to help me pay for a trip around Europe this upcoming December. I don’t have enough to pay for all of my hostels and thought I could give this a try.”

“To help my family get a vehicle because ours died and we need one for my son who has autism and other medical problems. No we did not meet our goal.”

It was to benefit feminist conference organized by a volunteer collective. We raised several thousand dollars. It was successful.

“My band raised money to record an album, with varying rewards for donors. We did meet our goal, and it was great!”

“My husband and I run a recording studio. We have done two Kickstarters to raise money for artists to record albums. First was [$5,000] and was not successful. The second was [$8,000] and was successful. It is dependent on how much effort the artist invests in the project as well as the size and activity of their social circles.”

“I’ve run several projects. Each was a short-run collection of memorabilia of interest to fans of H.P. Lovecraft. All three projects met their funding goals.”

“I work in nonprofit development and marketing. It was for a few clients of mine and it took about 30 minutes to enter all of the content. The goals were between $1,000 – $10,000. Some were met and others were not for a variety of reasons.”

“It was to benefit feminist conference organized by a volunteer collective. We raised several thousand dollars. It was successful.”

“To fund a business startup idea based out of a college project. We were fully funded and ran the business for the semester.”

Some noted that even though they didn’t meet their initial goal, they still thought of the experience as a positive one:

I raised $5,000 for the earthquake victims of Nepal. No, I did not reach my goal but was able to provide money to five different ministries including an orphanage.

“I am a foster parent and was raising money for a larger vehicle to support our family. I did not meet the goal, but did get quite a bit of money. Around $3,000.”

“I raised $5,000 for the earthquake victims of Nepal. No, I did not reach my goal but was able to provide money to five different ministries including an orphanage.”

“The goal was to fund a summer intensive for my daughter. It was a good way to get exposure but for the most part it was family who contributed and we didn’t completely meet our goal. We came close enough though and did much better than when we held fundraisers locally where there was a lot of labor and expense going in with a less than stellar payoff. If I were to do it again, I think I’d want to not just ask for money but have the ability to give something back to the donors for helping us (some kind of reciprocity) … it may have created happier donors and made me feel like I did something tangible to say thank you.”

But others expressed resignation at their failure to reach even relatively modest goals:

My grandfather passed away, I needed help with funeral. I didn’t earn a dime. This was a waste of my time and hope.

“I wanted help getting down to CA to be with my dog when she passed away but I had no means to get there myself. My goal was only $375 but I did not get a single donation. Therefore I did not reach my goal.”

“My grandfather passed away, I needed help with funeral. I didn’t earn a dime. This was a waste of my time and hope.”

“My sister died and we didn’t have enough money for a grave plot and headstone near my mom and grandparents at forest lawn but I didn’t get any contributors.”

“Needed money for a used car. Started a GoFundMe account. People made fun of me on GoFundMe. I had to wait months to save money like most people do. I did not get any money.”

Next: 5. Other shared and on-demand services
← Prev Page
Page1Page2Page3Page4You are reading page5Page6Page7Page8
Next Page →