In addition to asking a series of in-depth questions about home-sharing services, ride-hailing apps and crowdfunding sites, the survey also measured how many Americans have used a number of other shared and on-demand services. This chapter of the report examines the usage and demographics of these other commercial online platforms. 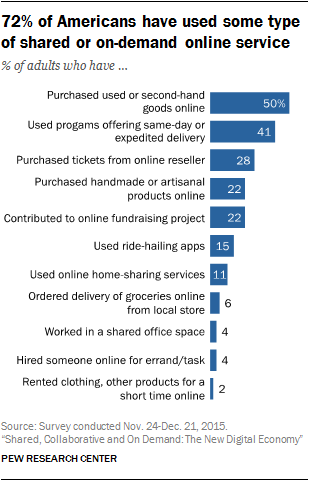 Several of these services are relatively common, if far from universal. In general, services in this category are those that have been in existence for a number of years, as well as those that are widely available regardless of geographic location:

On the other hand, several of these services are used by a relatively small minority of Americans. Often these services are new entrants to the market, or those whose availability is more geographically constrained than those listed above:

As noted in previous chapters of this report, 22% of Americans have contributed to an online fundraising project on a site like Kickstarter or GoFundMe; 15% have used ride-hailing apps like Uber or Lyft; and 11% have used online home-sharing services such as Airbnb or HomeAway.

Exposure to the shared and on-demand economy varies greatly within the population: 21% of Americans have used four or more of these services, but 28% have not used any of them

Taken together, roughly three-quarters (72%) of American adults have used at least one of these 11 digital commerce platforms. But although a substantial majority of Americans have at least some connection with the shared and on-demand economy, the extent to which they incorporate these services into their daily lives varies widely across the population.

At one end of the spectrum, roughly half of the public has only modest (if any) exposure to the shared or on-demand economy. Some 28% of Americans have not used any of these services, and 20% have used just one of them (the typical – median – American reports using just two of these 11 services). At the same time, around one-in-five Americans (21%) have used four or more of these 11 services, with 7% indicating that they have used six or more.

College graduates, those with high household incomes, and those under the age of 45 are especially likely to incorporate shared and on-demand services into their lives

Those with relatively high household incomes – 41% of Americans with an annual household income of $100,000 or more have used four or more of these services, three times the proportion among those from households earning less than $30,000 annually (13%).

Those under the age of 45 – Exposure to these shared and on-demand services begins to drop off rapidly starting at around age 45. Around one-third of those ages 18-44 have used four or more of these services, and relatively few members of these younger age cohorts have no exposure to these services at all. By contrast, 44% of Americans ages 50 and older (and 56% of those 65 and older) have not used any of these 11 platforms.

But while some services are widely popular among users of many other different types of services, others tend to cluster together. In other words, these services have a great deal of reciprocity with each other, but not necessarily with the other services. Four services in particular stand out as the “leading edge” applications of the shared and on-demand economy: online grocery delivery services, shared or “co-located” office spaces, online task marketplaces, and short-term clothing or product rental platforms.

Each of these four services is relatively rare within the population as a whole, but vastly more common among Americans who use one or more of these other four services. For instance, among the public as a whole just 6% of Americans have used online grocery delivery services, while 4% have worked in a short-term shared office space and just 2% have rented clothing or other products for a short period of time online. But among the small subset of Americans who have hired someone online to do a task or household errand for them, 40% have used online grocery delivery services (nearly seven times the figure for the general population); 34% have used a short-term shared office space (roughly eight times the figure for Americans as a whole); and 24% have used short-term product rental services (12 times the rate for the general public). All of these four services have a similar level of mutual “reciprocity” when compared with the others. 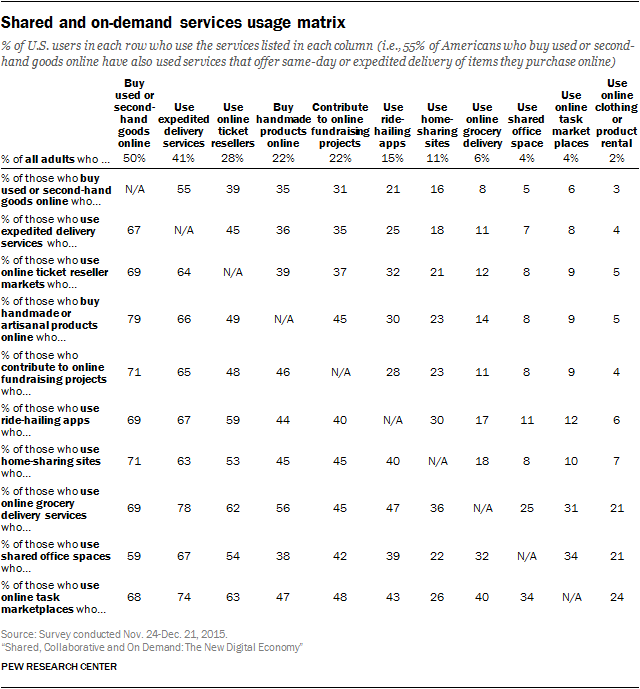 Half (50%) of U.S. adults say they have bought used or second-hand goods on websites like eBay or Craigslist. As with many tech-related products and activities, usage of these sites varies by age. Americans under the age of 50 are roughly twice as likely as those 50 and older to buy second-hand products online (63% vs. 34%). This behavior is also comparatively uncommon among blacks, those who have not attended college and those with relatively low household incomes.

On the other hand, rural residents are just as likely as those living in urban or suburban areas to report buying second-hand goods online.

Some 41% of Americans say they have used services that offer same-day or expedited delivery for their online purchases. As with many of these services, use of these services is highest among younger adults, college graduates and those with relatively high household incomes. For example, 57% of those with college degrees have used these types of services, compared with 26% of those with a high school diploma or less.

Some 28% of U.S. adults report they have purchased a ticket to a sporting or entertainment event from an online ticket reseller like StubHub or SeatGeek. This activity is fairly strongly correlated with household income and educational attainment: 44% of those living in households earning $75,000 or more a year and 44% of college graduates have purchased tickets via an online ticket reseller, but only 17% of adults from households earning less than $30,000 annually and 15% of those without college experience have done so.

Websites like Etsy serve as a virtual marketplace, allowing entrepreneurs and consumers to sell and buy hand-crafted goods that were once reserved for “real-world” markets and trade shows.

Some 22% of Americans have bought hand-crafted or artisanal products online, and this behavior is especially common among younger adults (especially those under the age of 50), college graduates and those with relatively high household incomes.

In contrast to many of the services discussed in this report, women are substantially more likely than men to engage in this behavior: Some 29% of women have purchased hand-crafted goods online, nearly double the figure for men (15%).

Just 6% of U.S. adults say that they ever order groceries online from a local store and have them delivered to their home using a service like Instacart, Peapod or FreshDirect.

Like many other facets of the sharing economy, use of these services is most prevalent among younger Americans, college graduates and those with relatively high household incomes.

Much like ride-hailing, online grocery delivery services are more prevalent among urban and suburban residents than those living in rural areas – even across income and education levels. For example, just 2% of rural residents whose annual household income is $75,000 or more have used these services, compared with 7% of urban residents earning less than $30,000 a year.

A number of online services (such as TaskRabbit, Fiverr and Amazon’s Mechanical Turk) allow users to outsource a variety of daily tasks, errands and small jobs to independent “gig” workers. At the moment these services are a relatively niche behavior, as just 4% of U.S. adults say they have hired someone online to do a task or errand.

In general, this behavior is relatively rare across a variety of demographic groups. The biggest dividing line pertains to age: Americans under the age of 50 are three times as likely to use task marketplaces as are those ages 50 and older (6% vs. 2%).

For freelancers and other workers who have the ability to work anywhere thanks to digital technology, so-called co-working spaces can provide a home base or connection with a broader community of workers. Overall, 4% of Americans have ever worked in a shared office space where people can pay to use an office or work area for a period of time. Although a relatively niche behavior for most demographic groups, Americans under the age of 50 are significantly more likely to have done this than those ages 50 and older (7% vs. 2%).

Just 2% of U.S. adults say they have rented clothing or other products from an online service like Rent the Runway. Younger adults are more likely to have used this type of service than older adults: 5% of 18- to 29-year-olds say they have done so, compared with fewer than 1% of adults 65 years of age and older. In contrast to most of these services, lower-income Americans are more likely than those from higher income brackets to use these services. Still, a vast majority of all major demographic groups have not used an online rental services for clothing items.