Across the board, technology users are more likely than non users to be involved in almost all the kinds of groups in the Pew Internet survey. Moreover, the internet is now deeply embedded in group activities and in how people create, join, participate in, and sustain groups. It is also implicated in the fluidity of group involvement as people sample groups, lurk in groups, and leave groups if they do not like the tone of group activity or the direction of the group.

In this survey, 77% of adults reported being internet users; 81% said they had cell phones; and 59% said they connect to the internet wirelessly either through their laptop computer or through their smart phone. In the roster of groups we queried, available in the table linked to below, tech users dominated almost all the kinds of groups queried except those that are oriented towards older adults or based in rural communities.

The proportion of American adults in each tech user group (those who use the internet, those who connect to the internet wirelessly, cell phone users, etc.) who are active in various organizations. From The Social Side of the Internet.

How groups use the internet

As we noted, 75% of American adults are active in at least one group. This next segment of the report deals with that portion of the population: the Americans who participate in groups.

For them, the internet has become as important as the phone and in-person meetings in holding groups together and keeping members informed of group news and activities. Some 77% of people report that the groups in which they are active organize activities and communicate with members via email and 69% report their organizations have a website. This is comparable to their reports about in-person meetings – 76% of them say their groups have regular gatherings – and phone organizing, which 70% report is a core activity of their group.

In addition, 59% of group activists said their organizations send out printed newsletters and 40% host online discussions or message boards.

As a rule, the younger a group member is, the more likely she is to report that her groups use electronic communication. For instance, 50% of younger adults say their groups host online discussion groups or message boards, compared with 41% of those ages 50-64 who report that.

At the same time, those with higher household income and higher levels of education are also more likely than others to report that their groups rely on new media techniques for communication and information dissemination. For instance, 90% of those with college degrees say their groups use email to organize and communicate, compared with 69% of those whose schooling ended with a high school diploma. When it comes to having websites, 83% of those who live in households earning $75,000 and above say their groups have them, compared with 62% of those who live in households earning less than $50,000.

How people use basic internet activities to connect, contribute, and create groups

The internet is also a key tool for mobilization and expansion of groups. More than half of all internet users – 57% – say they have been invited online and through email to join a social, civic, professional, or religious group. Some 38% of the online Americans who are active in groups say they have used the internet or email invite others to join groups. Younger adults, those ages 18-29 are the most likely to have on the creation end of those invitations and the receiving end. 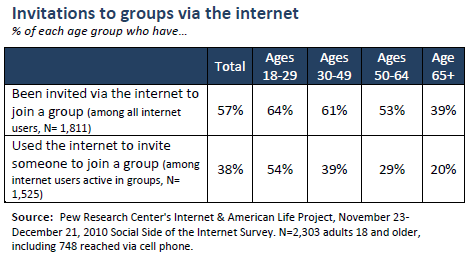 Some groups come and go pretty quickly online. One of the hallmarks of the digital age is that groups can form and disband easily and it turns out that 9% of internet users say they have been part of a group that formed online and lasted less than a year. As in many aspects of online life, this phenomenon most frequently occurs among younger adults: 14% of the internet users between the ages of 18-29 say they have been part of a short-lived group that started online vs. 6% of the internet users who are over age 50. Of course, there are several reasons why the group might not have lasted and we did not ask the particular reason the group disbanded.

New communications patterns have now been woven into group life. The activity at organizations and informal groups is increasingly taking place in social networking spaces like Facebook, on Twitter, in blogging, and in cell phone texting. This section will report on several subpopulations and their group activities, which tend to be more intense and more engaged than other technology users. 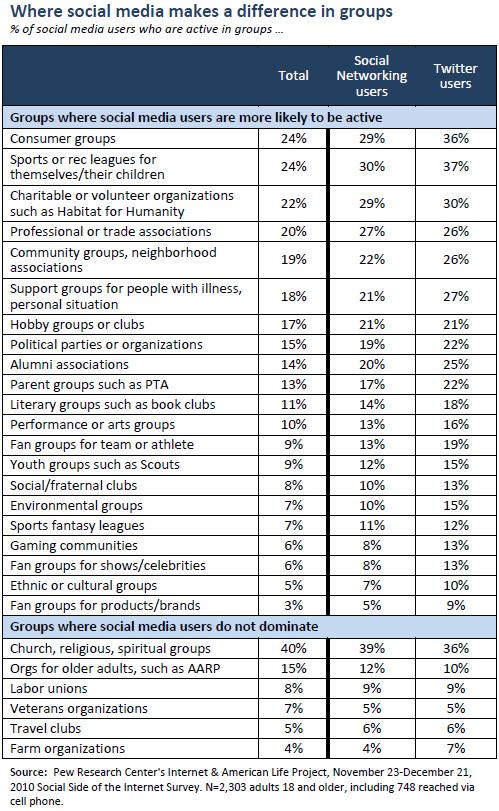 Social media and other newer digital activities are also becoming part of the communications and dissemination toolkit for groups:

The people most likely to report their groups are keen on new digital technologies are younger adults (those ages 18-29) and those who have higher incomes and educational levels. The table below illustrates the point: 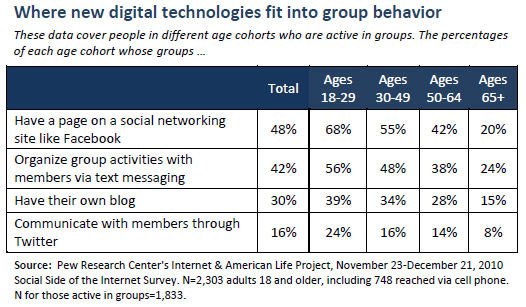 Not only are groups using social media to communicate and mobilize members, but the members themselves are often active in using social media to connect with the group and evangelize for the group with others: Some 65% of those who are social network site users say they read updates and messages on these sites about the groups in which they are active and 30% say they have posted news about their groups on their SNS page. The numbers are similar when it comes to Twitter users: 63% of the Twitter users who are active in groups say they read updates and posts on Twitter about their groups, and 21% say they post news on Twitter about their groups.

Some 45% of the texters who are active in groups say they send and receive texts with other group members and leaders.

Again, younger group members are the most likely to have used technology in these ways. 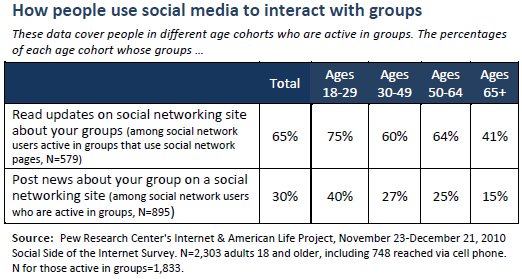 Compared with other technology users, those who use social network sites like Facebook and Twitter users are considerably more likely to be engaged with group creation and maintenance. Half of the social network users who are active in groups (48%) have used the internet to invite someone to join a group vs. 21% of the non-SNS users who have done this. Fully 65% of the Twitter users who are active in groups have issued invitations via the internet to others vs. 34% of the non-Twitter users who have done that.

At least some of the groups that these social media users joined were the temporary sort. Some 11% of SNS users and 16% of Twitter users said they had been part of a group that had formed online and lasted less than a year, a higher incidence than for internet users who do not participate in those social media activities.

With all these group invitations being passed along, it is clear there are times when people feel a social push to join groups. Some 16% of adults say they felt obligated to join a group because someone they know invited them. Here are some of the people for whom this is particularly the case:

Next: Section 4: The impact of the internet on group activities
← Prev Page
Page1Page2Page3You are reading page4Page5Page6
Next Page →

The Social Side of the Internet Section 1: The state of groups and voluntary organizations in America Section 2: Joining, participating in and leaving groups
Section 3: How the internet is used in groups – and the rise of social media and texting in group activities
Group participation and technologyHow groups use the internetHow people use basic internet activities to connect, contribute, and create groupsThe growing role of social media and texting in the life of groups and organizationsSocial obligation and groups
Section 4: The impact of the internet on group activities Methodology