Overview: The most popular types of groups and organizations

The status of Americans’ social ties and the vigor of their communities have drawn considerable attention in recent years, much of it focused on the degree to which the internet, cell phones, and other information and communication devices are affecting Americans’ social lives.

These figures about group participants come from those who said they belonged to at least one of 27 different kinds of groups that we queried in the survey. If a person said “yes” to being active in at least one group, then she was counted among the 75% of Americans who are active in groups. In fact, the average American adult is active in 3.51 groups of the various types we queried. Some 14% of adults belong to at least 8 types of groups. In addition, the average person spends 6.54 hours per week in group activities.

Church organizations and spiritual groups are by far the most popular groups among Americans: 40% of adults say they are active in such groups. The next most popular groups are those related to sports and recreation leagues (in which 24% of adults are active), consumer groups such as the Automobile Association of America (AAA) or coupon-sharing groups (24%), charitable or volunteer organizations (22%), and professional or trade associations of people in similar occupations (20%). Here is the full picture of group participation that was captured in this survey:

The traits of group members

In a notable number of cases, demography is destiny when it comes to group participation in America. There is considerable variance in group membership depending on gender, age, racial and ethnic groups, and socio-economic status. For instance, women are more likely than men to be active in church groups, consumer groups, support groups, parent groups, literacy groups and performance groups among other things. At the same time, men are more likely than women to be connected to groups involving sports or sports fan activities, veterans, and gaming groups. 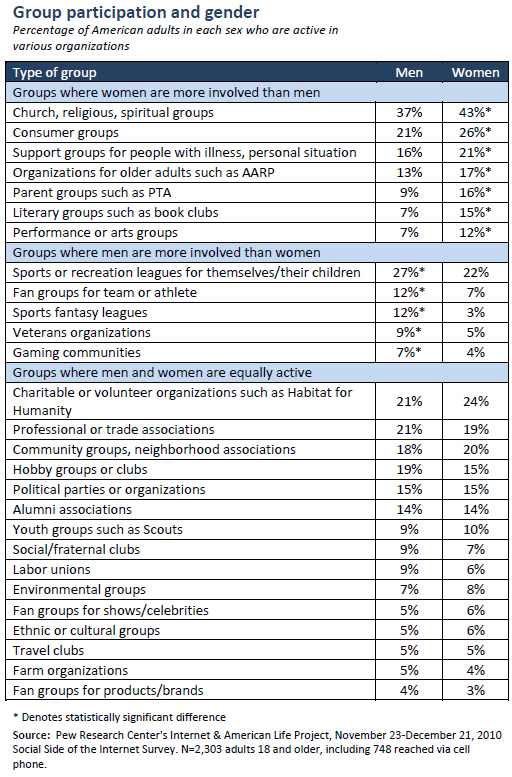 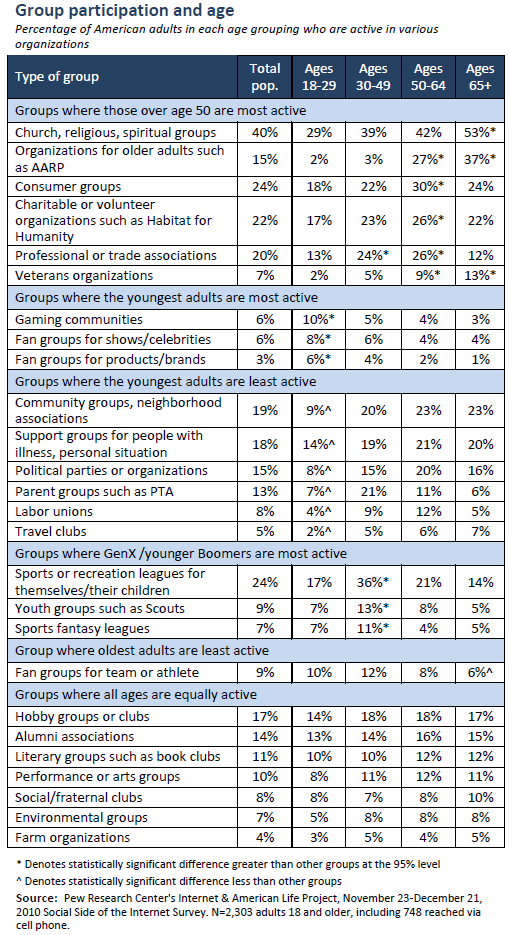 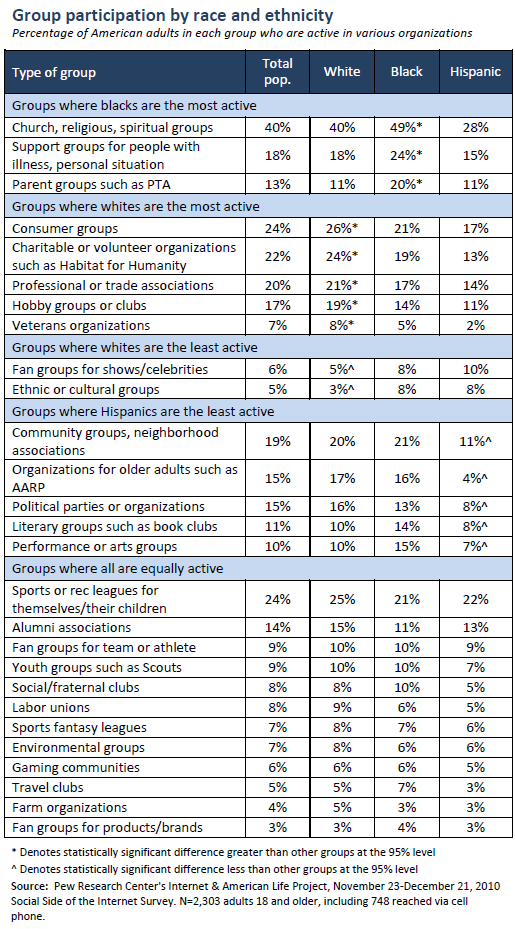 In addition to those factors, socio-economic status is strongly tied to group participation. Those with college degrees are substantially more likely than others to be participants in all the groups that were queried in this survey, except support groups, organizations for older adults, fan groups of athletes or teams, labor unions, sports fantasy leagues, gaming communities, and veterans groups. The same pattern held for household income. The higher the income the more likely someone was to be involved with most groups, except the groups cited above.

In some instances, the type of community in which respondents lived was tied to the likelihood of their involvement with certain kinds of groups. For example, suburban dwellers were more likely than others to be active in sports leagues for themselves or their children, consumer groups, professional or trade associations, community associations, hobby groups, political organizations, alumni associations, parent groups, sports fantasy leagues. Those who live in large cities were more likely than others to be in consumer groups, literary discussion groups, gaming communities, fan groups, and ethnic/cultural groups. Those who live in rural areas were most likely to be involved with church and spiritual groups, organizations for older adults like AARP, veterans groups, and farm organizations.

The special role of personal efficacy and social trust

Two of the main drivers of activism in groups appear to be people’s sense of their own ability to make a difference and their sense of trust in others. We did not probe either issue in great depth in this survey, but we did take simple readings. On the issue of personal efficacy, we asked respondents, “Overall, how much impact do you think people like you can have in making your community a better place to live — a big impact, a moderate impact, a small impact, or no impact at all?” Some 30% said they felt they can have a big impact; 39% said they can have a moderate impact; 22% said they have a small impact; and 10% said they felt they have no impact.

Clearly, a personal sense that one can have impact will likely propel some people into group activities aimed at personal fulfillment and civic engagement. In addition, the degree to which people are interested in others, can work with others, and can find benefits in social connection could also influence their willingness to become active in groups.

Why people do not participate in groups

A quarter of Americans do not belong to any of the kinds of groups that Pew Internet probed in this survey. We asked those respondents some questions about the reasons they might not be active and the most frequently cited reasons were time pressures (cited by 43% of non-group members as a major reason for not being active) and lack of interest in these kinds of organizations (cited by 25% as a major reason for not being activity). Others said health issues, lack of access to the internet, and their view that they cannot find groups or organizations that share their interests. 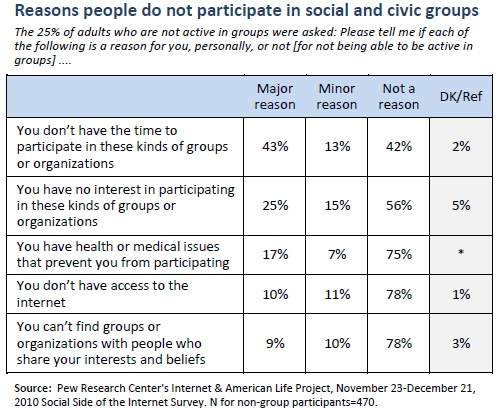 Next: Section 2: Joining, participating in and leaving groups
← Prev Page
Page1You are reading page2Page3Page4Page5Page6
Next Page →

The Social Side of the Internet
Section 1: The state of groups and voluntary organizations in America
Overview: The most popular types of groups and organizationsThe traits of group membersThe special role of personal efficacy and social trustWhy people do not participate in groups
Section 2: Joining, participating in and leaving groups Section 3: How the internet is used in groups – and the rise of social media and texting in group activities Section 4: The impact of the internet on group activities Methodology