Those who are active members in groups – 75% of Americans – were asked about three potential reasons for being active in social or civic groups. Some 59% of adults cite this as the major reason: accomplishing things as part of a group that they could not accomplish on their own. An almost equal number (57%) say that keeping up with news and information about subjects that matter to them is a major reason.  Fewer adults cite meeting new people as a major reason to participate in social and civic groups. 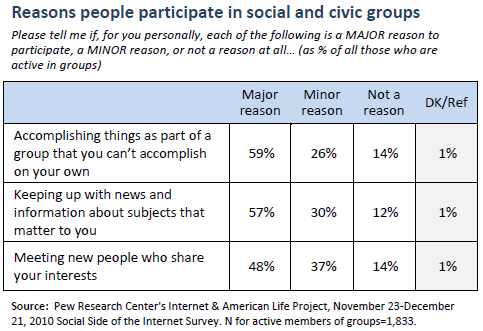 Reasons for participating in groups vary across age groups.  The youngest adults, age 18-29, are much more likely than older adults to say that meeting new people is a major reason they participate in these kinds of groups.  Six in ten young adults (59%) say meeting new people is a major reason for them, making it equally important as keeping up with information (58%) and almost as important as accomplishing things as part of a group that they cannot accomplish on their own (65%).  In contrast, about one in five adults age 65 and older (18%) say meeting people who share their interests is not a reason at all for them to participate in groups.

Both African-American adults (70%) and Hispanic adults (67%) are significantly more likely than white adults (54%) to say that keeping with news and information that matters to them is a major reason to participate.  In fact, for minority adults, this reason ranks higher than accomplishing things as part of a group or meeting new people. 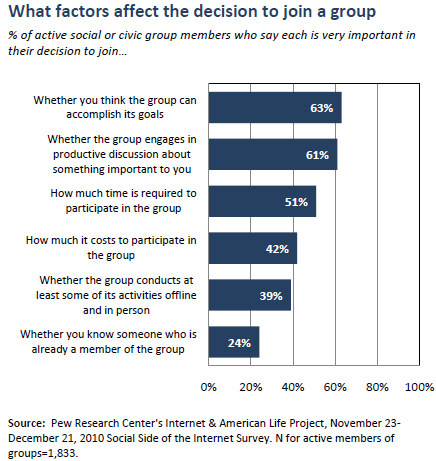 An individual’s reasons for joining a social or civic group vary somewhat by both race and gender.  African-American adults, for instance, are more likely than white adults to say that the group’s ability to accomplish its goals (72% v. 60%), whether the group engages in productive discussions (71% v. 59%) and the costs of participation (50% v. 40%) are very important factors in their decision to join a group.  In addition, more women than men say that productive discussions (64% v. 58%), the costs of participation (47% v. 37%) and the time required to participate (56% v. 44%) are very important in their decision.

The roles people play in groups

Asked how they have been active in their groups in the 30 days prior to the survey, two-thirds of group members say they had attended a meeting or event for a group they are active in. Another six in ten reported volunteering their time to a group in the past month.  Only half as many group members (32%) reported taking a leadership role in a group they are active in during that same time period.  It should be noted that the survey took place in late November and December, a time of year in which many people are particularly active in social and civic groups. 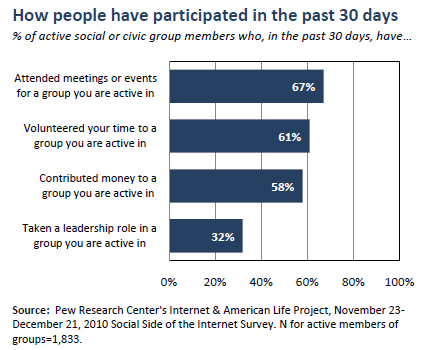 Participation of all types within social and civic groups is highest among adults with a college education and those with the highest incomes.   As the table below indicates, taking a leadership role is more than twice as common among college graduates (41%) as it is among those with less than a high school education (17%). 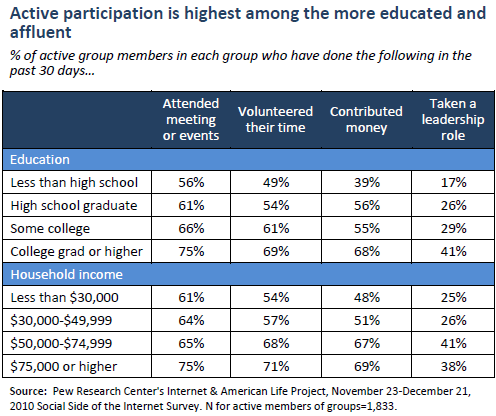 How group members feel about their group’s activities

Adults currently active in social or civic groups were asked about their groups’ accomplishments and achievements over the past 12 months.  Overall, six in ten (60%) reported feeling really proud of a group they are active in because of something it achieved or a positive difference it had made over that time period.   Fewer (45%) felt they had accomplished something in a group they belonged to that they would not have been able to achieve on their own.  And fully one in five active group members (19%) said that at some point in the past 12 months they had felt really disappointed in a group they belonged to because it failed to achieve its goals or lacked purpose.

As was the case with active participation, education and income influence are related to one’s feelings about their group activities.  Adults with more education and higher incomes are more likely to be both proud of a group’s achievements and more likely to feel they had accomplished something through a group that would not have been possible on their own.  However, adults with the highest incomes are also the most likely to be disappointed in a group they belong to. 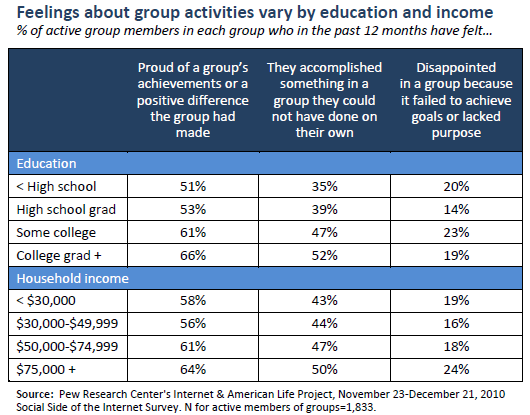 Among all adults, one in ten (10%) had left a social or civic group or organization in the 12 months prior to the survey.  Asked why they had left, the most commonly cited reason was a lack of group leadership, followed closely by having simply lost interest in the goals or purposes of the group.  The least cited reason of those asked about was having too much responsibility. 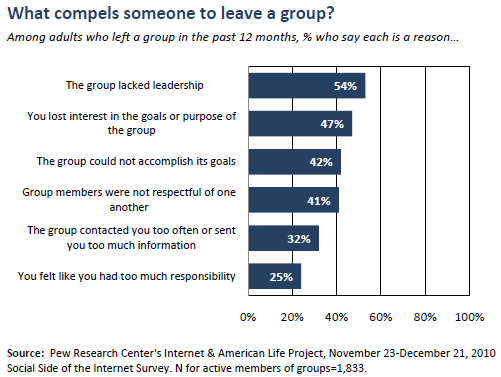 An individual’s reasons for leaving a group seem fairly universal; there are virtually no differences across demographic subgroups in terms of why one decides to leave a social or civic group.

Internet users are more active participants in their groups than other adults, and are more likely to feel pride and a sense of accomplishment 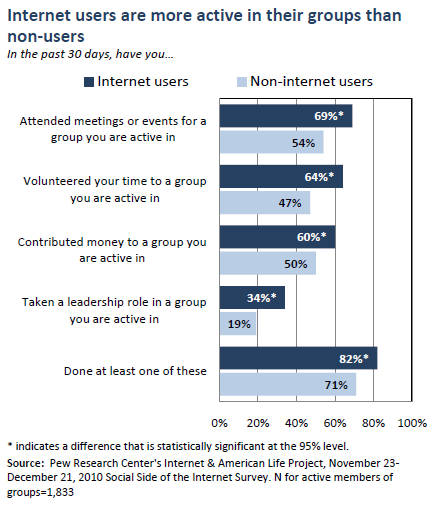 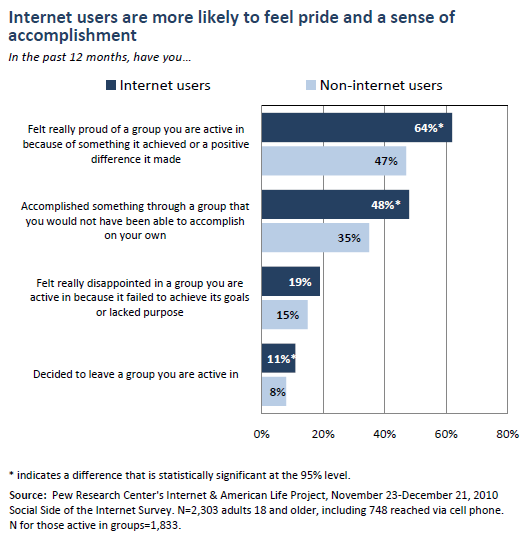 Overall, adults who use the internet and those who do not are equally likely to say that meeting new people and keeping up with news and information about subjects that matter to them are major reasons they participate in the social and civic groups to which they belong.  However, internet users are more likely to say that accomplishing something as part of a group that they cannot accomplish on their own is a major reason they participate (62% of internet users say this, compared with 48% of offline adults).

In weighing the decision to join a particular group, adults who use the internet and those who do not are equally likely to cite time and cost commitments, whether they think the group can achieve its goals, and whether they know someone who is already a member of the group as very important factors in their decision to join.  And surprisingly, non-internet users are no more likely than internet users to say that having at least some group activity offline and in person is very important to them.   However, adults who use the internet are more likely than those who are offline to say that having productive discussions about topics that matter to them is key in their decision about whether to join a group (63% v. 49% say it is very important).

Next: Section 3: How the internet is used in groups – and the rise of social media and texting in group activities
← Prev Page
Page1Page2You are reading page3Page4Page5Page6
Next Page →

The Social Side of the Internet Section 1: The state of groups and voluntary organizations in America
Section 2: Joining, participating in and leaving groups
Why people participateWhat makes people join particular groupsThe roles people play in groupsHow group members feel about their group’s activitiesWhy people leave groupsInternet users are more active participants in their groups than other adults, and are more likely to feel pride and a sense of accomplishment
Section 3: How the internet is used in groups – and the rise of social media and texting in group activities Section 4: The impact of the internet on group activities Methodology