The internet is at the center of the story of how people’s relationship to news is changing. Six in ten Americans (59%) get news from a combination of online and offline sources on a typical day, and the internet is now the third most popular news platform, behind local television news and national television news.

The process Americans use to get news is based on foraging and opportunism. They seem to access news when the spirit moves them or they have a chance to check up on headlines. At the same time, gathering the news is not entirely an open-ended exploration for consumers, even online where there are limitless possibilities for exploring news. While online, most people say they use between two and five online news sources and 65% say they do not have a single favorite website for news.  Some 21% say they routinely rely on just one site for their news and information.

In this new multi-platform media environment, people’s relationship to news is becoming portable, personalized, and participatory. These new metrics stand out:

To a great extent, people’s experience of news, especially on the internet, is becoming a shared social experience as people swap links in emails, post news stories on their social networking site feeds, highlight news stories in their Tweets, and haggle over the meaning of events in discussion threads. For instance, more than 8 in 10 online news consumers get or share links in emails.

The rise of the internet as a news platform has been an integral part of these changes. This report discusses two significant technological trends that have influences news consumption behavior: First, the advent of social media like social networking sites and blogs has helped the news become a social experience in fresh ways for consumers. People use their social networks and social networking technology to filter, assess, and react to news. Second, the ascent of mobile connectivity via smart phones has turned news gathering and news awareness into an anytime, anywhere affair for a segment of avid news watchers.

The internet has surpassed newspapers and radio in popularity as a news platform on a typical day and now ranks just behind TV.

More than half of American adults (56%) say they follow the news “all or most of the time,” and another quarter (25%) follow the news at least “some of the time.”  Asked specifically about their news habits on “a typical day,” the results are striking: 99% of American adults say that on a typical day, they get news from at least one of these media platforms: a local or national print newspaper, a local or national television news broadcast, radio, or the internet.1

Only local and national TV news, the latter if you combine cable and network, are more popular platforms than the internet for news. And most Americans use a combination of both online and offline sources. On a typical day:

Americans today routinely get their news from multiple sources and a mix of platforms. Nine in ten American adults (92%) get news from multiple platforms on a typical day, with half of those using four to six platforms daily. Fully 59% get news from a combination of online and offline sources on a typical day.  Just over a third (38%) rely solely on offline sources, and 2% rely exclusively on the internet for their daily news.

The average online consumer regularly turns to only a few websites.

Moreover, many do not have strong loyalty to particular online sources. When asked whether they have a favorite online news source, the majority of online news users (65%) say they do not.  Among those who do, the most popular sites are those of major news organizations such as such as CNN and Fox.

Internet users use the web for a range of news, but local is not near the top of the list.

The most popular online news subjects are the weather (followed by 81% of internet news users), national events (73%), health and medicine (66%), business and the economy (64%), international events (62%), and science and technology (60%).

Asked what subjects they would like to receive more coverage, 44% said scientific news and discoveries, 41% said religion and spirituality, 39% said health and medicine, 39% said their state government, and 38% said their neighborhood or local community.

News consumption is a socially-engaging and socially-driven activity, especially online. The public is clearly part of the news process now. Participation comes more through sharing than through contributing news themselves.

Getting news is often an important social act. Some 72% of American news consumers say they follow the news because they enjoy talking with others about what is happening in the world and 69% say keeping up with the news is a social or civic obligation. And 50% of American news consumers say they rely to some degree on people around them to tell them the news they need to know. Online, the social experience is widespread:

Some 37% of internet users have contributed to the creation of news, commentary about it, or dissemination of news via social media. They have done at least one of the following: commenting on a news story (25%); posting a link on a social networking site (17%); tagging content (11%), creating their own original news material or opinion piece (9%), or Tweeting about news (3%).

Some 80% of American adults have cell phones today, and 37% of them go online from their phones.  The impact of this new mobile technology on news gathering is unmistakable.  One quarter (26%) of all Americans say they get some form of news via cell phone today–that amounts to 33% of cell phone owners. These wireless news consumers get the following types of news on their phones: 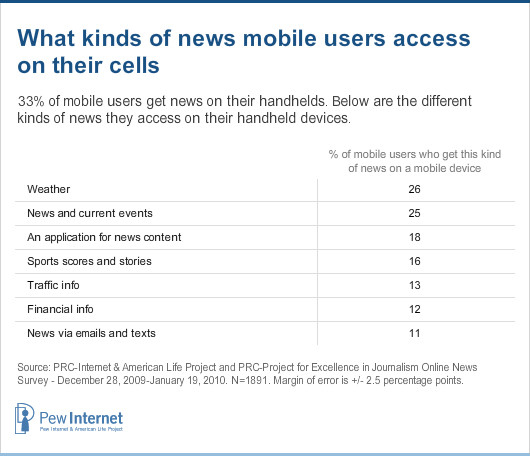 Wireless news consumers have fitted this “on-the-go” access to news into their already voracious news-gathering habits. They use multiple news media platforms on a typical day, forage widely on news topics, and browse the web for a host of subjects.

News is personalized: The “Daily Me” takes shape.

News is easier to follow now, but overwhelming. And most topics get plenty of coverage, in Americans’ eyes.

Americans send mixed messages in the survey about how they feel in a world where news is updated constantly and they can access news all the time. We asked respondents about how the volume of news might play into this: “Compared with five years ago, do you think it is easier or harder to keep up with news and information today?” Some 55% say it is easier, only 18% say it is harder.  One quarter of adults (25%) say there is no difference between now and five years ago.

Yet even as they say it is easier to keep up with the news, Americans still feel overwhelmed. Fully 70% agreed with that statement: “The amount of news and information available from different sources today is overwhelming.” Some 25% “completely agreed” with that statement and 45% “mostly agreed.”

When it comes to the quality of coverage itself, respondents give correspondingly mixed signals. Just under two-thirds (63%) agree with statement that “major news organizations do a good job covering all of the important news stories and subjects that matter to me.” Yet 72% also back the idea that “most news sources today are biased in their coverage.”  Some of the explanation for this dichotomy seems to be rooted in the views of partisans. Liberals and Democrats are more likely to say the big news organizations do a good job on subjects that matter to them, while conservatives and Republicans are the ones most likely to see coverage as biased.