Beyond email, this survey examined a variety of common internet activities that people engage in at home and work—including those with no obvious work-related purpose. While recent studies have shown that email can be a distraction from getting other work done, employers continue to express concern over workplace use of the internet for other activities such as gaming, social networking and online shopping.19 A 2007 survey conducted by the American Management Association found that 65% of companies use software to block employees’ connections to websites they deem inappropriate for work. Among those employers who block content, 61% said they were concerned about employees visiting gaming sites, 50% were concerned about social networking sites and 27% wanted to block employees from visiting shopping and auction sites.20

Nearly one in five employed internet users use instant messaging at work.

Overall, 41% of employed internet users send instant messages.  Just 6% reserve IM exclusively for the office, while 22% report that use IM at home only. Another 12% say they use instant messaging software at both home and work. Looking at the data another way, 18% report at least some at-work use of instant messaging.

The frequency of instant messaging at work varies by the type of communication employees engage in; 20% of employed IM users say they send messages at least once a day to family and friends while they are at work, while 31% say they send messages to colleagues at least once a day at work. Just 3% of employed IM users admit to sending messages “constantly” to friends and family while at work, and 8% say they are exchanging messages with colleagues non-stop.

Men and women are equally as likely to use IM in all settings, but other demographic groups vary significantly in their IM use. Young working adults who are online (18-29) are far more likely to use IM when compared with older users; 56% send instant messages while just 37% of employed internet users ages 30-49 do so. However, those differences are primarily tied to at-home use; the youngest employed internet users are no more likely than 30-49 year-olds to report IM use at work.

Looking across job types, most employed internet users have some experience with instant messaging, regardless of their profession. However, when it comes to at-work use, those in professional, managerial and clerical roles are much bigger users of IM than are those in service, skilled and semi-skilled jobs.

Shopping is among the most popular leisure online activities at work.

While shopping activity at home varies by gender, at-work shopping is equally prevalent among men and women. Wired working women are more likely than men to say they shop online at home only (57% vs. 49%), but comparable numbers of both sexes say they do at least some of their online shopping at work (22% vs. 23%).

While high numbers of working young adults shop at home (67%), they are less likely than their older counterparts to say they shop at work. About one in four employed internet users ages 30-64 do at least some shopping at work, compared with one in eight workers ages 18-29.

The higher an employed internet user’s income and education level, the more likely he or she is to shop online. At-work shopping is also most common among these groups; 35% of those with college degrees make online purchases at their workplace, and fully 41% of those who earn $75,000 per year or more do so.

Online game playing does not vary by gender, but employed internet users who fall into lower earning categories generally report more game playing—a trend that is likely influenced by the youthfulness of these respondents.

Younger employees are the most likely to create and read blogs.

Working men and women are equally as likely to blog, but young adults far outpace older workers in their engagement with blogging. Employed internet users ages 18-29 are more than twice as likely to blog when compared with 30-49 year olds (20% vs. 9%). However, young adults are no more likely to report at-work tending to their blog; just 2% say they blog from work.

Blog reading is also most prevalent among younger generations of employed internet users. One in three internet-using employees (33%) say they have read someone else’s blog or online journal, and 11% report at least some at-work reading. However, among young working adults, 46% are blog readers, compared with 33% of 30-49 year olds and 25% of employed internet users ages 50-64. At-work blog reading is equally prevalent among all of these groups. 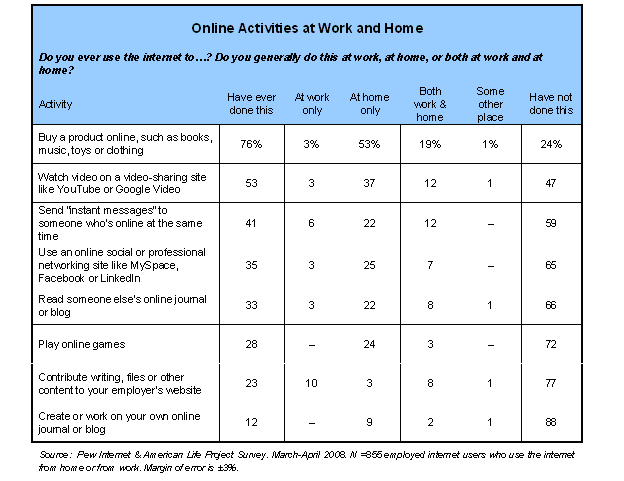 One in ten employed internet users use social networking sites at work.

As is the case with other online activities, most employees say their social networking use happens at home. One in four say their use is restricted to home only, while one in ten employed internet users report at least some at-work use.

Men are more likely to watch videos online from both home and work.

More than half of all employed internet users (53%) say they have watched video on a video-sharing site such as YouTube or Google Video. At-work watching is less common than viewing at home; 15% report at least some online video viewing at these sites from the office, while 49% report some kind of viewing at home. Looking more closely, just 3% say they exclusively watch at work and 37% say they limit their viewing to home only. Another 12% say they watch from both locations.

As is the case with the general population, there exists a gender gap in the working world when it comes to online video watching. A larger share of wired working men count themselves among this segment of the online video viewing audience when compared with wired working women (57% vs. 48%). And while equal numbers of men and women say they watch from home only, more men than women report both home and at-work viewing. Overall, 18% of wired working men report watching at work at least some of the time—2% watch only at work, while 16% say they view videos from both locations. Just 11% of wired working women say they visit online video sharing sites from the office—4% say their viewing happens exclusively at the office, while 7% watch from both home and work.

Similarly, in keeping with trends among the broader internet population, younger workers are far more engaged with online video when compared with older generations. The vast majority, 71% of wired working young adults (18-29), have watched video on a video sharing site such as YouTube or Google Video. In comparison, just 54% of employed internet users ages 30-49 and 36% of those ages 50-64 have watched video on these sites. However, as is the case with social networking site usage, most young adults use video sharing sites at home; young adults are no more likely than older users to say they watch content on video sharing sites at work.

Those in the highest earning and education brackets are the most likely to contribute content to their employer’s website.

Overall, nearly one in four (23%) of employed internet users have contributed writing, files or other content to their employer’s website. Fully 18% report posting content at work—10% say they do so at exclusively at work, while 8% do so from home and work. Another 3% say they contribute content from home only.

Men and women are equally as likely to post writing, files or other content to their employer’s website, and all but the oldest employed internet users (ages 65 and older) report similar experience with contributing some kind of content to the Web for their workplace.

Yet, when it comes to education and earning categories, those in the highest brackets are far more likely to post content to the Web. While 32% of wired working college graduates have contributed writing, files or other content to their employer’s website, just 23% of those with some college education have done so. Similarly, 34% of those in jobs earning $75,000 or more contribute content while just 25% of those earning $50,000 to $74,999 do so.

Next: Attitudes and Impacts of Technology
← Prev Page
Page1Page2Page3Page4You are reading page5Page6Page7
Next Page →

Networked Workers Acknowledgements Snapshots of the Wired Workforce Internet and Email Use for Work
Online Activities at Work and Home
IntroductionNearly one in five employed internet users use instant messaging at work.Shopping is among the most popular leisure online activities at work.Few report playing online games at work.Younger employees are the most likely to create and read blogs.One in ten employed internet users use social networking sites at work.Men are more likely to watch videos online from both home and work.Those in the highest earning and education brackets are the most likely to contribute content to their employer’s website.
Attitudes and Impacts of Technology Methodology