In 2002, the Project’s “Email at Work” report declared that few working Americans who had incorporated email into their work lives felt overwhelmed by it. In fact, most felt their email load was manageable and most were pleased with the way email helped them to do their job. In 2008, while email is still the well-functioning artery of workplace communications in many professions, there is much more to consider when examining work-related use of communications technology. Over the past six years, as internet and email use have grown, so too have the array of devices, applications and complications that arise from their use.

Questions about work-life balance, what counts as overtime work, and the extent to which personal online activity can spill into normal working hours have become more pervasive as the internet is integrated into many workplaces. Even those working in the new media industry are struggling to establish norms for workplace issues that arise with the always-on connectivity that the internet affords. Writers for the television network ABC recently protested a new policy that stated they would not be compensated for any time spent checking email after normal working hours on their company Blackberries.2 However, “normal working hours” no longer exist in many professions, and there are often not clear lines suggesting fair compromises when technology use is so pervasive in and outside of the office. While ABC was trying to avoid paying time-and-a-half overtime for every idle minute that a writer might spend checking for messages, the writers, who can often end up spending hours on work-related exchanges via email at home, were equally concerned that they would not be properly compensated for their work.

Whether in or outside of the office, those who use the internet for work may also see their employers’ monitoring of their online activities grow more restrictive. Firms’ ability to block various kinds of sites is becoming more granular and their reach extends beyond the walls of the office. Many workplaces routinely monitor employees’ in-office use of the internet for various abuses, and advances in security and filtering technology are increasingly giving employers even more options for policing use of the company’s network that may happen from afar.3

This report, based on findings from the Networked Workers Survey, represents the Project’s first dedicated inquiry into the technological assets of today’s workers and their attitudes towards ICT use as part of their job. The Networked Workers Survey was fielded among a nationally representative sample of 2,134 adults in the U.S., including 1,000 self-identified full-time and part-time workers. The survey was conducted by Princeton Survey Research Associates International from March 27 to April 14, 2008, and the margin of sampling error for the complete set of weighted data is ±3%. The margin of error for results based on workers is ±4%.

This survey provides a snapshot of technology use by American workers.

When it comes to particular professions, about one in five employed Americans are professionals, such as lawyers, doctors, teachers, and accountants. Another fifth of Americans works as secretaries, receptionists, sales clerks and in similar office positions. The third most common jobs are those in the service industry, such as waiters, hairstylists, fire or policemen, and janitors, accounting for 17% of employed Americans. Other respondents are divided between business executives and owners, skilled trades such as electricians and plumbers, and semi-skilled trades such as truck and bus drivers. Another 10% of Americans, including consultants, farmers and musicians, do not fit into any these categories (falling into an “other” category referred to throughout the report).

Most working Americans use the internet or email at their workplace.

Among those who are employed, 62% could be considered “Networked Workers” who use the internet or email at their workplace.5 Networked Workers are not only connected while at work, but they are also more likely than average Americans to have access to a wide array of technological assets outside of the workplace. They are more likely to own cell phones, desktop and laptop computers, and personal digital assistants (PDAs).

Networked Workers: The 62% of employed adults who use the internet or email at work

Nearly half of all working Americans do at least some work from home.

While measures of at-home work and telecommuting by government agencies and private research firms have varied extensively, our latest data suggest that the ranks of at-home workers may have grown considerably in recent years.6 When asked how often, if ever, they work from home, 45% of employed respondents in our sample reported at least some amount of at-home work. The segment who routinely work from home is more modest (18% do so every day or almost every day), but 37% of employed Americans say they are working from home at least as often as a few times per month.

Work at home: 18% of employed adults work from home every day or almost every day.

By comparison, a 2006 study conducted by the Harvard School of Public Health found that just 27% of employed respondents were working from home, with 18% doing so at least as often as a few days per month.7

Networked Workers who use the internet or email at their job report higher rates of working at home. Overall, 56% report some at-home work and 20% say they do so every day or almost every day.

Those in the highest-earning occupations are more likely to work from home.

Whether working at home in lieu of going into the office, or simply working extra hours at home, those in the top earning categories are far more likely than lesser-paid employees to do at least some work from home. More than two-thirds (69%) of employed adults earning $75,000 per year or more say they work from home at least some of the time, one in four do so every day or almost every day. By comparison, just 30% of those in jobs earning less than $30,000 per year work from home, and 12% do so every day or almost every day.

Nearly all workers use new information and communication tools in some way.

Beyond those who are actively using the internet or email at their workplace, there is an even larger group of workers who are armed with technological tools that can keep them connected to their jobs outside of normal working hours. Among those who are employed, 96% are in some way making use of new communications technologies—either by going online, using email or owning a cell phone. We refer to these respondents as “Wired and Ready Workers,” as they represent the broader group of working Americans who are using information and communications technologies inside and outside the workplace.

Wired and Ready Workers: The 96% of employed adults who are in some way making use of new communications technologies—either by going online, using email or owning a cell phone.

Most working adults are satisfied with their jobs.

Those who earn the most also report the highest levels of job satisfaction.

Looking at demographics, job satisfaction levels are at their highest among those in the top earning groups. Fully 98% of employed Americans making over $75,000 a year are satisfied with their jobs, significantly more than any other income group. Fully 38% of those in the highest earning bracket say they are completely satisfied with their jobs, and 61% say they are mostly satisfied. That compares with just 31% of those earning less than $30,000 per year who are completely satisfied, and 57% who are mostly satisfied.

Self-employment and certain job types are associated with higher levels of satisfaction.

Job satisfaction may also be related to teamwork. Employed adults who have worked with five or more work groups over the past month (43%) are more likely than those who have worked with just one other group (26%) to be completely satisfied with their jobs. Those who have not worked with other teams are significantly more likely to be dissatisfied with their jobs (12%) than employees who have recently worked with five or more work groups (6%). Job satisfaction does not vary significantly according to company type, internet use at work, number of hours worked, supervisor status or work at home options.

Most workers report little tenure at their current place of employment.

The Department of Labor offers similar statistics with regard to employee tenure:10

Additionally, in 2006, employed Americans ages 25 and older averaged 4.9 years with their current employer, according to the Labor Department.11

Age is also related to the number of hours a person works. Employed 18-29 year-olds (23%) are significantly more likely to work 25 hours or less per week when compared with 30-49 year-olds (11%) and 50-64 year-olds (13%). Employed Americans in the middle age groups are significantly more likely, on the other hand, to work 41-50 hours a week. As noted in the table below, those earning higher incomes also tend to work longer hours. 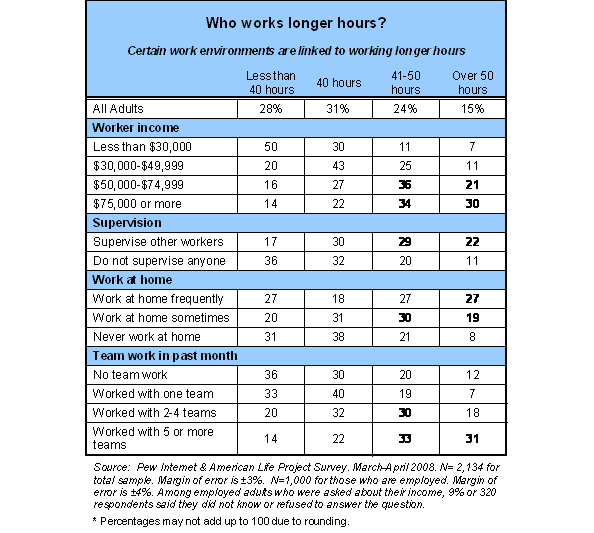 The number of hours an employee works also varies by certain aspects of respondents’ work environment–such as supervision responsibilities, the ability to work at home and whether or not that employee works in teams. For instance, of employed Americans who supervise others, 29% work 41-50 hours a week and 22% work over 50 hours a week—considerably more than those who do not supervise anyone (20% and 11% respectively). Respondents who work at home frequently (27%) or sometimes (19%) are also significantly more likely to work over 50 hours a week than those who never work at home (8%).

Next: Internet and Email Use for Work
← Prev Page
Page1Page2You are reading page3Page4Page5Page6Page7
Next Page →

Networked Workers Acknowledgements
Snapshots of the Wired Workforce
IntroductionThis survey provides a snapshot of technology use by American workers.Most working Americans use the internet or email at their workplace.Nearly half of all working Americans do at least some work from home.Those in the highest-earning occupations are more likely to work from home.Nearly all workers use new information and communication tools in some way.Most working adults are satisfied with their jobs.Those who earn the most also report the highest levels of job satisfaction.Self-employment and certain job types are associated with higher levels of satisfaction.Supervisors are heavier at-work internet users.Most workers report little tenure at their current place of employment.Two in five American employees works overtime.Certain demographic groups, occupations and work environments tend to work longer hours.
Internet and Email Use for Work Online Activities at Work and Home Attitudes and Impacts of Technology Methodology