Most working Americans use the internet or email at work.

Just over half of American adults (53%) say that they are currently employed with full or part-time work. Among those who are employed, 62% could be considered “Networked Workers” who use the internet or email at their workplace.

Networked Workers are not only connected while at work, but they are also more likely than average Americans to have access to a wide array of technological assets outside of the workplace. They are more likely to own cell phones, desktop and laptop computers, and personal digital assistants (PDAs). Among Networked Workers:

Nearly half of all working Americans do at least some work from home.

In our latest survey, 45% of employed respondents in our sample reported at least some amount of at-home work. The segment that routinely works from home is smaller: Some 18% of job-holding Americans work at home every day or almost every day. However, 37% of employed Americans say they are working from home at least as often as a few times per month.

Networked Workers who use the internet or email at their job report higher rates of working at home. Overall, 56% of Networked Workers report some at-home work and 20% say they do so every day or almost every day.

With workplace internet use, Americans tend to be always on or always off.

Workplace internet users tend to either use the internet every day or not at all. A large majority of the population can be found at either end of the spectrum – using the internet at work every day (60%) or never (28%). By contrast, few (5%) use the internet just once every few days at work and only 6% use it occasionally, but even less often than that.

Internet use at work varies by company type and profession.

Internet usage on the job also tends to vary by a person’s chosen field of work. Nearly three out of four professionals and managers or executives use the internet at work, either constantly or several times a day. About half of clerical, office and sales workers also use the internet at work at least several times a day. Service workers and those in the skilled trades are far less likely to report internet use at work.

Nearly all workers use new information and communication tools in some way.

Beyond those who are actively using the internet or email at their workplace, there is an even larger group of workers who are armed with the technological tools that can keep them connected to their jobs outside of normal working hours. Among those who are employed, 96% are in some way making use of new communications technologies—either by going online, using email or owning a cell phone. We refer to these respondents as “Wired and Ready Workers,” as they represent the broader group of working Americans who are using information and communications technologies inside and outside the workplace. Among the working population:

Overall, 73% of all workers use all three basic tools of the information age: they use the internet, have an email account, and have a cell phone.

While working Americans largely hold positive views about the role of information and communications technology (ICT) in their lives, many say there are tradeoffs in being networked. On the one hand, they cite the benefits of increased connectivity and flexibility that the internet and all of their various gadgets afford them at work. However, many workers say these tools have added stress and new demands to their lives.

Wired and Ready Workers: The 96% of employed adults who are in some way making use of new communications technologies—either by going online, using email or owning a cell phone.

On the upside, a large majority of Wired and Ready Workers note big improvements in their work lives due to the influence of technologies such as the internet, email, cell phones and instant messaging.

At the same time, half of Wired and Ready Workers note various negative impacts of communications technology on their work life:

Those who are most tethered to work are more likely to say that their gadgets and connectivity have increased demands that they work more hours.

Professionals and executives own more gadgets.

Professionals, managers and executives are more likely than other workers to own gadgets, especially higher-end gadgets such as laptops and personal digital assistants (PDAs) such as Palm Pilots or Blackberries. Fully 30% of people in these professions own (PDAs) and nearly two out of three own laptops, significantly more than employed Americans in any other field of work.

Americans juggle work and email accounts, checking both throughout the day in many cases.

More than half of working adults (53%) have both personal and work email accounts. And while 22% say they only maintain personal addresses, just 5% say that their email use is limited to a work account.

In recent years, workers have become more likely to check their email outside of normal working hours.

Since 2002, working Americans have become more likely to check their work-related email on weekends, on vacation and before and after they go to work for the day.1

Among Blackberry and PDA owners, all of these numbers are much higher. Checking work-related email outside of normal working hours is the norm for many of these gadget users, even during weekends and vacation time.

One in five employed email users and half of Blackberry and PDA owners say they are required to read and respond to work-related emails when they are not at work.

The off-hours checking of work-related email is not an act generated solely by the volition of the employee. Some 22% of employed email users say they are expected to read and respond to work-related emails, even when they are not at work. Blackberry and PDA owners are more than twice as likely to report that their employer expects that they will stay tuned in to email outside of the office. Fully 48% say they are required to read and respond to email when they are away from work.

Yet, few workers feel as though email alone has increased the total amount of time they spend working

Other online activities capture workers’ attention at the office.

Shopping is among the most popular online leisure activities at work, with 22% of employed internet users reporting at least some at-work purchasing. At the other end of the spectrum, activities such as online gaming and blogging typically happen at home (see table on the following page for details).

Working men and women are equally as likely to blog, but young adults far outpace older workers in their engagement with blogging. Employed internet users ages 18-29 are more than twice as likely to blog when compared with 30-49 year olds (20% vs. 9%). However, young adults are no more likely to report at-work tending to their blog; just 2% say they blog from work.

Blog reading is also most prevalent among younger generations of employed internet users. One in three internet-using employees (33%) say they have read someone else’s blog or online journal, and 11% report at least some at-work reading. However, among young working adults, 46% are blog readers, compared with 33% of 30-49 year olds and 25% of employed internet users ages 50-64. At-work blog reading is equally prevalent among all of these groups. 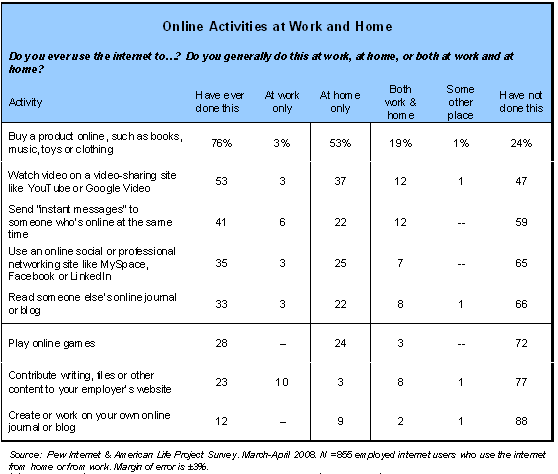 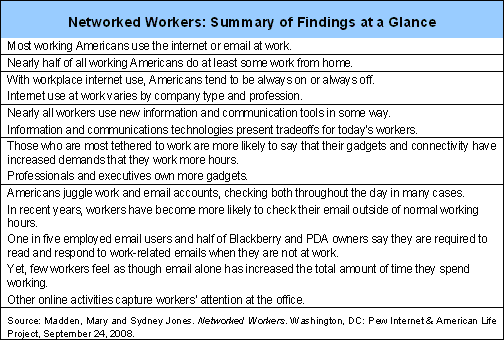