Americans incorporate IM into their repertoire of interpersonal communication.

IM serves as an additional mode of communication for individuals in the same location.  Nearly a quarter (24%) of IM users report that they have instant messaged someone in a physically close location, such as a home, office, or classroom.  The silent aspect of using IM is especially appealing for individuals who wish to communicate secretively.  When asked how frequently they set-up group conversations on IM, 87% of instant messengers say they do so only once every few months or less often.  IM remains a way for two people to converse, while chatting occurs in other venues.

According to the February 2004 survey, male IM-ers are more likely than female to send an IM to someone in the same location (29% vs. 19%).  This is particularly striking given that online women and men report using IM in roughly equal proportion.

Gen Y-ers are the most avid multi-taskers, but a substantial number of older IM-ers divert their attention to other computer-related tasks, as well.  Forty-nine percent of the Y generation report conducting other computer-related business every time or almost every time they IM.  The next highest group of individuals are Gen X-ers, at 32%. For older generations, the percentage of each age cohort is even smaller.

Fewer IM users conduct non-computer-related activities, such as talking on the phone or watching TV while IM-ing—20% engage in other activities all the time and 30% some of the time. 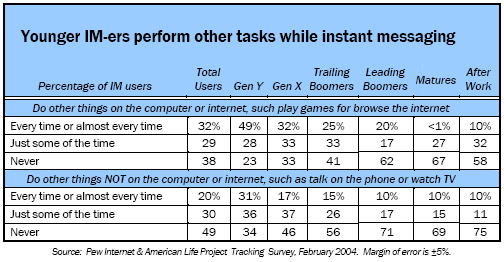 Not surprisingly, among all instant messengers a greater number of online Gen Y-ers (25%) than members of any other age group have IM-ed wirelessly.

Frequent IM-ers are more likely to have IM-ed wirelessly than occasional instant messengers.  IM-ers who log onto the internet daily and IM for longer periods of time are more likely than those who do so less frequently to have IM-ed via a wireless connection. Daily IM-ers (22%) and those who instant message several times a week (20%) have IM-ed wirelessly. A fifth of IM-ers who have spent 15 minutes to an hour logged onto IM have instant messaged using a wireless device, and a quarter of IM-ers who have spent more than an hour online have chatted with others wirelessly.